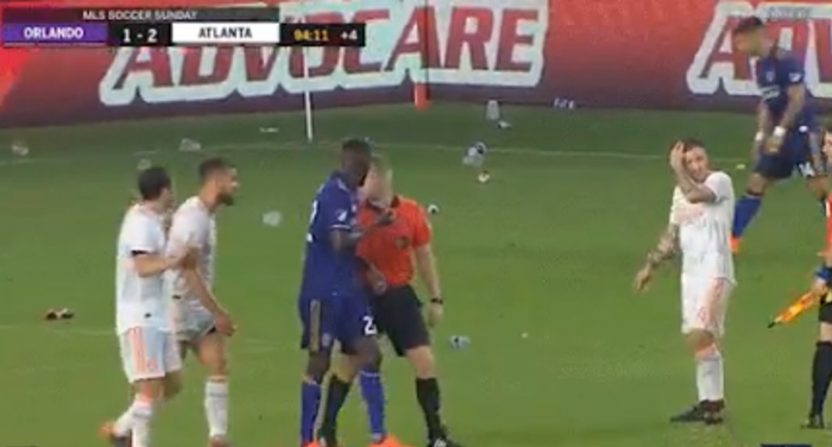 Orlando City SC and Atlanta United are in their fourth and second MLS seasons respectively, and they’ve already developed quite a rivalry. However, that rivalry got pretty ugly late in Sunday’s match in Orlando. With Atlanta United up 2-1 in stoppage time, Orlando City’s Will Johnson went on a run towards the opposing box, and then went down around a tackle from Atlanta’s Leandro González Pirez. But the ref ruled that Johnson had dived, and he was given a yellow card for dissent following his protests:

This then led to Orlando fans throwing a ton of trash on the field:

And after the final whistle blew shortly afterwards to give Atlanta the 2-1 win, it perhaps got even worse, with fans showering Atlanta players with beer and throwing cups at them:

Thanks for the shower 👌 pic.twitter.com/buDjhoALo4

That could lead to punishment for the club, and for the fans involved. For their part, the club issued a statement condemning this behavior Sunday evening:

Orlando City SC does not support or condone the unacceptable actions taken by fans at Orlando City Stadium during Sunday’s match against Atlanta United. Fans are strictly prohibited from throwing debris or objects onto the field. The Club is using available resources to identify offenders, who will be penalized for their behavior in accordance with Major League Soccer and Orlando City Stadium regulations.

Orlando City SC takes great pride in the passion of its supporters and how they make Orlando City Stadium the most difficult venue to play at in MLS, but the safety of fans, players, officials and staff members is our top priority.

Passion’s all well and good, but throwing things at officials and opponents crosses a pretty significant line. That shouldn’t be happening, regardless of your feelings on a particular call.