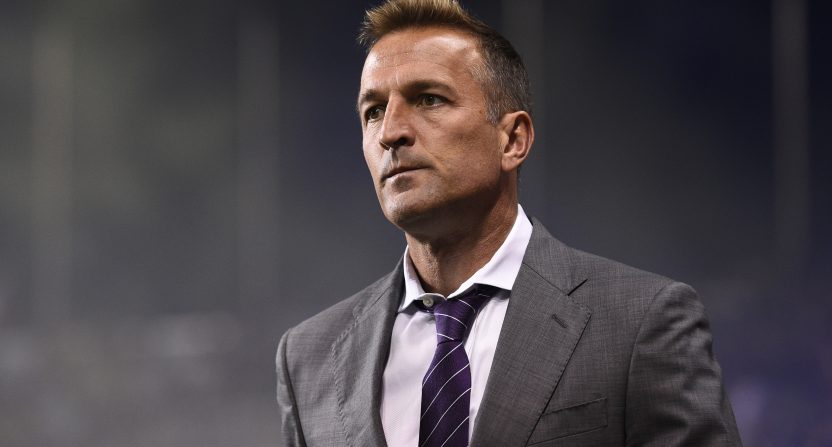 Orlando City have long been one MLS’ most confusing teams. They’re streaky and switch between energetic attacking spells and disastrous defensive performances. They’re youthful, but their academy has not yet been sufficiently productive. Even after this offseason’s TAM-fueled rebuild, the line between a lack of talent and underperformance is blurry.

At the root of it all, though, is simply performance, and through the entirety of Orlando’s MLS existence, that has not been good enough. Now in their fourth year, they’ve yet to make the postseason. And after a strong start to 2018, they have lost six straight in MLS. They will move onto their third coach in four years after Jason Kreis was let go on Friday.

Perhaps undeservedly, OCSC have gained a reputation as being “quick to the trigger” for the firing of their first coach, Adrian Heath, in July of 2016. Letting Kreis go so early in this new-look iteration of the team furthers that reputation.

Kreis, most notable for his success at the turn of the decade with Real Salt Lake, tried his darndest to implement his favorite 4-4-2 diamond formation. It never quite panned out. He got Will Johnson, the famously intense midfield shuttler from those RSL days, to go to Orlando, and they signed players like Yoshimar Yotun to fill that role as well. But they always looked significantly better in a 4-2-3-1.

The diamond formation was Kreis’ one attempt at forming a real tactical identity. There was not one present otherwise. Abandoning that new-ish tenet of MLS management was, put lightly, an oversight.

Orlando had arguably the best offseason in MLS. They got rid of Carlos Rivas-type dead weight and acquired a variety of new, better contributors through outside transfers and intra-league trades. Sacha Kljestan and Justin Meram joined Dom Dwyer in a rebuilt attack based around historically productive MLS veterans and went young with Paraguayan Josue Colman and Fire Homegrown Cam Lindley.

They even tried to fix a slow, mistake-prone defense that relied almost completely on 32-year-old Jonathan Spector last year. Mohamed El-Munir and Lamine Sane were among the defenders signed for this season.

Those defenders have not panned out. El-Munir struggles to get through a game without making a bad mistake. Sane has been injured for half the season and hasn’t looked that good when in the lineup. Amro Tarek and Chris Schuler have not adequately replaced the oft-injured Spector, who has struggled with concussions for much of this season. Johnson was moved to right back, a position he does not play.

The attack is talented, on paper, and looked okay with rookie Chris Mueller in the starting lineup during an early season win streak. But it has gone stale, particularly in the weeks leading up to Kreis’ dismissal, and it is hard to pinpoint exactly why. At times it has been congested with Meram invading Kljestan’s space. Distribution out of midfield can be inconsistent and mistake-prone.

There’s no doubt that the attack has not been as good as it could be, however, and when that can be said about any aspect of a team, the coach is usually to blame. Kreis has not been able to get the best out of this new Orlando team, and for a club desperate to find success, he was not afforded more time to figure it out.

Signs of progress and improvement are lacking, to an extent rationalizing Orlando’s seemingly rash decision. But Kreis never was afforded the opportunity to build a playoff-caliber defense, and much of OCSC’s struggles this season have come with major injuries and absences hampering the lineup. Not everything was his fault.

We should also remember that while accountability is desirable, and something MLS perpetually needs more of, this league is uniquely forgiving. Orlando, despite their six-game losing streak, are still in sixth and within reach of higher places. Even with Toronto FC sleeping behind them, they very well could have made the playoffs with Kreis at the helm.

This decision was made with a “win now” mentality in mind. Orlando have some good young players and are set up well enough for the future, but at the core of this decision was a desire to get something out of the aggressive transfers they made in the winter, and to finally find some level of success and legitimacy at the MLS level.

On a macro level, this is an acceptable decision — Orlando did not see immediate or long-term potential in Kreis, and decided to get rid of him early enough to get new blood in for the rest of this season. Whether there is potential in Kreis, short term or long term, is debatable.

What is for sure, though, is that Kreis was not given a whole lot of time to give us a concrete answer to that question. And so Orlando begin another search for a coach, an identity, and an end to ambiguity.