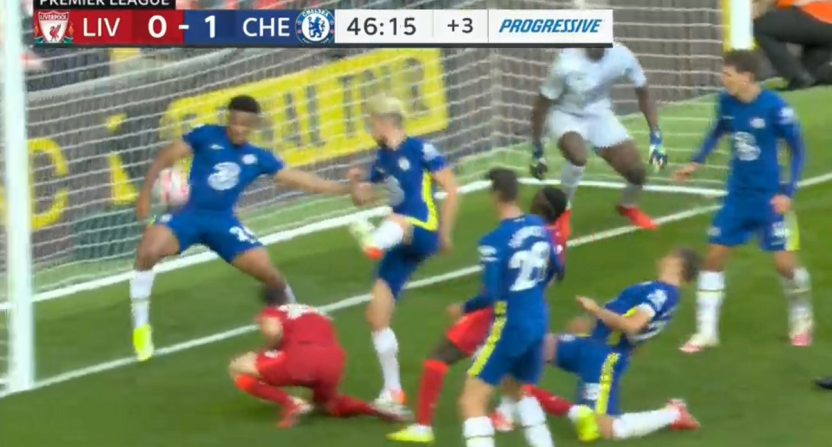 Chelsea and Liverpool have played an incredibly fast-paced match today at Anfield, with a frenetic back-and-forth nature that feels as much like quidditch as it does soccer/football.

Chelsea opened the scoring via this Kai Havertz header, the kind of weird angle looping goal that feels like it should happen more often, if even by chance:

Near the end of the first half, Liverpool threatened to equalize via a wild sequence in front of Chelsea’s goal, that saw the Blues deny multiple times on the line. That included a sketchy-looking Reece James block, which drew immediate shouts for handball.

That did look pretty clear upon replay:

here's that Reece James red card decision. I see his hand move but I don't think he hits the ball with his hand. the intent seems there though. pic.twitter.com/SlrNzj80XZ

When the decision went to VAR, referee Anthony Taylor didn’t even bother looking at a full replay before awarding a penalty, although he went a step further and awarded a straight red to James:

So now we are judging from still frames & not using ⏪ or ⏩.

That caused a lot of online consternation, as the full speed replay paints a very different picture than a still shot of a ball hitting James on the arm. The ball was deflected off his leg, after all, and he didn’t have many other options for where to move his arm before being hit by the strike.

Mo Salah stepped up for the penalty and slotted it into the corner:

(Side note: driven penalties along the ground look so, so boss.)

The equalizer was certainly deserved there; it’s hard to deny that James prevented a goal with his arm, which was at least somewhat away from his body. Whether it was fair to award him a straight red is another story, though, as well as how fair that decision was based on nothing but a cursory glance at an image.

For neutral fans, it’s potentially very disappointing; the match was shaping up for a fantastic second half finish with both teams trying for the winner; now, with Liverpool up a man, things will probably play out a lot differently.