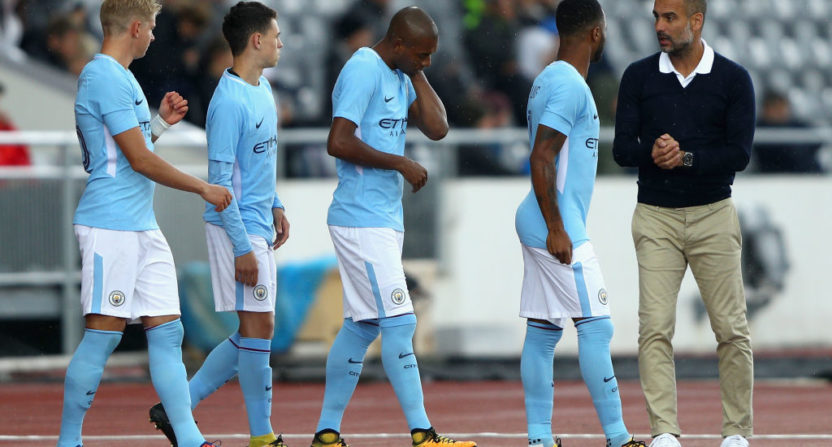 Last season was arguably the worst of Pep Guardiola’s managerial career. City barely made the top four and struggled in Europe. They were bounced out of the Champions League in the last 16 by upstart Monaco. It was the first time he’s failed to reach the CL semifinal. Worst of all, it was his first trophyless season in his time as a coach. Life in England wasn’t easy for Pep.

Heading into his second season, Guardiola will attempt to rectify that lack of success. However, Guardiola’s ability to win trophies this year will come down to the players on the pitch. City has not been shy about opening the checkbook this summer and the Spaniard looks to have a deep squad for the coming campaign.

In the previous season, it seemed that Guardiola tried to rely on a number of players that were north of 30. His fullbacks became a particular problem, with Bacary Sagna and Pablo Zabaleta both having poor seasons. At 34 and 32, respectively, the two wide defenders were rapidly declining. Neither had the tempo or passing ability to make for successful fullbacks in Guardiola’s system.

It’s not surprising, then, that City spent over $120 million on a pair of fullbacks. Kyle Walker arrived from Tottenham, and Benjamin Mendy came from French champions Monaco. Both players should be first team regulars for Guardiola.

In the midfield, Man City had players like Kevin De Bruyne and İlkay Gündoğan, but the latter having injury troubles all season. The German international has had plenty of bad luck with injuries throughout his career, but a healthy campaign from him will be a huge boost for Guardiola. De Bruyne, who was one of City’s star players last year shouldn’t have any trouble repeating his performance last year.

The Belgian tallied 23 assists to go along with seven goals in 2016-17. He was asked to do some heavy lifting as the midfield depth wasn’t quite as deep as Guardiola had been used to at Bayern and Barcelona.

Guardiola had to surround De Bruyne with players like Yaya Toure, Fernandinho, and David Silva. All three were 31 or older. City’s midfield last year had plenty of world class talent, but age was the issue. Guardiola also went out at brought in Bernardo Silva, again from Monaco. Silva will certainly push out some of the older players in the squad while giving some competition for winger Leroy Sane.

Manchester City’s goalkeeper situation was akin to a soap opera last season. Guardiola didn’t endear himself to City fans by casting out Joe Hart almost immediately. Guardiola considered the English number one to be a liability. Hart, who isn’t the best with his feet, didn’t really fit Guardiola’s style of play. The Spaniard showed little sympathy for Hart and brought in Claudio Bravo, who was more in line with what his coach wanted.

The problem was Bravo might have been good with his feet, but stopping shots turned into a real problem for the Chilean. He had a tremendous summer with Chile but he had trouble last year with his club.

Claudio Bravo at the 2017 Confederations Cup:

After upgrading the defense and midfield, the keeper position is the one big question mark for City. Bravo stopped just 72% of shots last season, and that won’t be good enough again. Manchester City did bring in Ederson from Benfica for a sizeable transfer fee. The 23-year-old will try to push Bravo, and a little competition here is a good thing for Guardiola. If Bravo can elevate his game, and play like he did for Chile in the Confederations Cup with Ederson playing up to his transfer fee, then City will not have a keeper problem but a keeper surplus.

Considering how much Manchester City have spent over the past two season there really shouldn’t be any excuses. On paper, this is a deep squad that got younger. All the positive moves they’ve made this year and that doesn’t even factor in players Sergio Aguero and Gabriel Jesus. The two South American’s will lead the line at the Etihad. If Bernardo Silva and Sane have strong seasons and Raheem Sterling continues to blossom under Guardiola, then Man City will have a terrifying attack.

Defense wins championships, however. Guardiola had an aging back line a year ago, with a shaky keeper behind them. Manchester City has gone to great lengths to shore up their obvious weakness and, on paper, have put together a great defense. Fullbacks are massively important to Guardiola. Philipp Lahm and David Alaba were passing and ball winning machines for the Spaniard in Munich. Guardiola likes the versatility that fullbacks can provide.

With this position nicely shored up in Manchester, it should allow the team to play a much more Guardiola style.

Guardiola now has the tools he needs to remind everyone why he was so highly sought after. If Guardiola can use his tactical acumen to turn his strong side into a string of solid results then it could paint England and the continent a shade of sky blue. Anything else this season is a failure and a blow to Guardiola’s lofty image.