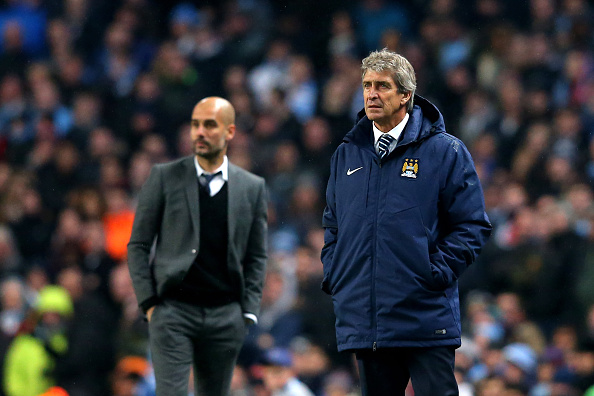 In a way, Manuel Pellegrini was always a lame duck. A full year before Manchester City hired him to replace the fired Roberto Mancini as its manager in 2013, it had decided the man it really wanted was Pep Guardiola.

City acknowledged as much on Monday as it announced that it had finally landed its long-time target to begin as manager starting with the 2016-17 season. “These negotiations were a re-commencement of discussions that were curtailed in 2012,” the club wrote in its press release.

This confirms a widely-held belief, which was never all that surprising, considering that the bulk of City’s soccer brain trust was poached from Guardiola-era Barca. But where does it leave Pellegrini, who won the club’s second Premier League title in three years in his maiden season and could well win another before he’s booted out the back door? He’d gotten a one-year contract extension less than six months ago, prolonging his deal through next season. But even back then, this was largely seen as an attempt by the club to give recourse to the view that he was a placeholder.

And indeed, reading through the remainder of City’s statement that’s looking like a fair assessment. “Out of respect for Manuel Pellegrini and the players, the Club wishes to make its decision public to remove the unnecessary burden of speculation,” it wrote. “Manuel Pellegrini, who is fully supportive of the decision to make this communication, is entirely focused on achieving his targets for the season ahead and retains the respect and commitment of all involved with the leadership of the Club.”

This may sound supportive, and maybe it’s meant that way. But it reveals an awful lot about Pellegrini and his place at the club. In spite of his long track record of success – most notably with Villareal and Malaga, where he performed admirably in a season spent submerged in the Real Madrid cauldron – he was never going to be The Guy. Just the guy they employed before the finally landed The Guy – whether it be Guardiola or perhaps, once upon a time, José Mourinho.

Note, for instance, that the club felt the need to point out that Pellegrini “retains the respect and commitment” of the club. If that’s true, does it really need to be said? And if he really did command the club’s respect, why would it be looking for another manager when he is, at present, just three points removed from the Premier League lead, still active in the Champions League and FA Cup, and in the League Cup final? As for commitment, well, that’s not really the same thing as this bigamous soccer manager arrangement, is it?

So now what? What happens when the club’s manager has been professionally executed yet is expected to remain alive long enough to see out the season and continue to perform in it? Is he a lame duck? Certainly. Is the entire season now lamed? Possibly.

Because this can shake out one of two ways. The players can give up on their manager, as their club essentially has, and decide he isn’t worth fighting for anymore. Or they can react the way Bayern did when it was announced mid-way through 2012-13 that their manager, Jupp Heynckes, would be replaced by one Pep Guardiola at the end of the year. Bayern romped to the first treble in the club’s history, winning the Bundesliga, the DFB-Pokal and the Champions League before Heynckes was waved off.

Heynckes’ own summer appointment, meanwhile, had been announced in March of 2011, while current Manchester United boss Louis van Gaal was still in charge. Bayern, however, then went from bad to worse and van Gaal had to be sacked in April, just a month before the end of the campaign.

Here’s another wrinkle to consider: what if City regroups and wins the league for a third time in five years, and a second in three under Pellegrini? What if it does the totally conceivable and beats Dynamo Kiev in the round of 16 in the Champions League, consequently making this the club’s most successful campaign in the premier continental competition? What if City reaches even further? What if it wins it? Weirder things have happened. What if City wins it over Pep’s current Bayern side? That might break a new record for weird.

Announcing the replacement for an employee who hasn’t yet left, and isn’t leaving by choice, is awkward enough. (Although Pellegrini has claimed he’d known this was coming. Then again, how could he not have? The whole world did.) But he might yet outperform his replacement.

Or, worse still, his final months might see the club’s performance spiral downward and undo a solid first half to the year.

Either way, it’s hard to see the benefit of making the Guardiola announcement when City did. If he was under contract anyway, what was the rush? What possible good could come of it?