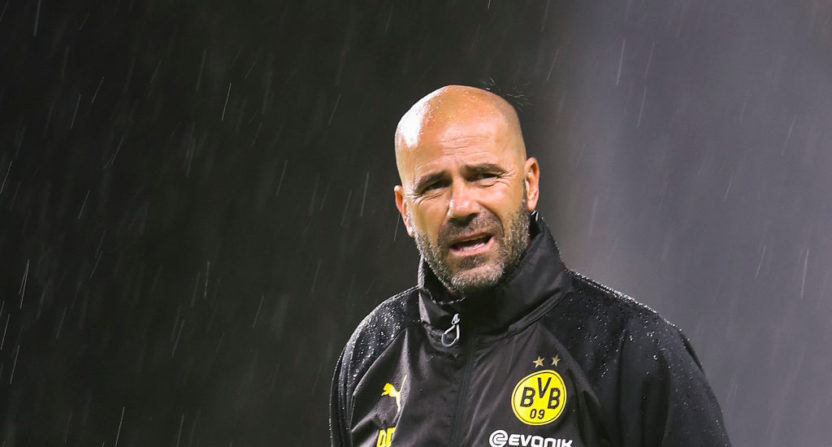 Borussia Dortmund has not won a Bundesliga match since September. Once six points ahead of Bayern Munich, BVB now find themselves in fifth place, eight points back of the league leaders. At the heart of this problem is Peter Bosz, the Dutch manager who replaced Thomas Tuchel in the summer.

Bosz came over from Ajax, after leading the Dutch side to the Europa League final. The hope was that the new boss could provide some stability. After the public falling out between Tuchel and the Dortmund board, the club needed some leadership in the dressing room. Up until October, it looked like Bosz was the answer. Dortmund was unbeaten for the first seven matches. The club didn’t concede a goal until matchday six. And with Bayern looking a shell of themselves under Carlo Ancelotti, Dortmund looked like they could end the Bavarian’s run as German champions.

Over the past two months, however, Dortmund have gone into such a slide that they have dropped out of the top four. Bosz’s seat is hotter than Ancelotti’s was when he fired back in September. With many people wondering why Bosz hadn’t already been shown the door he was going to need a big performance against bitter rival Schalke 04 to save his job. He got just that, for 45 minutes. Then it fell apart.

This past weekend’s Reiverderby was always going to be an exciting prospect. In the US, the match was billed as a meeting between Dortmund’s Christian Pulisic and Schalke’s Weston McKennie. The two young Americans both featured in the starting lineup and helped make the match an instant classic. Dortmund’s strong start sent them into the dressing room with a four-goal lead. This was exactly what Bosz needed. Though joy at the Westfalenstadion was short lived.

Schalke came out in the second half and scored four unanswered to level the game, leaving Dortmund still in search of their first win in months. Everything went wrong for Dortmund in that half, in fact, the game as a whole was a microcosm of their season. They came out swinging with four goals before absolutely falling to pieces. After giving two goals at the start of the half, Pierre-Emerick Aubameyang picked up a second yellow and Dortmund would have to play with ten men.

Daniel Caligiuri left Dortmund fans biting their nails when he made it 4-3 shortly before full time. BVB we holding on for dear life at this point and it wasn’t long before everyone in black and yellow had their worst fears realized. A late corner deep in extra time saw Schalke centerback Naldo head home the equalizer. The match itself was fantastic for a neutral. For Schalke, it was a 90-minute helping of Schadenfreude. But for Dortmund, it was a glimpse at everything going wrong at the moment and seemed like the final nail in Bosz’s coffin.

Dortmund has been able to fill the net, but their recent defensive problems were on full display here. Bosz’s team has been subject to falling apart rather easily. His stubbornness in sticking with what isn’t working has resulted in a massive dip in form. With a team featuring some truly great players it’s not hard to wonder if Bosz has lost the support of his players, who don’t seem particularly inspired.

Trouble in the dressing room

With a talented team, Bosz should be doing much better, and that will likely cost him his job. His handling of his star player Aubameyang is perplexing. Bosz seemed to have alienated the striker and suspended him for disciplinary problems. While a coach isn’t going to bend over backward to make a player happy at the expense of the team, Aubameyang’s discontent seems strange. He has been in strong form this season, but the relationship with the club seems precarious. Dortmund would have an even tougher time this year without their pacy striker. Bosz hasn’t been able to keep his best player happy and it doesn’t seem like Aubameyang is the only one annoyed with his coach.

The handling of other talented players like Julian Weigl has left many scratching their heads. The 22-year-0ld German has been curiously used this season. Bosz seems to have no idea how best to use the midfielder who was one of the league’s breakout stars under Tuchel. Last year, Weigl averaged upwards of 80 passes a match as he controlled the game in the middle of the park. Against Schalke, Weigl completed just 16. Bosz’s preferred wing play in a 4-3-3 this season has left the young man isolated in the center.

To be fair, with players like Pulisic and Andriy Yarmolenko playing out wide it would make sense to try to incorporate the wings. However, Bosz has done this at the expense of other areas of the pitch. Weigl and Mario Götze have had little impact this season. Specifically, with Weigl, you have a player that can link play between each wing, providing a valuable tool to create overloads and launch counters for Dortmund’s speedy attack.

All these problems now factor into the long-term success of the club. With Bayern Munich looking like a good bet to grab their sixth straight Bundesliga title and Dortmund’s struggles, it’s hard to entice big names to come to Dortmund. More concerning it might be hard to keep big names from leaving at this point. Aubameyang seems like he’s going to be leaving sooner rather than later. But what about players like Weigl, Pulisic, and Mahmoud Dahoud? These are talented young players who have piqued the interest of Europe’s biggest clubs. Does the fact that there seems to be so much turmoil in Dortmund scare them away in the future?

Catching back up to the competition

Bayern Munich is Dortmund’s measuring stick. While they will admonish the German champions publicly, deep down it’s who they wish they were. Bayern fired Ancelotti when the Italian had lost one league game all season. Dortmund lost four and their Champions League campaign is over.

Dortmund wanted a coach who would get along with management and defeat the “evil empire” in Munich. Instead, Bosz has been a mess tactically and a suspect man manager. This is a club that is only five years removed from a Champions League final appearance. Dortmund is in real trouble of getting left further in Bayern’s dust and even clubs like Schalke and Leipzig if they aren’t careful. Dortmund needs to make some kind of change to try and turn this around. The first step is showing Bosz the door.

So what’s the hold up?