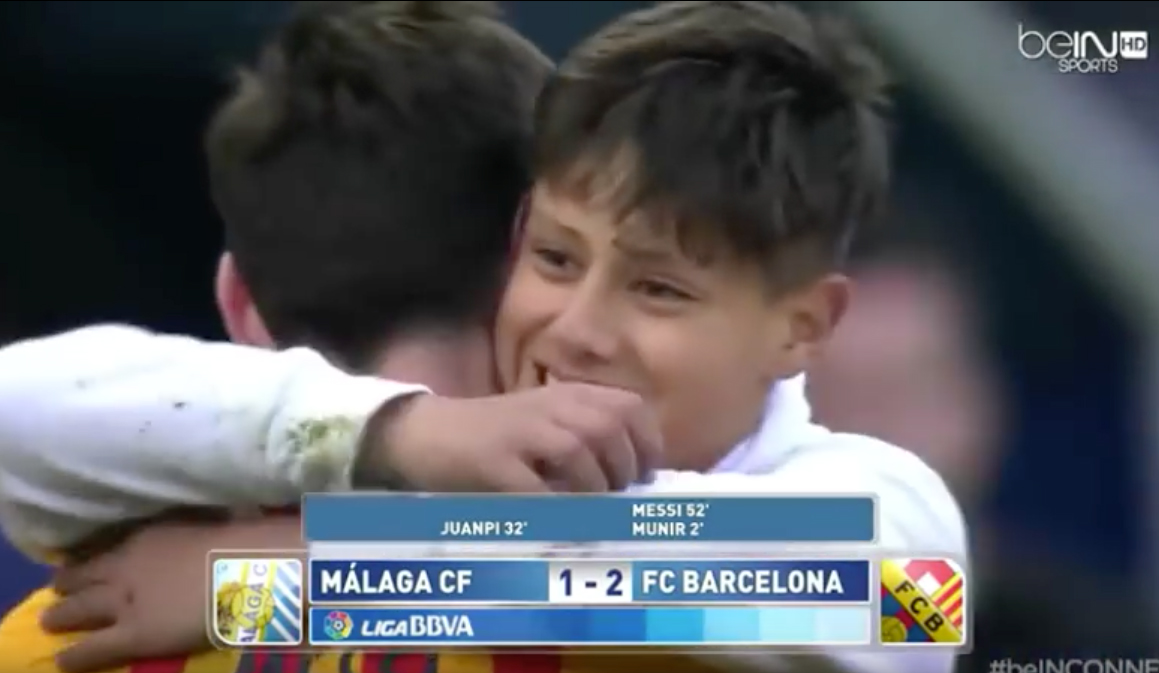 In the history of sports, there are few stars bigger than Lionel Messi of FC Barcelona. Everyone wants a piece of him, from companies seeking endorsements to fans seeking any piece of him at all.

One young fan took it to a different level after last weekend’s 2-1 win for Barcelona over Malaga in La Liga play. He invaded the pitch and was able to get right up to Messi, giving him a hug.

Messi responded with his shirt off his back, handing it to the kid as he was taken away by security. It seems, though, the youngster didn’t leave the Malaga stadium with a famous game-worn Messi shirt. Instead, it is being alleged that the security actually took the shirt from him before getting him out of the stadium.

While the shirt-snatching by security isn’t exactly a great look, neither is invading the pitch. Yet, as the video above shows, Messi and other stars are all-too-familiar with the practice and don’t even seem phased by it all.

Barcelona’s security did a great job of protecting Messi once they realized what the fan was doing, but the stadium even allowing a single invader of the pitch is mind-boggling in this day and age. En masse pitch invasions have been nearly stamped out across most of club soccer, but individual pitch invasions are still very common.

The mindset towards these actions are probably best demonstrated by the questions raised by those who know the boy in question in the Messi incident.

According to the 101GreatGoals report, here is what was posted on Facebook from the mother of the young kid’s friend:

This child’s name is Kevin, he is 15 and is a friend of my son, Diego.

Messi gave him his shirt and the security officers at the Rosaleda stadium took it away from him. It’s outrageous, what do they get out of destroying a boy’s happiness?

Take away his happiness? How about the safety and security of Messi, or any other player or coach on the pitch? How is Messi or anyone else on the pitch supposed to know the boy doesn’t have a knife or want to harm him instead of love him?

It wouldn’t be the first time that has happened, heck even some fans have jumped in to the coaches box to attack coaches in the middle of a match.

What if every fan in the stands wanted a hug, or a jersey? Yet, players seem all-too-calm about these situations, including giving away jerseys or other products to those involved. Perhaps it comes out of an effort to get the person away from them, but it also serves as an example of what can be had by others who invade the pitch.

Famous names like Zatlan Ibrahimovic and Franck Ribery have met similar invasions with the shirts off their backs. It has even stretched to places like Serbia.

Here in America, those who invade stadium grounds are often found punished courtesy of a 250-pound linebacker making him famous for being an idiot. There’s no giving of a glove or jersey or anything at all, instead the person pulling the stunt is hunted down and taken down by whatever means available.

Perhaps the rest of the world could help stop this by ignoring those who invade the pitch instead of being rewarding them for it.

There’s no way to stop actions like this from happening in all cases, except for, you know, better security who actually do their jobs. But the frequency of pitch invasions can be lowered with better policies and less comfort from players. Loving your club is one thing, putting the safety of said club’s players and coaches in jeopardy is a whole different story.