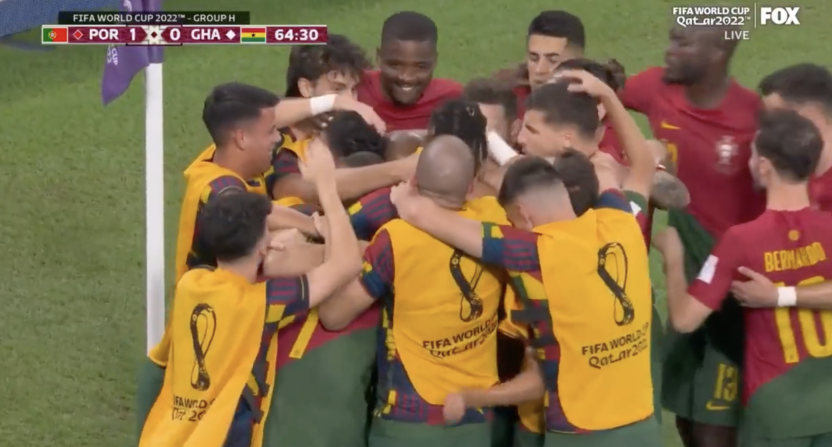 Portugal and Ghana started off just seven other matches did during the 2022 FIFA World Cup – with a scoreless first half. There were just 34 goals scored through 14 and one-half matches of action – 2.34 per game. The lowest-scoring World Cup ever was in 1990 at 2.21 goals per game.

Thankfully these teams were not interested in making that kind of history, combining for five goals in the final half-hour of the match. It started in the 61st minute, with Cristiano Ronaldo making history as the first man to score in five World Cups.

With this goal, he becomes the first men's player to score in five different FIFA World Cup tournaments 🔥🇵🇹 pic.twitter.com/PxWP4Z5z8o

Just eight minutes later, Ghana equalized, and the game was back on.

The scoreline only stayed even for about five minutes. At this point, Bruno Fernandes decided to put his stamp on the match, sending a through ball to João Félix who took a dribble and fired it home to put Portugal up 2-1 while Ghana players and fans were still celebrating.

Portugal takes back the lead! 😱 pic.twitter.com/hACF3YRDAa

The magician from Manchester United dipped into his bag of tricks again. This time, he made a deep run, drawing the defenders toward him before laying it off to Rafael Leão, who tucked it away for a goal, just three minutes after coming on.

ANOTHER GOAL FOR PORTUGAL 🇵🇹🔥

The Black Stars made sure stoppage time was exciting, pulling one back in the 89th minute.

GHANA TAKES ONE BACK 🇬🇭 pic.twitter.com/iKqjAwOqfF

Unfortunately for them, the scoring stopped there and Portugal got its first opening group stage game win since 2006. But Ghana nearly shocked the world with a late equalizer in a play straight out of the schoolyard.

We almost had a MASSIVE blunder by Portugal 😱 pic.twitter.com/CjW4gNs3vS

Portugal hung on for the 3-2 win, though. They next play Uruguay Monday, while Ghana will face South Korea that day. Those two sides drew 0-0 Thursday.