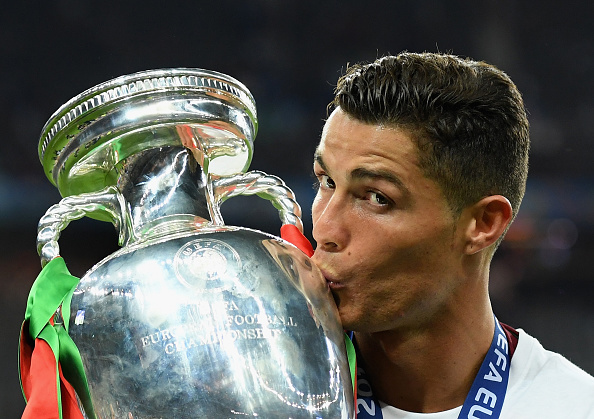 Cristiano Ronaldo barely played any part in it. Well, not in the final anyway. But he’s a European champion now, after Portugal lifted Euro 2016 in spite of the injury the four-time world player of the year picked up in the eighth minute, which forced him off over a quarter of an hour later.

Still, it counts. He’s won a major international title for his country. And that was missing from his resume. He’d already won the Champions League three times, the Premier League three times, and La Liga once. Not to mention picked up more individual prizes — on top of that quartet of Ballon d’Or trophies — than we can conscionably bother you with. But to many, Ronaldo couldn’t enter the conversation for the greatest player of all time until he’d won something with Portugal.

No matter that he’d scored an absurd 260 league goals for one of the world’s biggest clubs in just 236 games. That he’d battered Real’s all-time league scoring record in a mere seven seasons, when it had taken Raul 16 seasons to set it. That his scoring ratio is an astonishing 1.05 per game for Real — whereas Raul’s was 0.44. That he reinvented the winger position and then, when he entered his 30s, refashioned himself as one of the world’s best strikers.

Until he won something with Portugal, it didn’t count. Or so some argued.

It’s the same line of reasoning that is employed to make the preposterous argument that Lionel Messi isn’t already the greatest player of all time. He hasn’t won with Argentina, they say, even though he’s taken his nation to three Copa America finals and a World Cup final, all of which he lost — three of them in extra time or on penalties. He’s been unlucky not to win.

Regardless, the logic of requisite international glory to enter the G.O.A.T. discussion doesn’t really hold up. Certainly, soccer is a team sport and winning with your team is a crucial aspect of validating the individual’s transcendence. But winning at the club level — as Ronaldo and Messi have again and again and again — is actually more meaningful than raising trophies with your country.

Sure, lifting a World Cup is really, really hard. And so is claiming the Euro or Copa. That’s mostly because they don’t come around very often. But even more so because you have very little control, if any at all, over which country you represent. And that’s what also makes it an unfair benchmark. If you’re a superstar who has the poor fortune of hailing from a country without a serviceable supporting cast to complement you, that’s not really on you. You can make your country better, but still might not win the World Cup. There’s only so much you can do, no matter how good you are. Clubs can go out and find the pieces needed to fill out the puzzle around you. National teams can’t.

So now Ronaldo has his major title in spite of those challenges and his resume is considered complete. But he had less to do with his team reaching the final than Messi did with his surging to the Copa America Centenario title game two weeks prior. Ronaldo had a solid tournament by his standards — a very good one by anybody else’s. But he missed most of the final. Messi pulled the strings as the Albiceleste went to a major tournament final for a third straight summer. And then they lost on penalties, a total lottery.

Does this mean that Ronaldo now has a qualification that Messi is missing? That he’s ticked the arbitrary box Pele and Diego Maradona — the other pretenders to the nebulous and ultimately sort of pointless all-time title — also checked off? That because Eder’s long shot bounced past Hugo Lloris in extra time, even though Portugal was largely outplayed by France, Ronaldo had the better career? The deeper you delve into this reasoning, the shoddier it gets.

Ronaldo was one of the greatest players of all time, regardless of whether he won a major title with Portugal or not. Just as Messi is even if he doesn’t get to a fifth final with Argentina and finally wins that one. (Chances are he won’t, since he announced, at 29, his retirement from his national team following June’s Copa.) Just because Pele and Maradona did it doesn’t mean Messi has to — even though Ronaldo now has.

What Messi and Ronaldo have done for their clubs, twice a week, year after year, should speak far louder than what they’ve accomplished — or failed to — with their nations at a quadrennial tournament, even if it is the most prestigious trophy in the game. Consider that Maradona’s prime at the club level was relatively brief, thanks to his hedonistic lifestyle. And that Pele never left the Western Hemisphere to play his club soccer, never testing himself in Europe, where the best clubs were even before the Brazilian league’s long decay began.

You could just as easily argue that without a UEFA Champions League title (or its European Cup predecessor), you can’t be the best of all time. Ronaldo did it three times; Messi four. Pele and Maradona never won the Champions League.

It’s a point just as flimsy as the requisite that you win a World Cup, Euro or Copa America.