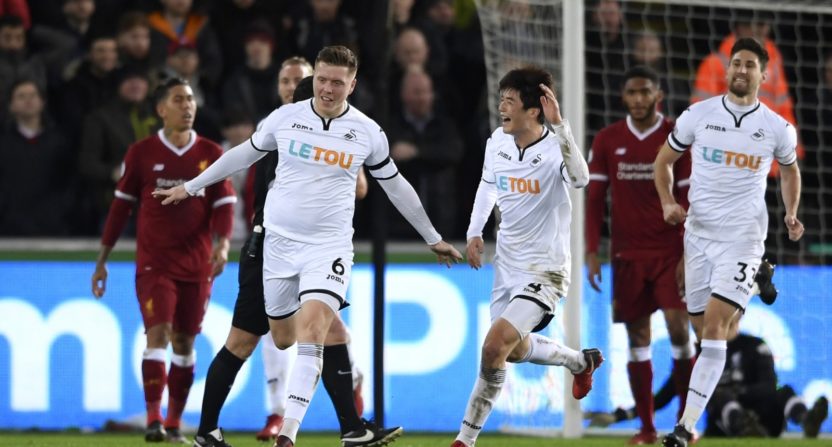 While Manchester City has seemingly wrapped up the title in November, something dramatic was starting to form elsewhere in the Premier League. There may never be a relegation battle more dramatic, wild and wide open than the one that is shaping up with 14 games left to go in the campaign.

Consider how there is only eight points between Everton in ninth and Swansea at 20th in the Premier League and eight of those clubs have already sacked a manager at this point of the season. The margins are impossibly tight, thanks to increased TV revenue and new ownership. With the stakes so high, that has created a massive race to avoid the trap door in the Premier League, the likes of which have not ever been seen.

Behind the top six, there usually is a healthy range of teams that are safe from relegation, but aren’t really much more than that. Outside of Leicester and Burnley, there is no midtable this year. Everton might be the only club close to that, but they’ve already sacked a manager after a wretched run of form and a spending spree that would make Europe’s big boys blush.

And part of this has to do with usually stable clubs like Southampton, Swansea, West Brom and Stoke seeing their form crater either due to stale managers or the team not being able to replace sold-off stars the way they used to in the past. Since there is no midtable anymore, the bottom of the league is as lopsided as ever, and catching up on some of the most stable clubs in its grasp.

Combine this with promoted clubs Huddersfield Town, Brighton and Newcastle finding better form than many expected, and there’s now a scramble in a league that has maintained a pretty decent level of stability in recent years. Yes, perennial underachievers like Aston Villa and Sunderland are now gone, but older yo-yo clubs like West Brom and Stoke are in trouble, and teams that seemingly entrenched themselves in the league like Southampton and Swansea have found the going ever tougher as the transition on the pitch, in the dugout and the boardroom gets too much for even them to fight through.

While these clubs have made desperate moves for a new manager, and in many cases going through Premier League retreads like Sam Allardyce, David Moyes, Alan Pardew and Roy Hodgson, there haven’t been many big splashes in the transfer market at the bottom end of the league.

Normally, one or two clubs would try something audacious at this stage, and as the January window shuts, those moves haven’t come yet. With the margins so tight, one prolonged new manager bump or transfer splash might save a club’s season, in addition to crazy results like Swansea’s upset win over Liverpool.

No one behind Burnley can really feel same that they are in the Premier League next season, as teams like Swansea, Saints and others still show the ability to take points of the big boys on any given day. With many of the new managers having hit the ground running, like Carvahal at Swansea, Hodgson at Palace and Moyes at West Ham, any slip up could mean disaster for everyone else.

Obviously, as the calendar drags on, the picture will sort itself out in and the gap between ninth and the bottom will not stay at eight points forever. But there could be an ever exciting relegation battle going on, the likes of which hasn’t been seen.

While many of us weep that there’s no great title race this season, take solace that the scrap to stay in the league might be the most contentious, intense and wild one yet. And that has to be worth something in a league where there isn’t a title race, right?