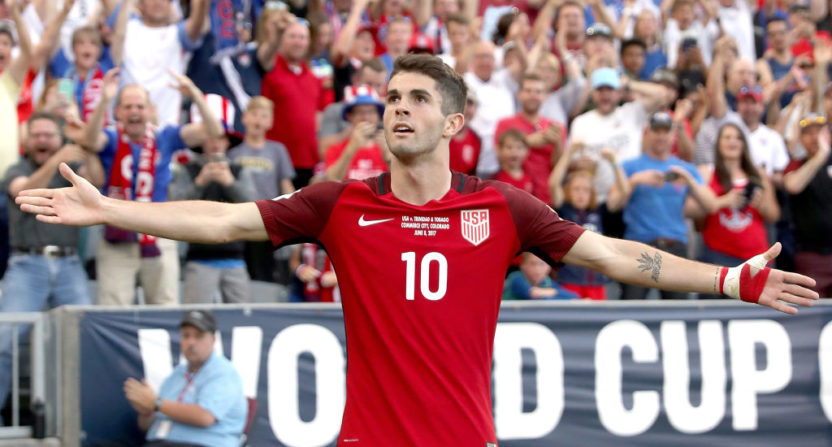 The U.S. Men’s national team were desperate for three points on Thursday in their World Cup qualifier at home against Trinidad and Tobago. And like that 6-0 win against Honduras six months ago, the USMNT went out and did what they had to do. The final was 2-0 in favor of the U.S. in Commerce City, Colorado.

It wasn’t nearly as convincing as their demolition of Honduras, and the result was far from certain after the first half, but it was three points nonetheless, and it was an absolutely necessary three points. Depending on other results tonight, it moved the U.S. into third in the Hexagonal — good for an automatic qualification spot — and it affords them some leeway for their game on Sunday at the Estadio Azteca in Mexico City, which is more likely than not to end in a loss.

More than anything else, it was the Christian Pulisic show in Colorado. The 18-year old Hershey, PA prodigy scored twice and often was playing by himself in attack that looked stagnant for stretches. His first goal — a tap-in that came from clever movement in the box, a perfect delivery from DeAndre Yedlin, and some good work build-up work from Darlington Nagbe — was a major breakthrough for the U.S., who struggled to find the correct spacing that would break down a compact T&T side.

"The legend continues!" Pulisic breaks the deadlock with his 6th #USMNT goal after great work from Nagbe. #USAvTRI https://t.co/00LKULYmuf

Pulisic, Clint Dempsey, Fabian Johnson, and Jozy Altidore seemed to have trouble negotiating the space in front of T&T’s deep-sitting backline, as they often took up each other’s spaces and slowed down an attack that already seemed to lack urgency. In the second half, Bruce Arena told the forwards to stay higher and start running vertically more, and it resulted in more space for Pulisic and Nagbe. In the 52nd minute, the first Pulisic goal validated those tactical changes.

That first goal opened the game up and forced Trinidad and Tobago to at least somewhat come out of their shell, which wasn’t completely “park-the-bus” but rather “make the game as choppy as possible.” Immediately after Pulisic’s score, the Soca Warriors charged back up the field and tapped the ball past Tim Howard, only to be ruled offside by inches. It was the closest they would come to equalizing despite a series of corners and final third possession spells.

In the 62nd minute, Altidore put on a striker’s masterclass in hold-up play and Pulisic whacked his pass past Trinidadian goalkeeper Jan-Michael Williams to make the score 2-0 and basically assure three points for the USMNT, who had pulled an angry Dempsey just a minute before and later pulled Fabian Johnson in favor of a more defensive-focused midfielder. At that point, they coasted to the finish without too many blips, securing an all-too-necessary three points.

Arena did what many fans and pundits expected him to, playing a 4-1-3-2 with Michael Bradley essentially playing as a lone d-mid behind a line of Nagbe, Pulisic, and Johnson. Dempsey and Altidore were the strikers — Bobby Wood came off the bench — and a fairly standard backline of Jorge Villafana, John Brooks, Geoff Cameron, and DeAndre Yedlin. Leaving Bradley without coverage was problematic at times in the first half, as the Soca Warriors ran laterally to get around Bradley and try to beat Brooks, who had another tough game.

The U.S. travel to Estadio Azteca in Mexico to face El Tri on Sunday. Christian Pulisic is surely confident despite this being his first time in the Azteca:

The USMNT need the confidence, because they’ve never won a competitive match there. Given Pulisic’s recent performances, we have to ask, why not?