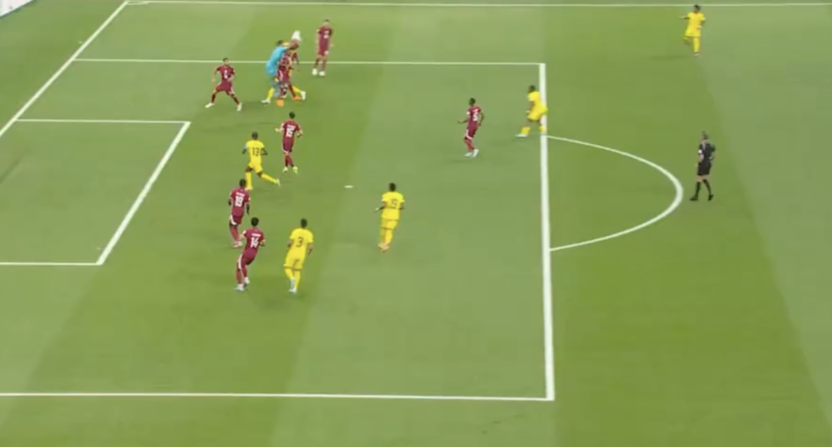 It took less than three minutes of gameplay for on-pitch controversy at the 2022 FIFA World Cup in Qatar.

Renato Ibarra appeared to score the opening goal for Ecuador against host Qatar without any obvious sign that a player was offside. Then the “VAR check” banner showed on the FOX broadcast.

The goal was ruled offside because an Ecuador player had his leg in front of Qatar goalkeeper Saad Al Sheeb as the keeper came off his line to punch the incoming ball.

"It's a very strange offside decision, but one that happens when the goalkeeper comes off the line like that."@DrJoeMachnik breaks down the VAR decision: pic.twitter.com/hpEhyI7YNa

This is how close the offside ruling was against Ecuador 👀 pic.twitter.com/ALzB6sDZiq

For those who understand the offside rule as a player not being allowed to be in front of a defender when the pass is made, there was immediate confusion. Valencia was well in front of at least one Qatari defender, as was Ibarra when he scored. Valencia was also onside on the cross into the box.

ESPN’s Dale Johnson had an astute analysis that explained the call. But it didn’t necessarily satisfy everyone. FOX’s rules expert Joe Machnik and studio analyst Alexi Lalas were even confused initially. One Twitter user used the moment to mock FIFA President Gianni Infantino’s inflammatory remarks before the World Cup began.

This is what happened with the disallowed goal. The ball came off Felix Torres, who was challenging the keeper.

It fell to Michael Estrada, whose foot you can see in an offside position. He headed the ball back to Torres.

It's confusing and hard to see, but it's offside…if you consider the aerial challenge won off the set piece a pass. #QATvECU https://t.co/azwoVOkxkC

The new offside technology is joyless and stupid and it’s fine if something like this goes uncalled pic.twitter.com/mxwf3w6BHd

This was also the debut of the new semi-automatic replay technology that will be used throughout the World Cup. One can only expect this won’t be the last time this particular implementation of VAR technology will be a storyline.

The outcome of that play mattered little in the first half. Ecuador completely outplayed Qatar and took a 2-0 lead into the break behind two goals for Valencia. But at the time, the jokes about Qatar, bribery and bad officiating wrote themselves.