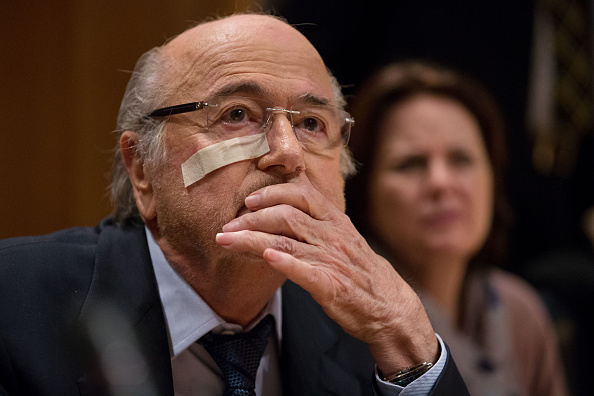 The 2022 World Cup in Qatar has faced intense scrutiny since the second the bid was announced as the winner by FIFA. Countries and soccer fans accused them of bribing FIFA members for votes and now the country is being accused of violating major human rights laws in order to build the stadiums.

However, despite Qatar being the country arguably most deserving of the unwanted attention, the tiny nation is trying to throw some shade at the United States. Not only that, they’re dragging former FIFA President Sepp Blatter, who’s also been accused of major violations, into the mess.

According to Yahoo! and the AP, the head of Qatar’s 2022 Organizing Committee said Thursday Blatter’s support for the United States’ 2022 bid should be investigated and scrutinized.

”Blatter wanted the U.S. to win – it’s just fascinating that nobody is raising any concerns about that and looking into that one to start off with,” Qatar Organizing Committee Secretary General Hassan Al-Thawadi said. ”But fair enough. I guess we will take the flak again.”

What’s confusing is where Al-Thawadi’s claims are coming from.

He claims that Blatter had “little regard” for leading the bid inspectors assessments before the vote for the 2022 World Cup.

Blatter was forced out of office last year and he claims it is mostly due to the United States, which is partially true due to the FBI’s involvement.

In the time since he was forced out, Blatter has spoken out a lot about the voting for the 2018 and 2022 World Cups, arguably the most disputed and controversial votes in tournament history.

Blatter claimed there was a “gentlemen’s agreement” amongst voters and the FIFA hierarchy that Russia would host in 2018 and the United States in 2022. Russia won the 2018 World Cup hosting rights handedly with 13 votes compared to Spain/Portugal’s 7 and the Netherlands/Belgium’s 2. The United States wasn’t as fortunate, losing the 2022 World Cup 14-8 to Qatar.

Since the vote, the United States hasn’t been accused of any wrongdoing while Qatar has since the second it won.

Other than the voting allegations Qatar has faced, the human rights violations and building costs are now the focus of scrutiny for Qatar’s World Cup.

Al-Thawadi told reporters the stadiums should cost between $8 and $10 billion while nearly $200 billion is being spent on infrastructure as a whole for the tournament.

However, it’s the human rights violations and working practices that have been in the news even more. Yahoo! reported some details contained in a recent report by Amnesty International:

“Implicated a World Cup stadium site in Qatar where migrant workers were said to have faced abuse that in some cases amounted to forced labor.”

Al-Thawadi claims the country and the organizing committee haven’t taken the issue lightly and are working to improve it.

”Monitoring enforcement mechanisms are being strengthened on a continuous basis, labor inspector numbers are being increased, site inspections are being increased, and scrutiny of recruitment agencies has been increased,” Al-Thawadi said. ”However change will not happen overnight and there are many issues on this matter that require further action, and more can be done.”

Whether Qatar does make changes remains to be seen. Time will also tell if the United States goes under investigation along with Sepp Blatter for his alleged involvement in their bid.