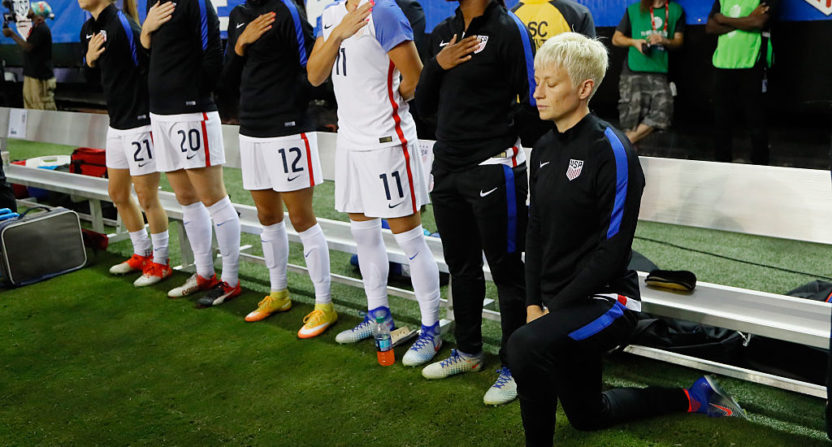 Sunday nights NWSL contest between Seattle Reign FC and FC Kansas City saw a few missing players for the pregame lineup for the national anthem. As what has been going on this weekend in the wake of President Donald Trump’s comments, five NWSL players decided to stay in their respective locker rooms until the anthem was finished.

Three of the five players are regular faces to the US Women’s National Team. Defender and captain Becky Sauerbrunn and forward Sydney Leroux of FC Kansas City stayed in their locker room as well as Seattle midfielder Megan Rapinoe. KC players Yael Averbuch, who has played for the USWNT for six years as well as Canadian NT player Desiree Scott also remained in the locker room.

A little over a year ago, while representing the United States, Rapinoe became the first white person to kneel for the national anthem, while Colin Kaepernick was kneeling. At that time, the USWNT was in a labor disagreement with US Soccer which some felt as the women’s CBA was not equal to the men’s CBA despite the women winning a World Cup. And in addition to being gay, Rapinoe saw the inequality she felt and joined in. While Rapinoe wasn’t punished by US Soccer, they did pass a rule requiring players to stand for the national anthem during games where they represent the national team.

While US Soccer never actually explained what the punishment would be if someone didn’t stand for the national anthem, I have to imagine they have to be carefully crafting their words here. This isn’t a USWNT game so US Soccer has no jurisdiction to punish anyone but they are surely going to be asked about this since three of their more notable and best players remained in the locker room.