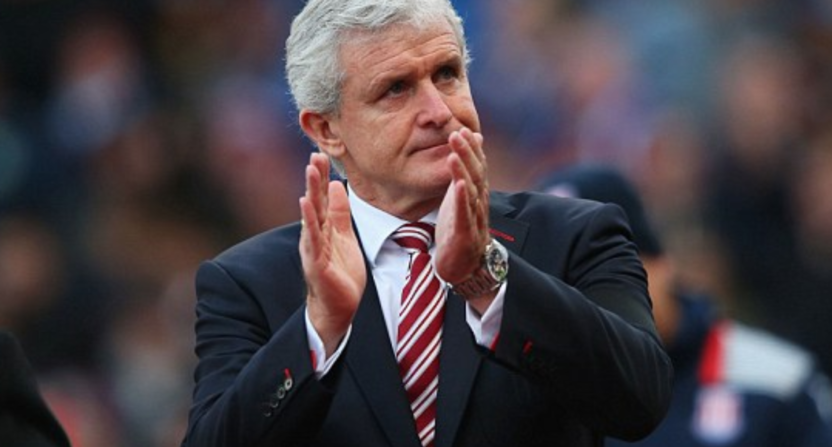 Last week, Mark Hughes was named as the new manager of Southampton Football Club. To anyone but the most ardent of soccer fans, the news was probably a small blip on your radar. Southampton are clinging to life in the Premier League where they’ve enjoyed moderate success the last few years and currently sit in the relegation zone at 18th.

What is remarkable about the situation is that in naming Hughes as manager in hopes of rescuing their EPL status, Southampton have hired someone who was just fired by Stoke City only two months ago back in January. Stoke sit one spot below Southampton in 19th in the Premier League.

Hughes is one of a few managers currently in the Premier League that clubs keep coming back to time and time again. Here’s a more detailed look at the merry-go-round of mediocrity.

Let’s start with Hughes, who has the distinction of being the first manager of Manchester City when they became a member of European football’s super rich thanks to massive investments from the middle east in 2008. Unfortunately for Hughes, he brought in the likes of Gareth Barry and Emannuel Adebayor instead of Kevin de Bruyne and Sergio Aguero.

Hughes bounced from City to Fulham, where he lasted 11 months. Then he went to QPR where he lasted less than a year once again. That was followed by what by comparison is an insanely long run at Stoke City where the club has been able to comfortably avoid relegation over four plus seasons. That came to an end in January when Hughes was fired and he joined another relegation battle in Southampton.

Who replaced Hughes at Stoke this January? Paul Lambert, who himself had previously managed Norwich to promotion back in 2011. A year later he moved to Aston Villa where he lasted for two-plus seasons. Following spells in the Championship with Blackburn and Wolves, Lambert returned to the Premier League with Stoke. Incredibly, it’s the fifth different team he’s managed in six seasons.

Hodgson is most well-known in his managerial career for two things: his disastrous run at Liverpool in the fall of 2010 and his equally disappointing stint as manager of the English national team. At Liverpool, Hodgson led the great club all the way to the relegation zone. At England, he led the team to a World Cup group stage exit and a Euro 2016 defeat to Iceland.

His reward? A welcome back to the Premier League with Crystal Palace after they had scored no goals in their first four games of the season. At least he has them up to 16th in the table.

A little over a year ago, Palace fired the next manager on our list: Alan Pardew, who may be the poster child for this phenomenon. Pardew first made his name as a manager when he led West Ham back to the Premier League in the mid-2000s and took Liverpool to penalties in the classic 2006 FA Cup Final. He was able to find some success at Newcastle, leading them back to 5th in the EPL in 2012, their best finish in eight years. However, it was short-lived as he was gone by the end of 2014. Then it was on to Palace for Pardew until being let go with the team near the relegation zone in 2016.

Speaking of relegation, David Moyes achieved the feat last year as Sunderland went down to the Championship for the first time in 10 years. His reward? Another Premier League gig, this time with West Ham United. To let you know how well that’s been going, fans stormed the pitch last week in protest of the direction of the team with one even taking the corner flag and planting it at midfield.

It’s hard to find a coach or manager whose stock has fallen further in the last decade. Moyes’ latest managerial stints have been so bad that it makes his short time at Manchester United look like, well, Sir Alex Ferguson.

No list of Premier League managers would be complete without Sam Allardyce, who has managed an absurd seven different EPL teams. Allardyce took Bolton to the Premier League in 2001 and had an eight-year stint at the club, managing the team for 371 games. Since then, he has taken the reins of six different clubs. After his time at Bolton, Allardyce spent just 24 games leading Newcastle, then 90 at Blackburn, 181 at West Ham, 31 at Sunderland, 24 at Palace, and now 19 games at Everton.

Over the years, Allardyce earned a reputation as something of an escape artist, being able to lead relegation-threatened teams to safety. When Everton signed him in November, they were a shocking 17th in the standings and he’s led them up to ninth. In spite of all of those numbers, though, the one that might stick with Allardyce the most is one: the single game he was in charge of the English national team before an undercover investigation busted him discussing illicit payments for players.

If you’re keeping track at home, that’s an astounding 30 different managerial tenures in the Premier League split among just six managers. And this list doesn’t even include people like Tony Pulis (three teams), Neil Warnock (three teams), or Steve Bruce (four teams) who are currently plying their trade in the championship.

Part of it is just the nature of English football. Many of these teams experience promotion and relegation between the Premier League and Championship on a continual basis, sometimes going back and forth in consecutive seasons. That yo-yo atmosphere has to create a stressful situation and the year-to-year nature of what league you’re playing in (and the massive amounts of dollars at stake in staying in the Premier League) create a situation where it’s almost intuitive to pull the trigger on a managerial change to create some sort of spark.

And when you do that at a club who’s in a relegation scrap, who else do you bring in but… someone who has a lot of experience in relegation scraps. Ideally, you would love to see new faces and new ideas come into the game and at some point, these managers are going to run out of teams to manage.

The game of musical chairs in the bottom half of the Premier League is unlike anything else in sports. Crystal Palace alone has had 16 — yes, SIXTEEN — different people manage games in just the 2010s alone. By comparison, West Brom are beacons of stability with just 11. Maybe Arsenal don’t have it so bad in keeping Arsene Wenger all these years.