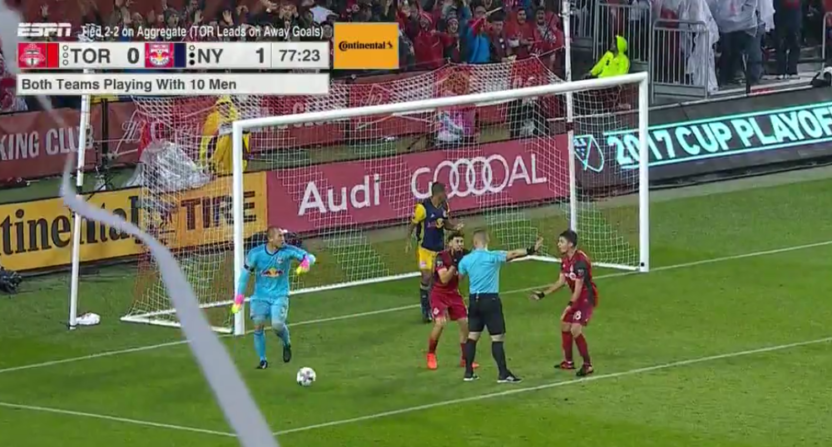 Sunday’s MLS Eastern Conference semifinal second leg between the New York Red Bulls and Toronto FC produced an incredible amount of drama and controversy, including further fights, and Toronto striker Jozy Altidore was at the center of much of it. Altidore played for the Red Bulls from 2006-08, and was involved in a first-leg incident where he said a Red Bulls fan said he didn’t deserve to be in the country (Altidore was born in the U.S.) because he didn’t put his hand over the heart or salute the flag during the national anthem, something that’s against Altidore’s religious beliefs as a Jehovah’s Witness. (Altidore and teammate Michael Bradley also got booed for their part in the U.S. missing the World Cup, which was more reasonable, and he said he was fine with that kind of criticism.)

On Sunday, things started with Altidore getting into a confrontation with Red Bulls’ midfielder Sacha Kljestan (also a U.S. national team teammate), then taking an apparent dive and looking for a card:

It appears Jozy Altidore slipped on a banana peel. How'd that get there? #TORvNY #MLSCupPlayoffs pic.twitter.com/7c2IslHBD8

Both players earned yellow cards as a result. This led to some on-broadcast criticism for Altidore:

The ESPN broadcast team is ripping Altidore apart. "It's his birthday tomorrow. … But 28 is obviously not for him an age of maturity." Ow.

And at halftime, Altidore and Kljestan reportedly got into a confrontation in the tunnel, and both drew second yellow cards and were ejected:

Kljestan and altidore actually scrapped in the tunnel. US international teammates and over an MLS playoff tie you throw that away.

Things only got weirder from there, particularly with a Toronto goal that players started celebrating before it was called back for a questionable foul against TFC midfielder Jonathan Osorio:

The match stayed chippy throughout, with plenty of fouls and appeals for fouls, including one from star TFC striker Sebastian Giovinco that drew him a yellow card. That was his second of the playoffs and will disqualify him for the next round. A later foul on Giovinco did earn a free kick, and that led to this remarkable bit of commentary from ESPN play-by-play announcer Jon Champion:

“I’ve traveled around the world and watched a lot of football, and I’d have to go back a long time in my aging memory banks to think of a game with more petulance in it than this one.” That’s not something you hear every day. And things continued to be strange from there, with more pushing and shoving and a further controversy over another disallowed Toronto goal, this one off a free kick that was taken before the referee signaled he was ready:

That was a less-controversial call than the first one, but still could have created drama if the Red Bulls had scored again to win the series. Instead, Toronto hung on to only lose 1-0, advancing on away goals thanks to their 2-1 road win in the first leg. But they will be without Giovinco and Altidore to start the conference finals thanks to suspension, so they didn’t escape this one unscathed. And it definitely did have a remarkable amount of petulance in it.