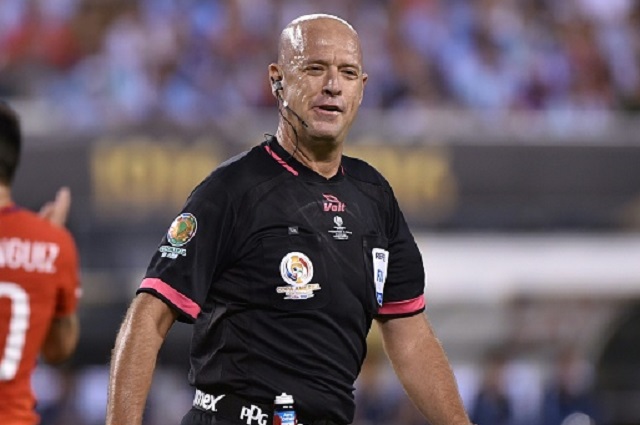 At kickoff, Lionel Messi and Gonzalo Higuain stood on one side of the field. Alexis Sanchez and Arturo Vidal on the other. Some of the brightest stars in the sport. Going up against each other for one of the biggest trophies in the sport. Yet in Sunday’s Copa America Centenario final, a rematch of last year’s championship game of all of South America, it was a little-known Brazilian who stole the show.

Or, depending on your vantage point, ruined the show.

Referees are supposed to guide the game along, to ensure that it unfolds peaceably and fairly. Referees have had a good game when you’ve barely noticed them and a great one when you didn’t even realize there was one on the field. But Heber Lopes was the most visible man out there on Sunday.

In a game that produced no goals until the shootout that would, cruelly, make Chile the champions at Argentina’s expense for a second summer in a row – after they beat La Albiceleste on penalty kicks following a scoreless game yet again – the referee hogged the highlights. And that, if it isn’t plainly obvious by now, is not a compliment.

By the time two hours of soccer had been played, Lopes had given out eight yellow cards and two reds, hampering a game that he let slip from his grasp early on when Sanchez was raked by an overzealous defender, which wasn’t called. And then the man in black tried to overcompensate with his ham-fisted attempts to impose order. The more draconian he got, the less credibility he retained.

The first red card, for Marcelo Diaz of Chile was defensible for twice blocking Messi from a promising run illegally. But the second, on Marcos Rojo, was rather questionable, given that he played the ball, even though it was from behind.

Now that Marcos Rojo has been dismissed I make that 6 red cards in Heber Lopes’ last 6 games. #CopaAmerica

Lopes was an odd choice to lead this final – a Brazilian for an Argentina game – given the seething and historic animosity between his own country and one of the ones on the soccer field. These sorts of potential conflicts of interest are usually avoided. Then there was the fact that he’s plainly a heavy-handed referee, selected for a final between teams of such stupendous skill that it would have served the game best to keep it in check but let the sides play.

Soon enough, he, rather than Alexis or Messi, became the talk of the game.

Ref passing out cards like a game of UNO

And indeed, Lopes seemed to be doing his best to gathered whatever attention there was to be had, in addition to making weird calls – like giving Messi, who never ever dives, a yellow for diving, when there had clearly been contact in the Chile box.

Lopes weirdly jerked his head as he whistled for half-time. He made great theater of everything, taking obvious delight in issuing cards, waving them like a salute to his own authority. He was a showman in a job that calls for the opposite.

Referee Heber Lopes gave out this card like he was really excited to give it, haha. #emphatic #ARGvCHI #CopaAmerica pic.twitter.com/q0ExYDD9g9

Messi accidentally tackled him in extra time, and Lopes actually pulled himself up by him, before stumbling off. And at one point, in the 112th minute, it looked like the Argentina players decided on their own that something was a foul and then took a quick free kick. Chile didn’t object. The ref just raised his arms in wonder at all this as play carried on.

Deep in extra time, clearly feeling that he hadn’t played a large enough role yet, he excoriated Gary Medel like a petulant child.

These were strange scenes. And a case study in how badly things can go wrong when the man in the middle isn’t up to the job. We don’t know what kind of game we could have had if it had been refereed properly. If Lopes had whistled fouls early on, rather than ignoring obvious infractions, letting things get out of hand, and then suddenly waving yellow and red cards about.

We don’t know if this final would have been quite such a regressive slog. Or if Argentina would still have lost. Or if Messi would have retired from the national team in despair over losing major finals in three straight summers – after also seeing Germany win the 2014 World Cup in extra time.

There’s no telling what this game might have been, because we never got the chance to find out. Lopes preempted that process.

And so Messi’s final game for Argentina – if he sticks to his word – was one in which he was upstaged by a referee.