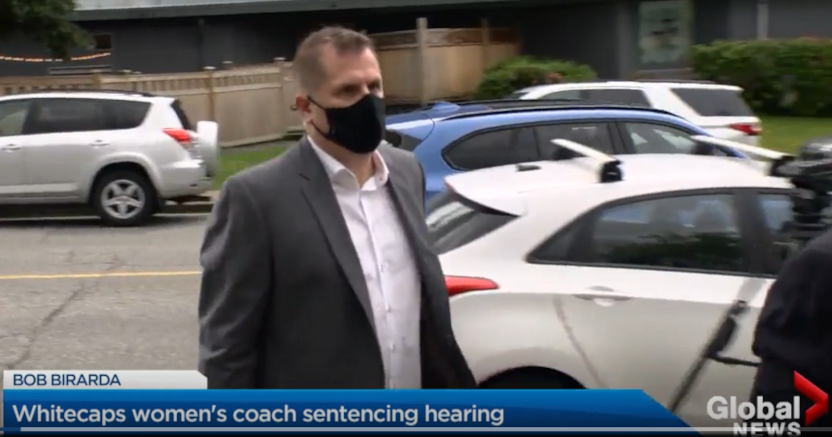 In February, Bob Birarda pled guilty to three counts of sexual assault and one count of sexual touching. He was facing 10 charges over incidents alleged to have occurred between Jan. 1, 1988, and March 25, 2008.The sentencing hearing for Birarda, a former head coach of the Canadian women’s U-20 soccer team and the Vancouver Whitecaps’ women’s team, is set to continue this fall. But the story doesn’t end there, and the wider discussion on the Canadian Soccer Association’s response to 2008 allegations against Birarda was enhanced by Thursday’s release of a 125-page independent report from McLaren Global Sports Solutions (which Canada Soccer commissioned after repeated pushes for that from their current women’s national team), which spotlighted a “failure to take accountability.” Here’s that, via CTV/TSN’s Rick Westhead:

New: In a 125-page report examining how Canada Soccer responded to allegations that 2008 Canada U20 head coach Bob Birarda was a predator, lawyer Richard McLaren concluded there has been "a failure to take accountability for what occurred in 2008." https://t.co/x6ZGSffLhs

There were various complaints raised against Birarda over the years. But there wasn’t a lot of public traction for those until a February 2019 blog post from former Canadian national team and Whitecaps’ player Ciara McCormack that outlined specific complaints of Birarda’s sexual texts to players, and how those texts were brought to the CSA and the Whitecaps in 2008. McCormack’s post then also detailed the lackluster response from those organizations in 2008 and since, including how they agreed to portray Birarda’s departure as “mutual,” which paved the way for him to keep coaching teenage girls for another decade. The report dives into that in depth, and has some strong words for the CSA and Whitecaps’ failings. Here are some key parts of that, from the “Summary of Institutional Failures” section beginning on page 60:

5. There was a lack of oversight of the Women’s U-20 WNT program and a “disconnect between the Association and Women’s team which operates relatively
independently as team [sic] being in Vancouver” according to the 2008 Road to Excellence Evaluation Report.

6. The CSA did not follow the procedures of their own Harassment Policy as it concerned the investigation, case management, and discipline of Bob Birarda.

…11. The Executive Committee failed to impose appropriate disciplinary sanctions on Birarda according to Article 11 of the Harassment Policy. Although the Executive Committee acted swiftly to provisionally suspend Birarda and voted to terminate him based on the Ombudswoman’s recommendations, they allowed him the opportunity to resign from his position without acknowledging his harassment. The lack of disciplinary sanctions allowed Birarda to eventually return to coaching youth soccer.

…15. The CSA press release that characterized Birarda’s departure as being in the mutual interest of both parties without so much as addressing the harassment was a gross mischaracterisation of the circumstances and failed the victims of the harassment, their teammates, and the organisation as a whole.

The report notes that there’s no record of the CSA and Whitecaps investigations in 2008 uncovering the sexual assault and sexual touching incidents that would eventually lead to Birarda’s guilty pleas on criminal charges this February. But that doesn’t absolve those investigations, whose failures (from limited discussions with players to limited protections promised for players to limited scope to lack of written reports) are discussed in detail in the report.

This also doesn’t absolve the CSA and the Whitecaps (who are still facing another, MLS-commissioned, investigation over their role in this) from how they quietly parted ways with Birarda. Their choice to do that let him keep coaching young players for another decade. We’ll never know exactly what a better investigation in 2008 might have produced, but the report is clear that the CSA and the Whitecaps failed then, not just by today’s standards, but by the own standards and practices they had in place at the time.

This comes at a significant time of reckoning for sports organizations’ roles in concealing sexual assault and harassment. In Canada alone, Hockey Canada officials are again facing a Parliamentary committee this week, and they revealed Wednesday that they’ve paid out $7.6 million in settlement claims over sexual assault and sexual abuse allegations since 1988 (with that figure not including an undisclosed settlement reached over 2018 World Juniors assault claims, and the organization’s response to that putting president Scott Smith under particular fire this week). More than 80 Canadian bobsleigh and skeleton athletes have also called for resignations over Bobsleigh Canada Skeleton’s handling of abuse claims. And in the U.S., similar demands for organizational change have arisen over handling of scandals from the North Carolina Courage and the NWSL, USA Gymnastics and Michigan State, Ohio State, the Chicago Blackhawks and the NHL, the Washington Commanders and the NFL, and more.

As for Birarda himself, his sentencing hearing will resume this fall. The Crown is asking for a sentence of  two years less a day of imprisonment, plus three years’ probation; the defence has not yet presented their sentencing request. But the larger impact still from this story may be if and how Canada Soccer changes to protect its athletes in the wake of this. The report notes that some positive changes to Canada Soccer policies and procedures have already been made, but it has plenty of recommendations for more. We’ll see where the organization goes from here.