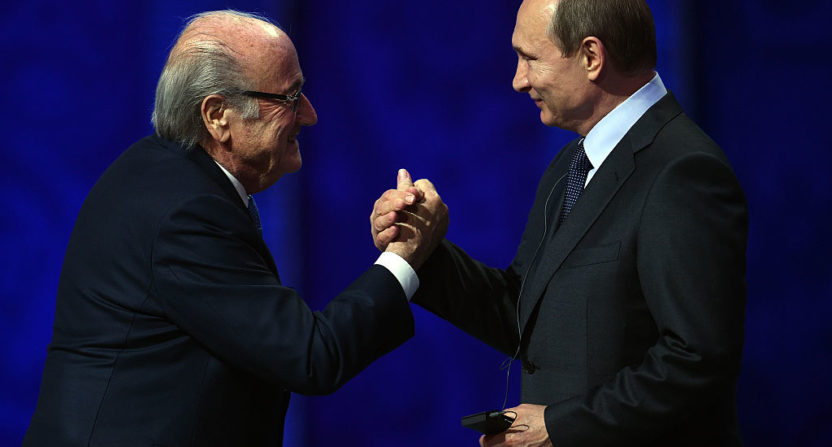 We’ve heard plenty about the myriad human rights abuses that have occurred in Qatar during construction for the 2022 World Cup, but there’s another World Cup to be held before we get to that inevitable disaster. Next summer, Russia will host, and according to a study by Human Rights Watch, there have been no shortage of tragedies related to the Russian preparation.

The New York Times sheds some light on the study:

At least 17 construction workers have died and many others have faced exploitation and labor abuses while building stadiums for the 2018 World Cup in Russia, according to a report by Human Rights Watch.

The report also said that FIFA, soccer’s corruption-plagued governing body, lacked transparency and had failed to demonstrate that its monitoring system had effectively identified, prevented and corrected stadium labor conditions.

That’s what happens when you award World Cups based on corrupt practices as opposed to genuine logistical studies, safety measures, and general common sense. The United States wasn’t bidding on the 2018 edition, but England was, and as the article mentions, they have a recent history of much safer construction practices, especially relative to Russa:

At least 70 workers died during construction for the 2014 Olympics in Sochi, Russia; 13 before the 2016 Olympics in Rio de Janeiro; six before the 2008 Olympics in Beijing; and zero during the building of the Olympic Park at the 2012 Olympics in London, according to trade union officials and news accounts.

We could have had consecutive World Cups in England and the United States, arguably the two nations (along with Germany, probably) best equipped to host a World Cup at a moment’s notice, much less when given half a decade or more to prepare. Instead, we get this, which is a literal tragedy; slave labor, deaths, and countless other abuses, all in the name of an event that should be guilt-free pleasure for just about the entire world.