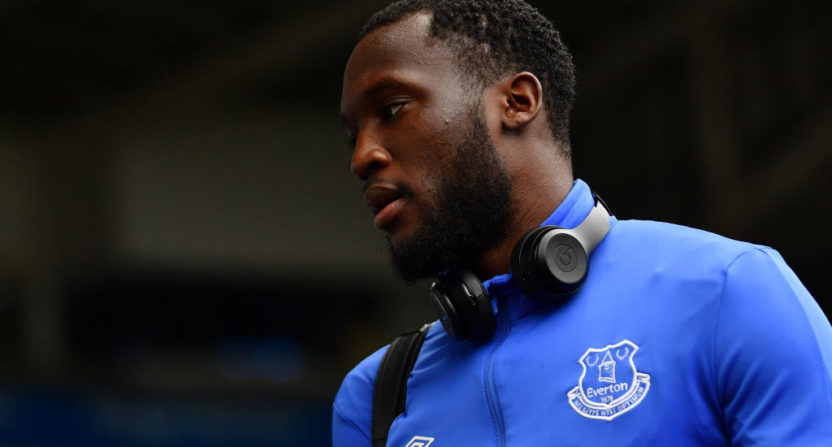 Despite rumors they were looking at signing striker Alvaro Morata to replace Zlatan Ibrahimovic, Manchester United instead went just down the road to Merseyside to work out a deal with Everton for Romelu Lukaku.

Multiple reports have that Manchester United and Everton agreed to a £75 million ($97,119,000) transfer fee to sign the highly sought out Everton striker. While there is a bit of doubt that it truly is a done deal, it seems like it’s a matter of time that Lukaku will trade Toffee blue for Red Devil red.

Assuming that Lukaku becomes Manchester United’s top striker, what does that make of those two entities. For Lukaku, he finally gets to ply his trade at a bigger club and an opportunity at playing in the UEFA Champions League as a regular starter. This had been a big reason why Lukaku wanted to leave Everton and he may finally get his wish.

For Manchester United, it’s undeniable that the addition of Lukaku will make them better. And for a Premier League that consists of six teams fighting for four Champions League spots, Lukaku will certainly help United’s chances of making the top four and not have to rely on winning the Europa League to qualify for Champions League.

But is that enough for Manchester United to make a run? Keep in mind, Lukaku is replacing Zlatan Ibrahimovic, who was having a remarkable season (28 goals in 46 appearances as a 35-year-old) before he tore his ACL at the end of the season. Lukaku, with 26 goals in 39 appearances, has a better scoring rate and is 24. So, he’s not only going to just get better over the next half-decade, along with fellow youngsters Anthony Martial and Marcus Rashford, could prove to be a formidable attack that just gets better and better for the foreseeable future.

But if fans think Lukaku alone is going to automatically send them into the top four, they may want to wait. United’s midfield still seems disjointed and need a new holding midfielder. And despite allowing a league low 29 goals, I’m still not confident about that backline. They were that successful because they play the classic Jose Mourinho defensive/counterattack style and have one of the best goalkeepers in the world in David de Gea, who stands on his head every game. Signing Victor Lindelof from Benfica is a great start but I would feel a lot better about them if they got one more top defender.

At the same time, if we know anything about Manchester United, it’s that they have a lot of money and they aren’t done signing players. The transfer window is still open for eight more weeks and there’s no doubt United is signing more players (and selling off some of the dead weight).

So having said that, it’s a bit nonsensical to predict where United finishes in the Premier League this early in the transfer window. We do know that at worst, Lukaku will at least keep up Zlatan’s goalscoring form. At best, he helps bridge the gap in goals compared to the top teams in England and United is back in the thick of the Premier League title hunt. And that should be a good sign for United fans to be confident on what is potentially to come in the upcoming weeks.