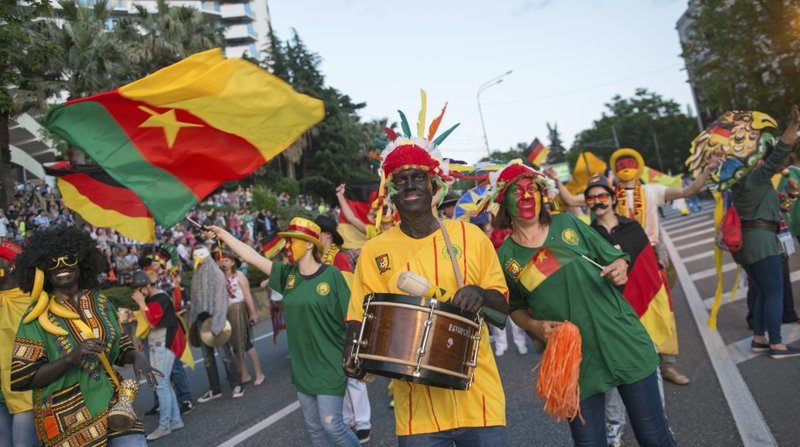 Russia will host the 2018 World Cup and the 2017 Confederations Cup, which matches the top team from each world confederation’s tournament.

In preparation for this summer’s Confederations Cup, the city of Sochi, which hosted the 2014 Winter Olympics, held a parade to celebrated the event. Included as a group representing Cameroon, which will be the African confederation’s representative.

However, the people in the parade weren’t from Cameroon. Instead, marchers worse blackface and other tried to portray other stereotypes.

A picture from AP told the story:

AP cited another reporter who went to the event and saw other racist outfits:

Lolade Adewuyi, a Nigerian journalist studying in Russia who witnessed the parade, told The Associated Press the people in blackface appeared as part of a section devoted to the June 17-July 2 Confederations Cup, a key test event for next year’s World Cup.

Adewuyi said the parade, which was led by Sochi’s mayor, also contained people wearing sombreros and fake moustaches to symbolize Mexico, another country which will play next month in the southern Russian city.

Russia has had a number of issues with human rights, sexism and racism that international sporting organizations haven’t felt the need to seriously address. The Olympics went on and the World Cup will too, despite homophobic laws and terror unleashed by the government.

It’s clear the country’s discrimination issues are still present, but it’s unlikely FIFA will do anything meaningful to punish the country.