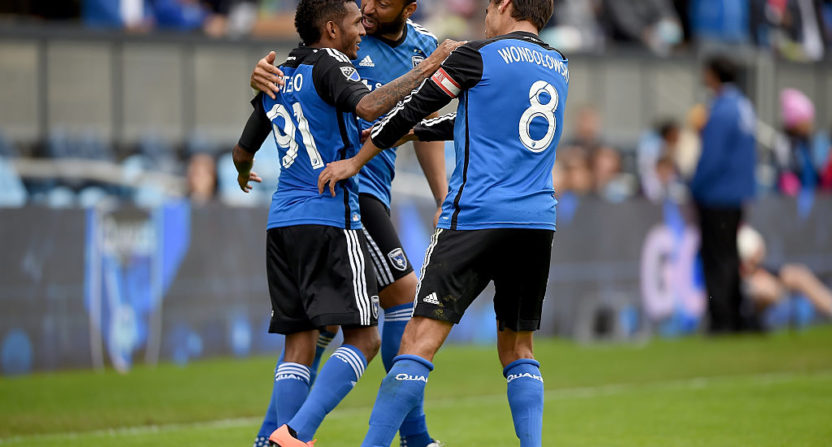 For years, Dominic Kinnear’s preferred formation was the classic 4-4-2 — a holding mid, a box-to-box mid, a No. 9, and some form of a second striker. San Jose became the place where attacking playmakers went to die, and for a time last season and arguably now, they’ve had the largest stockpile of defensive midfielders in MLS.

It makes sense, to an extent, on paper. Chris Wondolowski can not feasibly play as a lone No. 9, so he needs a striking partner with him to hold-up play and fulfill the duties of a classic center forward. Kinnear built his team around his best player, and Wondo responded with 28 goals in the former Dynamo manager’s first two seasons.

As the league evolved and became increasingly dependent on playmakers throughout the midfield, though, the Earthquakes have gone out of fashion. They missed the playoffs in 2015 and 2016, consistently losing at home and rarely seeing goals come from someone other than Wondo. It seemed as though they had become MLS’s forgotten team; overshadowed by their star-studded rivals to the north and south.

Not so anymore, at least for the moment. They seem to have caught the league’s attention with a 1-0 road win at Minnesota and then a 3-0 home beatdown of high-flying Western Conference contenders Portland, with Kinnear adjusting the formation to what is a hybrid 4-2-2-2/4-3-3 and, finally, allowing his players tactical flexibility. Here’s what it looked like in the win over Portland: 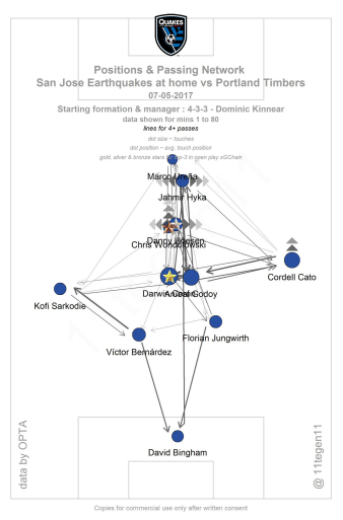 That’s incredibly narrow, and it relies a lot on full backs Kofi Sarkodie and Cordell Cato to fill space on the flanks. It’s also very free-flowing, though, and that map shows players’ average positions based on touches, not off-the-ball or defensive movement.

The base formation appears to be a 4-3-3 with Marco Urena up top, Chris Wondolowski and Danny Hoesen on either side of him, and Jahmir Hyka playing as an attacking midfielder. On the attack, it adjusts, as seen in the diagram above. Urena plays target forward, Hyka pushes far up the field and wrecks havoc around the attacking third, and Wondolowski drops deeper and centrally with Hoesen, essentially creating a constantly rotating front four.

Each of the front four has their own role in this, and the diversity of them is what helped the Quakes hang three on the Timbers. Urena is capable of being a channel-running No. 9, holding up play acting as a hub along the opponent’s backline. Hoesen drops deeper and takes the ball from the d-mids (Darwin Ceren and Anibal Godoy, who are huge in their own right), occasionally unleashing ferocious shots from outside the 18. Hyka is a renegade, playing like Houston’s Alex in that he wins the ball with dogged, speedy pressing and combines well in the final third. He is as close as San Jose is going to get to a No. 10, and right now, that’s fine.

Wondolowski’s role is where Kinnear has hit the jackpot. He is playing as what we’ll call an inverted Raumdeuter, which is by definition inverted anyway but, as seen above, Wondo takes it to the extreme.

Here’s how Football Manager defines the position, as transcribed by Squawka:

“His main role is to find pockets of space in which to operate. Essentially a wide poacher, the Raumdeuter takes up seemingly harmless positions out wide, waiting for the opportune moment to burst through the defensive line for that telling shot or cross.

“He is difficult for defenders to pick up as he will often drift from his assigned position looking for any opportunity to exploit. This can result in quiet periods during which the Raumdeuter may neglect his defensive duties, therefore adequate cover and a strong team shape are key in order to fully utilise his attacking prowess in the final third.”

When searching the position on Google, you automatically get a picture of Thomas Muller, the Bayern Munich and Germany goal-scorer who represents the most well-known of Raumdeuters.

Wondo and Kinnear’s interpretation is essentially the same as FM’s definition, although the Quakes do have Wondo playing a bit more inverted than is traditional. This is the perfect solution to the previous problem San Jose had, which was “we can’t play any formation other than a two-striker one because our best player wouldn’t fit!” Now, they can still give their goalscorer the freedom he needs to maneuver himself in the box while also generating chances from other places on the field.

We’ve only seen it twice, and it’s worth noting that Portland were missing two of their three best players last week, but it’s a clear improvement from the 4-4-2, which seemed to have had them stuck in mediocrity. As many clubs across MLS can attest, bold tactical adjustments can lead to flexibility and a look that other teams haven’t seen before. These are good things.

Whether it’s sustainable or not is yet to be seen. But at least it’s something different.