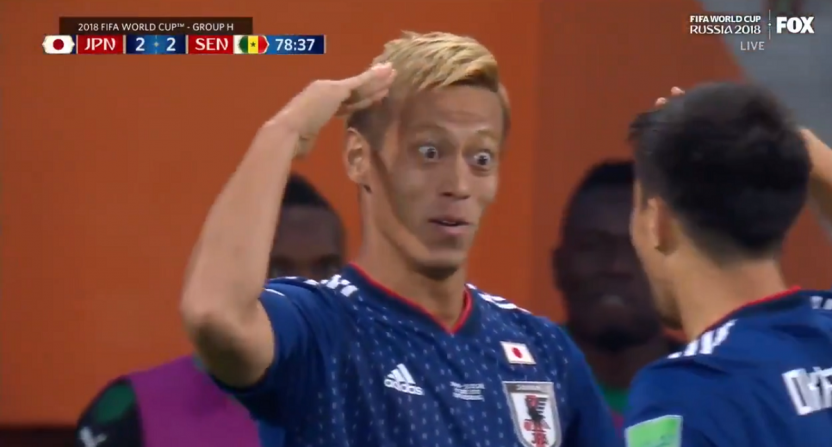 One of the best things about the World Cup are random games that turn into classics, aided by the stage provided by the world’s biggest sporting event.

Senegal and Japan proved that again today; both squads are good, but not expected to be contenders for a deep run, yet both had also won their opening matches, over Poland and Colombia, respectively. That meant that if either team pulled off the win today, they were likely through to the next round. Those stakes, combined with both teams being good enough to be entertaining while not good enough to guarantee a one-sided game, led to a very fun match.

You can watch the full match highlights here:

Japan came from behind twice against Senegal in an evenly matched game between the top teams in group H.

Catch all the highlights in our 90' in 90" ⬇️ pic.twitter.com/lqckWJdpHl

Or if you prefer, the goals; first, Sadio Mane opened things up for Senegal:

But Inui tied things up for Japan very shortly after:

Inui equalizes for Japan on a perfectly placed shot into the side netting! pic.twitter.com/SPLRdRykT5

Then 19-year-old Moussa Wague lasered a side-footed shot for the 2-1 lead:

This time Honda finds himself alone in front of net and tucks it away to make it 2-2 with 10 minutes left. pic.twitter.com/cAYpAcJeF8

It was a nail-biter throughout, and considering most pre-tournament projections had one or both of these teams going out in the group stage, they have to both be very pleased with where they stand heading into the final group stage match. (Especially Japan, who have the less-intimidating Poland remaining, while Senegal has to deal with Colombia.)

But matches like this make the World Cup what it is. Hopefully the impending 48-team version retains some of that magic.