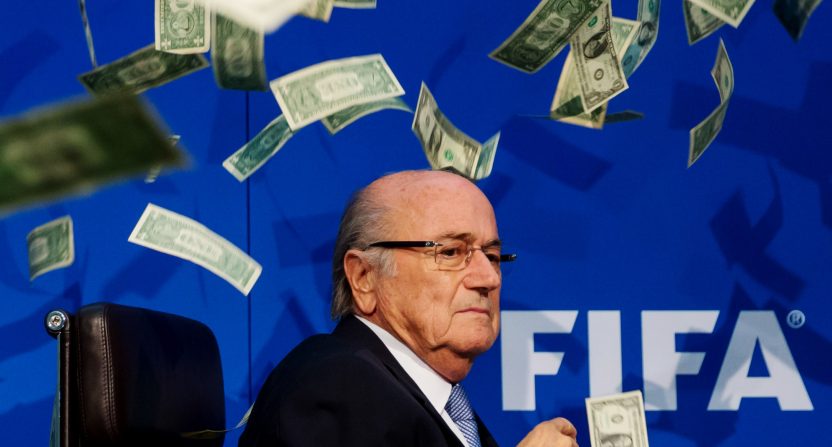 Try not to act surprised, but Sepp Blatter was corrupt when he was FIFA President. Just when it seemed that we knew all of Blatter’s reign of corruption, we learned something new about him that may have had to do with Russia and Qatar winning hosting rights to the 2018 and 2022 World Cups.

The Court of Arbitration for Sport revealed its 68 page verdict of Sepp Blatter’s appeal of a six year ban from world soccer for an illegal payment to former UEFA President and Secretary General Michel Platini. Platini was banned four years. In this, the report revealed the usual things that Blatter had done that we all knew that got Blatter banned six years, but it was also revealed that FIFA’s Finance Committee approved an annual $200,000 bonus to each Executive Committee member two days before the vote for the 2018 and 2022 World Cup rights were supposed to take place.

This timeline is important because the 22-person Executive Committee were the ones who were voting for host and they all got bonuses a couple days before the vote. That may seem unrelated but then Platini admitted years ago that he met with fellow corrupt soccer exec Mohamed Bin Hammam that same week and supposedly was the catalyst in getting enough ExCo members to vote Qatar (Bin Hammam’s home country) instead of the United States.

I’m not saying the bonuses were a direct result from Qatar paying for the World Cup but the timing makes way too much sense, and given it’s FIFA, that it should be questioned.

The CAS also took issue to an unusual method Blatter did to get his second in command more money. Blatter backdated Platini’s pension by four years that allowed Platini to make millions more.

At this point, we all know that just about everyone within FIFA at that time was corrupt or at least guilty by association if they didn’t do anything. And that the Russian and Qatar bids weren’t above board as well. The World Cup isn’t leaving either place and Blatter and Platini are not likely coming back to soccer, but that doesn’t mean FIFA has fixed all its problems and the investigations should stop.

The FIFA scandal is still going on and U.S. and Swiss officials keep gathering evidence on those still involved in the game. It’s a long process but they are still hard at work hopefully making the game better for all.