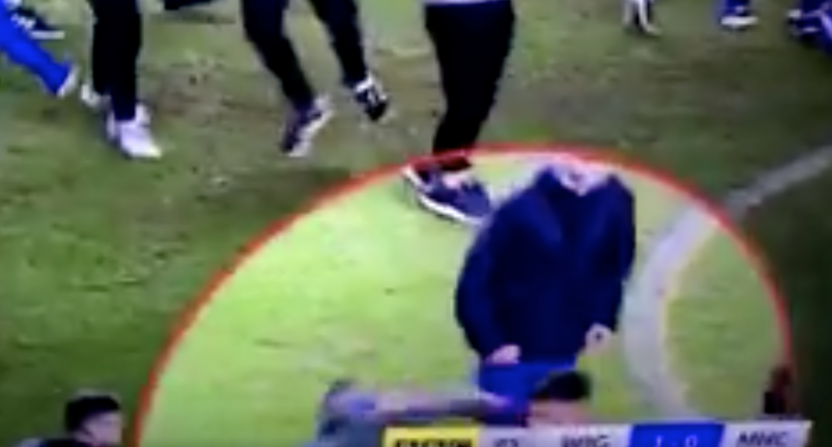 On Monday, Manchester City lost 1-0 to Wigan in the FA Cup Round of 16 despite dominating throughout. A controversial red card on Fabian Delph put City down to 10 and Will Grigg scored on Wigan’s lone goal.

Afterward, Wigan fans rushed the pitch to celebrate and things got testy. TV cameras caught Man City striker Sergio Aguero take a swing at the fan. In an FA investigation, Aguero said he was told by the fan “suck my dick” and was spat at so that was why Aguero reacted the way he did. Bryan Swanson of Sky Sports tweeted that the FA decided not to charge Aguero but did charge both Manchester City and Wigan for “failing to control players” after the Delph red card.

Sergio Aguero trying to scrap with a Wigan fan ? pic.twitter.com/5SJ61atohx

The entire situation was filled with people who shouldn’t feel good about their actions. First, Aguero was in the wrong for going after the fan. But if what he said was true, it’s a normal human reaction to be upset and go after a fan who spits at you. I thought Aguero would get some sort of small suspension but the FA decided not to. And in addition, the fan was in the wrong if he said what he said and spat at Aguero. City is considering suing the fan for his actions.

Many people compared what Sergio Aguero did with Eric Cantona’s kick to a fan in the stands after he was subjected to verbal abuse. Cantona was suspended eight months by the FA. While they would look at the lack of punishment to Aguero compared to severe punishment to Cantona as being hypocritical, it should be noted that the people who ruled on Cantona’s ban in 1995 are probably not ruling on Aguero’s situation in 2018. Also, Cantona went into the stands while Aguero was on the pitch. It’s one thing to go into where the fans sit and fight them, it’s another when the fan comes onto the pitch.

Second, Wigan and their security staff failed in keeping all players safe that resulted in this situation happening in the first place. I understand that hooliganism in England isn’t what it was decades ago and it’s not how it is in more Eastern European nations, but when a couple thousand fans are running on the pitch, who knows what could happen. That fan could’ve been drunk or worse, had a weapon and wanted to try and attack an opposing player.

We’ve seen videos of lower league teams upsetting Premier League teams and the fans rush on the pitch and it’s a beautiful and exciting moment. That’s the “Magic of the FA Cup.” But it only takes one instance of one fan attacking a player before that beautiful moment turns tragic. Maybe what’s more important is not necessarily suspending Aguero or fining Manchester City or Wigan but banning pitch invasions before the FA is forced to ban them after a player or fan gets injured or killed as a result.