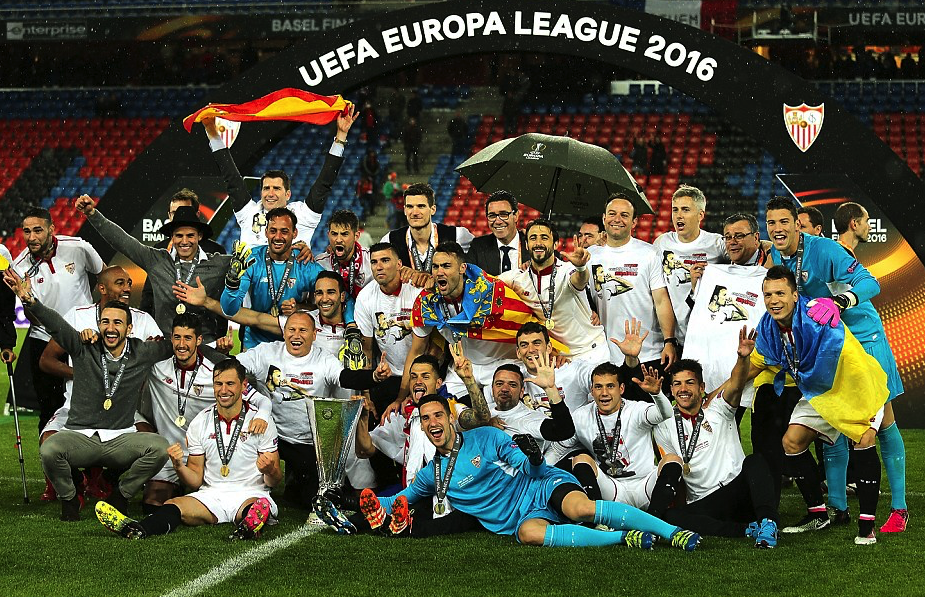 Imagine for a moment that your favorite college basketball team had won the NIT tournament three years in a row and five times in just over a decade. Not the NCAA Tournament, but the second-tier NIT.

Would you consider it a dynasty?

Or would you simply reason that your team was very good in knockout brackets, yet didn’t quite belong with the heavyweights?

That’s more or less the intellectual quandary Sevilla poses for us after completing its Europa League three-peat on Wednesday, becoming the first team since the 1970s to win three European titles in a row. It’s a towering feat, yet also one that requires some contortions of logic to truly celebrate.

Coke secures his brace to give Sevilla a 2-goal cushion over Liverpool. #LIVSEV #UELfinal https://t.co/YnX3VjF2II

So the Europa League victor is more like the 17th-best team in Europe, after those who make the knockout rounds of the big tournament. Or something.

Point is: it’s hard to quantify what Sevilla has done. It’s historic, to be sure, but is theirs a true sporting dynasty? Or merely a series of very good performance in the wake of failures to cut it at the truly elite level?

Either way, you have to consider the amount of turnover they have suffered through to achieve all this, regardless. At least two key players leave every single summer. Perpetually cash-strapped, Sevilla has to buy low and sell high, without fail, in order to put out a competitive team year after year. It does so through shrewd scouting and its gaming of a market in accordance to its place in the world – a big club that doesn’t quite belong among the upper crust and feasts on the efficient accumulation of its various crumbs instead.

So Sevilla has elevated to an art form the collection of good players who were surplus to requirements or overlooked by the even bigger clubs. Then it polishes them up and sells them (back) to those very clubs.

Last summer, for instance, it had to sell striker Carlos Bacca to AC Milan and right back Aleix Vidal to Barcelona. They had bought the former just two years early for 7 million euros and collected 30 million when he moved on. Vidal had cost them 3 million a year earlier and brought in 17 million.

The summer prior, Alberto Moreno, Ivan Rakitic and Federico Fazio yielded a combined 46 million euros. They had cost just 3.3 million. Combined. Fazio, by the way, has returned to Sevilla from Tottenham Hotspur on loan. Moreno, now with Liverpool, got skinned in a nutmeg move by Mariano on Kevin Gameiro’s equalizer in Wednesday’s 3-1 comeback in the final. Rakitic, of course, has thrived with Barcelona.

Three summers ago, Sevilla sold for 91 million euros and bought for 34 million, including Gameiro, who will likely yield several multiples of his 7.5 million fee, if he’s sold in the coming months. And… well, you get the idea.

Here’s another accomplishment: No matter who wins the Champions League final on May 28, it will be three years in a row that a Spanish club wins both the Champions and the Europa League. After all, Real Madrid will take on crosstown rivals Atletico, assuring yet another Iberian triumph. Here, too, it must be pointed out that winning the junior varsity tournament doesn’t count quite as heavily, but it’s remarkable all the same.

The context, then, is consequential. But it ultimately shouldn’t dilute our astonishment about Sevilla’s run. Considering its challenges and the endless attrition of its stars, a few qualifiers and caveats can be forgiven.

Theirs is a dynasty. Not one that places the club in the company of the truly great teams in the sport’s history, but that puts it in the pantheon of those that have done something very special anyway.