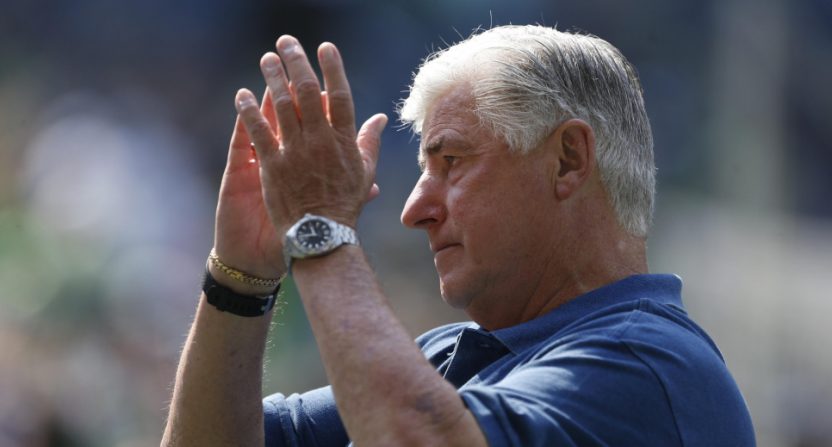 After decades of making his mark on multiple levels of the U.S. soccer scene, Sigi Schmid has passed away at 65. As per Kevin Baxter of The Los Angeles Times, Schmid died Tuesday, three weeks after being hospitalized at Ronald Reagan UCLA Medical Center in need of a heart transplant. And his passingt led to many discussing Schmid’s impressive contributions to American soccer over the years.

Born in Tübingen, West Germany, Schmid moved to the U.S. with his family as a child and later played for UCLA’s men’s soccer team as a midfielder from 1972-75. But he really made his largest impact on the coaching side, starting with his alma mater and coaching them from 1980-99 while winning three national titles and a whole lot of games along the way. Schmid also worked with U.S. Soccer, particularly as head coach of the U-20 team in 1998 and 2005, and he had a lot of MLS success, setting a record for coaching wins there with 240 regular-season victories and 26 postseason wins.

I can't find the words to express my gratitude to Sigi Schmid. He truly & fully believed in me as a player and as a person. It was hard to gain his trust, but if you did, you had it forever! I'd like to think I did just that…I'll miss my MLS father, I'll miss you Sig! #RIPSigi

When I talk about our American soccer culture, it’s with the respect and recognition that it’s been built by people like Sigi Schmid. I, and so many others, benifitted from his work and influence. He helped change and grow the game and made it better at every level. #ThankYouSigi

Played for, played against and worked with Sigi Schmid since 1998. He loved his craft and loved the sport of soccer and was very successful while doing so. My heart goes out to his family in this difficult time. RIP Sigi #MLS

Terribly saddened to hear the news of Sigi Schmid passing. I met Sigi in ‘87 as an opposing coach. He later became my coach, then my colleague and then a mentor and most importantly my friend. Always had time and knowledge to share. Thank you Sigi for your friendship. -RIP

Sigi Schmid…. on the field, a visionary and pioneer & his influence on the sport in the usa will be felt for many years to come. off the field, a gentleman and soccer savant… you’ll struggle to find many that loved it more.

Sigi Schmid was an amazing coach, a terrific man, a mentor, a great example, and someone who would always lend an ear in a time of need. This is devastating news. You will be missed Herr Schmid!

I remember going to watch UCLA games when I was a kid and dreaming of playing for them and for Sigi Schmid.

So when it actually happened and Sigi trusted me to do right by him on the field, it meant everything to me because I looked up to him so much.

Major League Soccer is devastated by the news of the passing of Sigi Schmid. Sigi will go down as one of the leading figures in the history of our league. https://t.co/xki3MDQ5Ka

Sigi Schmid will go down as one of the most influential & impactful members of the American soccer community. A great loss. RIP Coach.

RIP Sigi Schmid. One of America's greatest soccer coaches, both at the professional and collegiate levels—and a good man.

Coach Sigi Schmid: An amazing family man, a fantastic coach, a pioneer of soccer in the United States. We all will miss you very, very much SIGI ! All our prayers and thoughts are with the Schmid family and closed ones:https://t.co/xdfQPki6vy

This one stings… favorite Sigi Schmid story, after he was fired by Galaxy, called me up and invited me to, of course, German eatery Alpine Village. I got there, was 20
Members of LA press. He thanked us for how we covered team, bought us all lunch. RIP Big Man. 1 of a Kind.

Schmid had a massive impact on the world of American soccer as a college coach, a U-20 coach and a professional coach. The tributes out there show just how much he meant to so many different teams, players and fans.