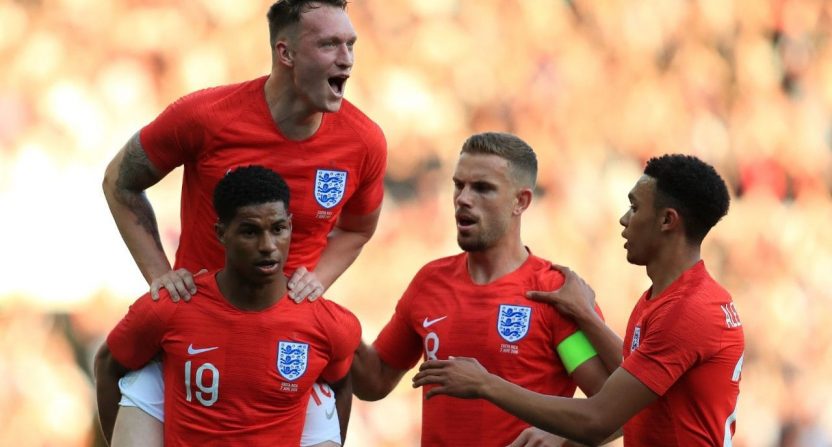 As England get set to begin another World Cup campaign, the vibe around the team this time around is completely different then it’s been recently. I know, you’re saying you’ve heard this before and we say this every year but this time it really is different.

it seems that more than anything, England manager Gareth Southgate wants to create a new culture around his England side. Since the team convened for camp following the conclusion of the Premier League season, Southgate has stressed that this team wants to remove themselves from the England failures of the past.

The players are all saying the same thing, that they don’t feel the burden of past England teams weighing on them. Now, of course this is just what players have to say when talking to the media. But this time around it actually feels different and not just because most of them have never even played at a tournament before.

There is no country that has a more tumultuous relationship with the media that covers them than the England team. Tabloid media is one of the things that England does best and they are ready to turn anything and everything into a story. They’re always ready to blame someone or something, whether it was something that happened on the field, or if they decide that the players’ wives and girlfriends have become too big of a distraction.

Therefore it’s no surprise that past England managers have tried to shelter their teams from the media come tournament time. They essentially locked up their players and tried to limit the media’s access to them as much as possible.

While they may see the move as protecting the players and keeping distractions to a minimum, it also allows the media to run rampant with whatever they like. This turns the fans’ view of the players from being their club heroes, to now being a bunch of overpaid primadonnas and thus shapes the narrative and expectations the fans have. This is how you end up with England fans booing the club after a 0-0 draw against Algeria in 2010, and Wayne Rooney publicly starting a war with the fans.

Under Southgate it’s been completely the opposite. Gone are the rigid ways of older “more established” coaches. Southgate’s youth and ability to try different things has become a breath of fresh air around the England team.

Right from the start, the buildup to this World Cup has been about giving the people more access to the players. Southgate understands his players are young guys with vibrant personalities. Sharing those personalities with the fans will help form a connection with the fans, not create more of a divide.

Since camp formed, the players and the FA have taken to social media to provide updates on what the team is doing. These updates aren’t just on the training pitch but off the field as well giving fans behind the scenes access that they’ve never gotten before. Four years ago a darts tournament was held among the England players and the players refused to divulge any information on the matter. This year, that same darts tournament was held, but this time the competitors weren’t just the England players, but members of the media as well. And everybody had a good time.

Prior to the team departing for Russia, the team held a Super Bowl style media day press conference, giving the media unprecedented access to all the English players.

The results are already noticeable. With the media’s new access the coverage has already been more positive, but it’s also more transparent. It’s not just being reported that the players are more relaxed, but fans can see it too. Despite the occasional tabloid piece like the Daily Mail posting a story about the players playing Fortnite.

Perhaps England really is feeling different and the players really aren’t feeling any sort of pressure. With the lack of burden combined with England creating a new identity and knowing what that identity is, this could really be the year England is poised to at best make a serious run in the tournament, and at worst not go home with their fans hating them.

Of course, the way this tournament is already shaping up, England winning their group could turn into a nightmare. At the moment there’s a realistic chance of a round of 16 matchup between Germany and Brazil, with the winner standing right in the path of the Group G winner.

Sometimes you just have to be careful what you wish for.