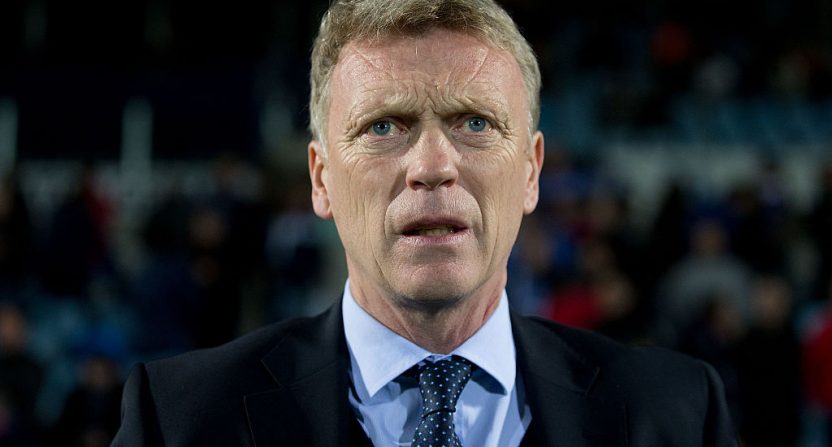 David Moyes has had a pretty steep fall from grace. After a very successful stint managing Everton, Moyes was the handpicked successor for Sir Alex Ferguson at Manchester United to take over from the legendary manager. Moyes only lasted 51 games at United before being sacked after an abysmal tenure.

After a stint in Spain with Real Sociedad, Moyes returned to the Premier League to manage perennial relegation strugglers Sunderland. And it’s there where he’s now under fire for behavior off the field as well as his team’s performance on it.

Via The Telegraph comes the news today that Moyes was caught on audio tape threatening to slap a female BBC reporter, Vicki Sparks. The incident came a couple weeks ago after a 0-0 draw against Burnley but is only now coming to light:

Moyes was furious following a question about whether the presence of Ellis Short at the game meant his job was under threat and criticised Sparks after the interview had finished.

However, it is understood the exchange was still being recorded and although she did not make a complaint, her employers were incensed when they heard the audio and accused Moyes of bullying.

“It was getting a wee bit naughty at the end there so just watch yourself,” Moyes told Sparks. “You still might get a slap even though you’re a woman. Careful the next time you come in.”

For Moyes to so flippantly scoff or even joke at striking a woman is troubling. Even if he was joking, and it’s clear from the audio tape that there is some laughter going on so both parties must have felt that it was in jest in the moment, it’s not a good look.

The manager did at least recognize that what he said was wrong and said apologized to Sparks immediately while also being profusely remorseful publicly in the wake of the incident. Moyes has said that he has the support of the Sunderland front office to remain in charge of the team in spite what happened.

“There will be anger about this and I deeply regret what I’ve done,” said Moyes. “‘It was the heat of the moment. The business we’re in, sometimes you only have seconds to think and answer. So, you know, it was the wrong thing to do.

“I have said that I regret it. I have spoken to the girl, who I apologised to, and she accepted it. I rang her on the Monday morning, she was fine and accepted it.

“I spoke to [chief executive] Martin [Bain] immediately after it happened. I spoke to  Ellis about it on the Monday morning as well. They were aware of it two weeks ago, but for some reason it has come out now.

Even though Sunderland has said they’re behind Moyes, I wonder if that will be the case as this story continues to gain more attention both in England and around the world. To even joke about slapping a female reporter for anyone representing the club, let alone the manager, is going to put Sunderland in a negative light.

Got a lot of time for David Moyes but his comments to a female interviewer are unforgivable. #safc

Combine this with the fact that Sunderland sit at the bottom of the Premier League table and look sure candidates to finally be relegated this season, it’s hard to see Moyes’ time at Sunderland lasting much longer.