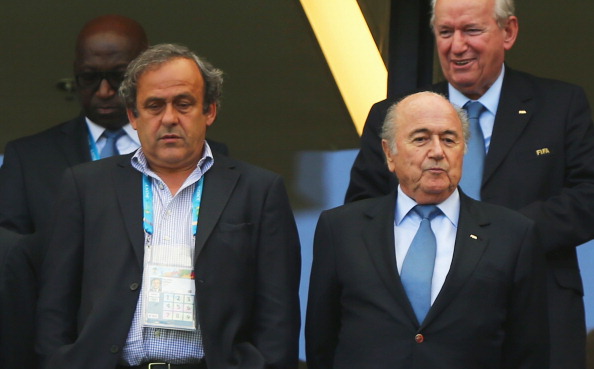 Sepp Blatter continues to be handsomely paid by FIFA despite being banned for eight years from the game for being a complete embarrassment to the organization and sport. How does he do it?

An exclusive report from Reuters says Blatter is still receiving his normal president’s salary from FIFA. Blatter was suspended by the world’s governing body for soccer last October amid ethics violations, but that suspension did not lead to a stop in being paid.

But Blatter, a Swiss national who has been president of FIFA since 1998, will continue to be paid until a new president is elected on Feb 26, the spokesman Andreas Bantel said. That would mean Blatter would have been paid for nearly five months during which time he was unable to carry out his duties, and a period in which FIFA has appointed an acting president, African soccer head Issa Hayatou.

The compensation sub-committee of FIFA’s Audit and Compliance Committee recently ruled that it could stop Blatter’s bonuses but not, according to his contract, his salary.

FIFA was so embarrassed by Blatter, they paid him to go away for five months.

“Until the election of a new president on February 26, Mr Blatter is the elected president and therefore – according to his contract – is entitled to receive his remuneration,” FIFA spokesman Andreas Bantel said in the Reuters report.

While Blatter may still be receiving his regular pay, it’s nice to see FIFA is stopping him from receiving any bonuses, as he is no longer carrying out the duties as FIFA’s president. They’ll probably send him something in a few years for “service rendered.” Maybe two million will be nice.

“The duty of supervision is listed explicitly in the target agreements for the payment of bonuses,” Bantel explained. “The compensation committee has therefore decided, at its last meeting, not to make any further bonus payments to Mr Blatter.”

What about Michel Platini, the UEFA president who received a $2 million payment from FIFA under Blatter’s supervision that was a key part of the investigation for corruptness in the organization? Oh, he’s still getting paid too, despite also serving an eight-year ban from the sport alongside his pal Blatter.

Just imagine if for whatever reason the NFL had to put Roger Goodell on the sideline as commissioner for 90 days and ban him eight years from the sport. Do you think the NFL would waste enough time issuing checks to a man who tarnished the image of the shield? Heck no. How FIFA allows this to happen is incomprehensible.