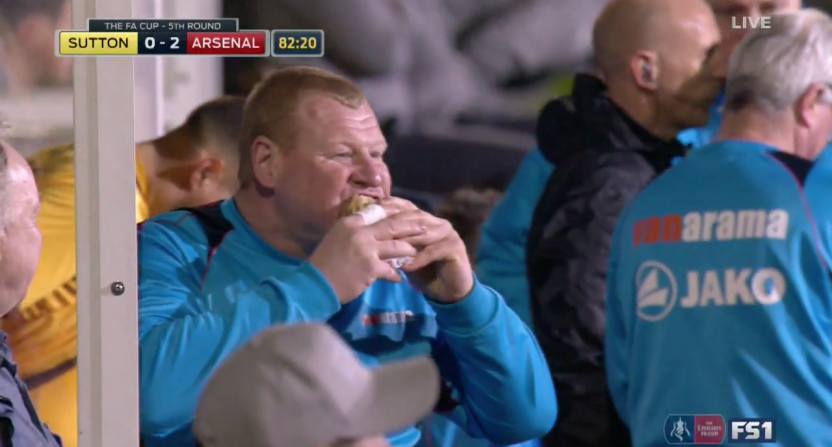 Sutton United, the non-league team that was the feel good story of this year’s FA Cup, battled valiantly  but saw their magical run end in a 2-0 home loss to Arsenal on Monday. Fellow non-league team Lincoln City is still alive and will face Arsenal in the quarterfinal.

However, there’s nothing to be ashamed of for a non-league side hanging in there against one of the richest teams in the world. The fans even rushed the pitch after the game to celebrate the run to the fifth round of the FA Cup. The announcers noted that Sutton “didn’t embarass themselves, they world hard.”

This was presumably the perspective Sutton’s backup goalkeeper, Wayne Shaw, held when he, err, celebrated with a pie on the sideline in the game’s waning minutes.

Shaw has become something of a cult hero for soccer fans who had never even heard of Sutton before this run. He is a 45-year-old former ice cream man who weighs and is nicknamed Sutton’s “roly-poly goalie.” He was even asked to pose naked for a magazine, according to the Daily Mail:

“A publication asked if they can photograph me naked,’ says the big man. ‘Like, everything off, except a pair of goalie gloves, apparently. They said they’ll position me in a way that covers me up, if you know what I mean.”

“Not sure what I’ll say to them. It’s definitely the strangest thing that’s happened to me in all this.”

He spent halftime of the game at the bar, serving drinks.

I kid you not. Sutton reserve keeper Wayne Shaw is in the bar at half-time. pic.twitter.com/f7014pXRBP

He also helped vacuum the team benches before the game.

Sutton United’s substitute goalkeeper hoovering the dug-out before the game in a pair of flip-flops. pic.twitter.com/WUKdZQMV0O

Shaw isn’t the only character on Sutton’s team. Their manager, who actually pays the team to be manager, vaped on the sidelines of their third round win.

Seeing this team on the same field as Arsenal sure is surreal, but it’s also why the FA Cup is one of the greatest tournaments in sports. The matchups are determined via random draws and everyone from the best of the best to the local pub league team have a chance to play each other. The TV and ticket revenue from these kinds of games helps small clubs pay for necessities, like toilets, and it gives us great stories we never would have heard about.

Happy trails, Sutton. We’ll raise a pie for you in the quarterfinals.