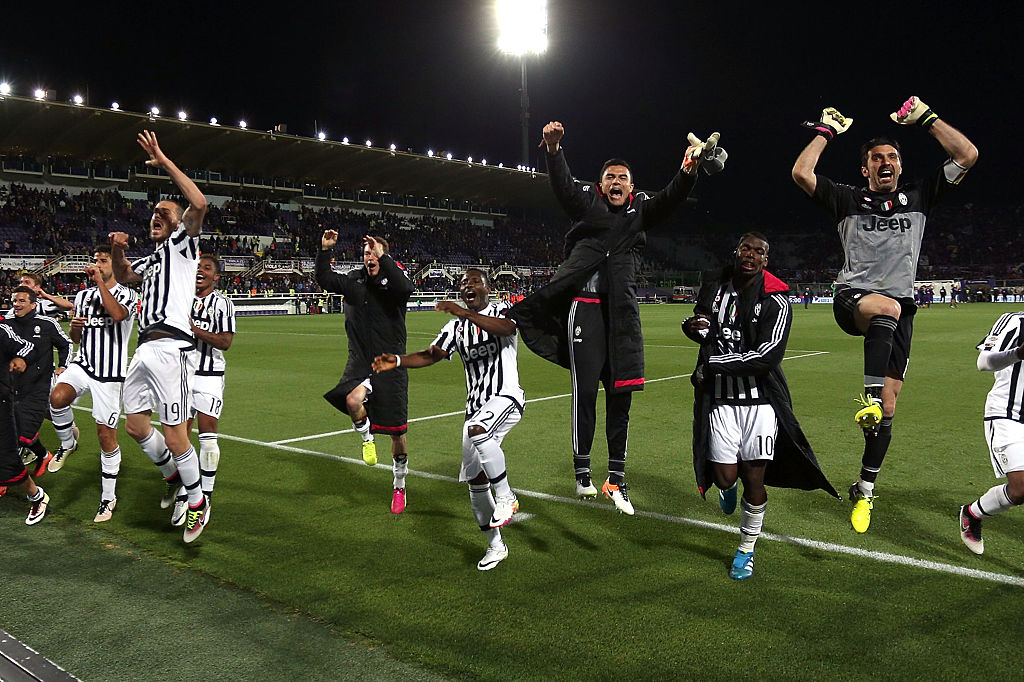 In one of his last acts as a Roma player, 39-year-old club icon Francesco Totti made Juventus the Italian champions for a fifth year in a row. He did so by setting up the wonderfully named Radja Nainggolan — a Belgian, believe it or not — for the 89th minute winner in Monday’s 1-0 victory over Napoli, which mathematically eliminated the only remaining challenger to Juve’s supremacy.

Yet if a team that has already won the league four years in a row winning it a fifth time sounds unremarkable, it hardly is.

Yet in spite of the acquisitions of able replacements in Paulo Dybala, Sami Khedira, Alex Sandro, Juan Cuadrado, Mario Mandzukic and others, the backslide was severe. Juve lost three of their first six league games, winning just one. Through 10 games, they slummed it in 12th place. But then came the turnaround. Since Oct. 31, they have won 24 of their 25 league games and tied the other while keeping 17 clean sheets, a preposterously good run of form.

It’s been a decade since the Calciopoli scandal disgraced the club and sent it careening down into Serie B for the first time in its history. But most everything has been put right since then. It took just a year to bounce back up. And if they aren’t quite back to the heights of the 1990s, when they reached three straight Champions League finals (winning only the first against Ajax in 1996, on penalties), they’re competitive on the continent again, reaching last season’s final.

Yet if Juve has bounced back, the rest of Serie A hasn’t.

It’s a sorry tale. And although some clubs are figuring things out, it’s plain to see now that the days when Italy had the world’s strongest league are long gone.

Inter and AC Milan are a shambles, with the latter perpetually up for sale – the former was recently sold to an Indonesian owner. Napoli are a perennial also-ran, never quite capable of re-scaling the heights of Diego Maradona’s days. AS Roma still don’t quite have their act together and are seeming always three players short from being a truly good team. Lazio, Sampdoria and Fiorentina aren’t big clubs anymore. Parma, meanwhile, went bankrupt a year ago and their relaunched successor was relegated to the amateur Serie D – they have already secured promotion back into the pro ranks and will play in Serie C next year.

Attendance remains robust. Of the above clubs, all but Sampdoria and Lazio draw an average of 30,000 fans per league game or more this season. Five of them – Inter, Roma, Napoli, Juve and Milan – bring in 40,000 or somewhere close to it. The issues lay elsewhere. Cavernous stadiums, largely owned by local cities, rather than the clubs – with the notable exception of Juventus, explaining their financial might over its rivals – have aged and look half-empty even when tens of thousands stream through the doors. It makes for an unappealing TV product. Consequently, broadcast deals have not mirrored the hyperinflation seen elsewhere, especially in England.

This underpins a general inability of the Italian clubs to monetize their fame and history, even though plenty of good and entertaining players remain. Only Juve now crack the top 10 of the sport’s most valuable clubs – in ninth place. Some 15 years ago, half of the top 10 was Italian and Juve trailed only Manchester United globally.

So is Juve’s dominance a sign of their strength or Italian soccer’s malaise?

Juve are once again a well-run club who are savvy at gaming a transfer market in which they aren’t quite heavyweights – although letting Kingsley Coman slip away to Bayern, on a loan no less, was a mistake. They are constantly restocking a deep talent pool, which allowed the Bianconeri to win the league by 17 points in each of the last two seasons – before the shuffle in the key positions.

But when the rest of its league lags behind, that could, counterintuitively, prove to make it harder to consistently go deep into Juve’s continental campaigns. Since their return, their participations have yielded one quarterfinals spot and last year’s runner-up finish – which, it should be said, was something of a Cinderella run. No other Italian side has made the quarterfinals since Milan in 2012.

Without consistently strong domestic opposition, Juve will have a harder time growing back into the European juggernaut they were two decades ago. It’s hard to thrive in the business-end of the Champions League when you’re not prepared for that kind of game by occasionally facing an opponent of similar difficulty on your domestic calendar.

In that sense, Serie A’s decline threatens to put a ceiling on Juve’s re-ascent.

But then this season has proven that The Old Lady, so nicknamed, still has the capacity to surprise.