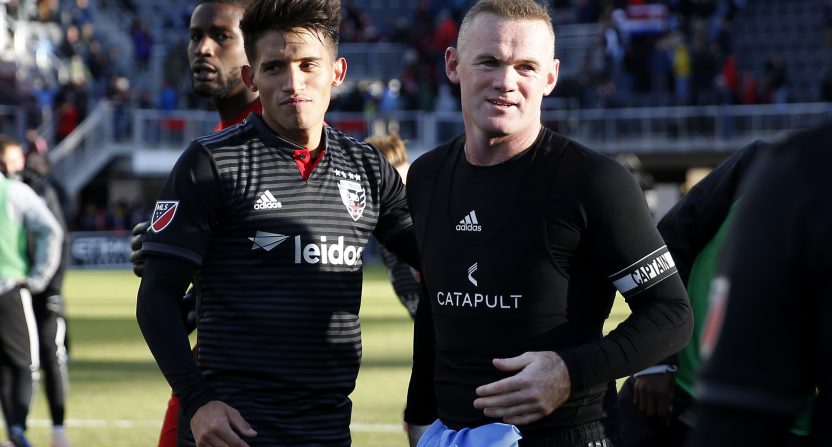 One of the most aggravating aspects of sports media in 2018 is not just living in a land full of the hottest of hot takes, but that there’s zero accountability for those takes. Analysts get paid millions of dollars to fire off their daily hot takes, but even when they’re wrong there’s nary an acknowledgement they got something wrong. Hell, one of Mike Francesa’s most famous sayings is “I nevah said dat!”

That’s why @OldTakesExposed has become so popular on Twitter. Yet so often when he posts a cold take, that media member who is the subject of said take is up in arms, as if you lose all the credibility you have because of one bad take.

Well here I am raising my hand. I was wrong.

Back in May when DC United’s signing of Everton striker Wayne Rooney was announced, I wrote that the signing was unlikely to be good for either DC United or MLS.

Rooney seemed so washed up in his final few years in England that if he came over and played well it would look like an indictment on the quality of the league. If he came over and struggled, it would reaffirm the ‘MLS is a retirement league’ image that the league has been trying to shed.

But I forgot one major wildcard, Wayne Rooney himself.

The Wayne Rooney that left England was not a happy Rooney. His status at Manchester United faded in his final year, culminating with him unceremoniously leaving the club. His return to Everton was heralded, but a very quiet second half of the season saw him leave with a whimper.

Rooney started the season playing up front for the Toffees. He scored 10 goals in the first half of the season before a conversation with new manager Sam Allardyce who felt that the team would play better if Rooney were dropped into midfield. Being the team first player that Rooney is, he accepted. Everton did play better, but Rooney didn’t score another goal, and his enthusiasm for the game seemed to be gone.

Throughout the early days of Rooney’s career, he was always described as a player with an incredible enthusiasm for the game. Pundits often said that Rooney didn’t care where he on the pitch he played, so long as he got to run around and kick a ball for 90 minutes.

From the moment Rooney arrived in the capital that enthusiasm was back, and why shouldn’t it be. He fell into a perfect situation. DC has a young team where Rooney can not only be a leader, but a mentor as well. Rooney’s personality has always enabled him to get along with players of all ages. Gary Neville once described him as the perfect England captain because of his ability to move so seamlessly from talking tactics with the manager to going and playing FIFA with the younger players. Wherever he was, he belonged.

That translated to the field right away. The Wayne Rooney of old is back. Albeit he’s a little slower doing it now, but the slower pace of MLS compared to the top European leagues lends itself well to that. Playing as United’s number 9, Rooney is back to doing what he does best, a little bit of everything. He drops deep to collect the ball, he shows off his exceptional passing skills, and most importantly, he scores goals.

By now we all know the story. Rooney walked into a team that had two wins in 14 games, dead last in MLS. In the 19 games with Rooney, DC United have won 39 points, with 12 wins and three draws. Rooney has led the charge with 12 goals and six assists.

Rooney bagged a brace last Sunday as DC United clinched a playoff berth with a game to spare. In a way, it doesn’t even seem remarkable. Instead, ever since Rooney made “the play” to grab a last second win against Orlando in August, it seemed downright inevitable. It’s not a stretch to say that play has come to represent exactly what DC United have been since Rooney’s arrival, a team that doesn’t give up, no matter how far out of it they seem.

You can say it’s still not great for the league that a team in dead last in July can make the playoffs with a game to spare. However, it should be noted that due to the construction of Audi Field, DC United had a backloaded schedule, with most of their games in the first half of the season being on the road. When Rooney arrived, they were nine points out of the playoffs, but did have five games in hand on Montreal.

At this point, it’s hard to call the signing anything but an astronomical success. Sure Rooney was always going to provide a short term attendance boost, but if DC wasn’t winning, that would fizzle out by September. Instead, a stadium in the heart of Redskins country is filling up on NFL Sundays. Friends of mine in the DMV area who aren’t soccer fans are making deposits for season tickets next year. What more could you ask for?

DC United are hot at exactly the right time of year. That makes them dangerous, and I certainly wouldn’t sleep on them in the playoffs.