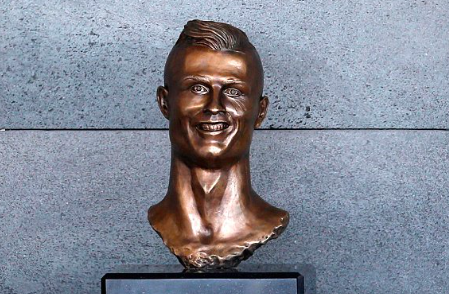 One year ago today, the world was introduced to the infamous bust of Cristiano Ronaldo that was to honor the Portugese footballing superstar at an airport in Madeira, Portugal that was named for him.

The sculpture from local artist Emanuel Santos was instantly met with internet infamy as it became a meme due to its creepy smile, unbalanced face, and general appearance like it should be something from a Stephen King novel.

When things like this become an internet meme, it’s easy to forget the people whose real lives are actually affected. And a year later, Santos has had his shot at redemption.

Bleacher Report commissioned the artist to make a second attempt at a Ronaldo bust a year after the first try. And the results speak for themselves. It’s a fantastic rendition that looks spectacular, like something you would see in Canton at the Pro Football Hall of Fame.

The artist who made Ronaldo's bust a year ago got a second chance.

He did better this time. pic.twitter.com/tL8buSyfO9

As part of Santos’ second Ronaldo scultpure, Bleacher Report also produced a longform piece by Kelly Naqi diving into Santos’ family life and the effect that becoming famous on the internet for the wrong reasons had on him and his family.

“Tiago was amazed, super proud, saying, ‘My dad is a sculptor! I’m very proud of my dad!'” Gouveia remembers. “Everyone that came by our house, he went to get the football saying, ‘I have Cristiano Ronaldo’s ball!’ It was being a spectacular day.

She tries to keep her composure but can’t. Tears pour down her face and Santos—sitting on a couch to her right—drops his head, seemingly absorbing her pain and renewing his own. Tiago plays with a toy car nearby, blissfully unaware.

“I’m remembering how tough those days were at the time,” she says, wiping her eyes. “[It started] around [3 p.m.]. My sister called me to say, ‘Hey, have you seen what’s on the internet? There are so many people saying bad things about it. People were making comments like ‘You should kill yourself.'”

Pedro Vasconcelos, a consultant working in information technology for the company that the airport contracted to run the event, says he was stunned at the social media metrics piling up. There were close to a million comments—many of them nasty—in the first 24 hours.

Santos’ perseverance through the negativity is actually an inspiring story and he shared some wise words about the last twelve months and the belief he maintained in himself as an artist.

“One day,” he says, “I want my son to understand that if he enjoys doing something very much, [he] doesn’t let himself be defeated with negative criticism. Sooner or later, if we believe in ourselves and are persistent, we can succeed in life. Even though his father never had a degree, isn’t a teacher or a doctor [and comes] from a poor family, he was able to make something of himself in this world.”

There’s also a video documentary that goes along with Santos’ story produced by B/R.

A year ago today, Emanuel Santos’ Cristiano Ronaldo bust was unveiled. The world laughed at him.

We challenged him to try again. He accepted. pic.twitter.com/TLV1iJv1MN

In case you’re wondering, the second sculpture is on display at Bleacher Report’s London office according to the article. Here’s hoping they can make a trade with the Madeira Airport so that visitors can enjoy the new and improved version for years to come.