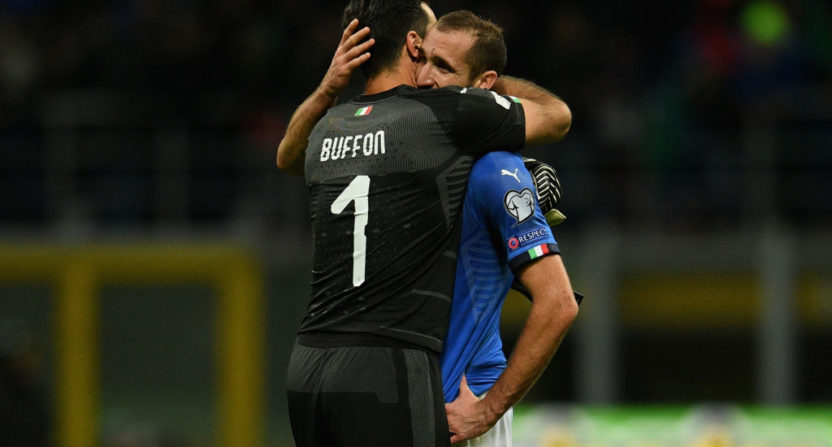 There are 211 countries in the FIFA rankings and with only 32 spots available at the World Cup so 179 countries will be falling short of their World Cup dream. This summer’s tournament will be without some of the game’s biggest stars. With teams like Italy, the Netherlands, and the USA all failing to make the cut, the World Cup’s missing in action list is going to feature some surprising names.

Every year you could create a decent team with World Cup no-shows. But in 2018, you could almost imagine that a team filled with players not at the World’s biggest tournament could actually win the thing. Here is a subjective Best XI that will be watching Russia 2018, rather than competing there.

Gianluigi Buffon is one of those few players that is nearly universally loved. The 2006 World Cup winner will not feature in Russia as the Azzurri failed to qualify for the first time since 1958. Whatever the problems Italy are having, Buffon is certainly not to blame. Buffon has been involved in every World Cup since 1998, so 2018 will feel very strange without him.

Goodbye to an ??@azzurri legend ?

CONMEBOL qualifying can be brutal. Ecuador found that out this year as they finished 8th out of 10 teams. After qualifying for the 2014 World Cup, the South American nation struggled this round. An unfortunate casualty of those shortcomings was Manchester United’s Antonio Valencia. Valencia is nearing 100 caps for his country, but won’t get to add to that total this summer.

Like Buffon, Giorgio Chiellini announced his international retirement after Italy’s failure against Sweden. The 6 foot 2 defender has been a rock at the back for club and country for years. He’s on the wrong side of 30, however. With Italy failing to qualify, Chiellini has lost his last chance to win a World Cup. He was just a little too young to make the 23-man squad in 2006.

Along with Buffon and Chiellini, Leonardo Bonucci rounds off a dominant defensive trifecta that won’t be taking part in Russia. The Italian defender misses out on another World Cup in large part because those in front of him were not creative enough to score. Italy only allowed nine goals in 12 qualifiers, so the problem was not at the back. Bonucci is 30, so there is still hope for him that he will be ready to go in 2022.

Bayern Munich’s first choice left-back has won so much at the club level, but his time with his national team has been barren. Alaba’s only major tournament experience has been at the 2016 Euros which ended in a quick exit for them. Austria hasn’t been to a World Cup since 1998. The country hasn’t made it out of the group stage since 1982. That’s unlikely to change with little depth after Alaba.

This has to be a bitter pill to swallow for Italy. Marco Veratti, one of Italy’s best and most creative midfielders, was suspended for the second leg against Sweden. Would Italy have fared better against a defensive Sweden team if the PSG man was available? That’s a big what if. What is for certain, however, is that at only 25, Veratti should still be in his prime when the next World Cup rolls around. Italy just needs to qualify for it.

Bosnia and Herzegovina made their first-ever appearance in a World Cup in 2014 (They had appeared a few times before as Yugoslavia). Their star player Miralem Pjanic impressed in Brazil during the group stage. Sadly, the Juventus midfielder will be watching this summer, rather than playing. Pjanic’s passing ability and powerful long shots will be sorely missed.

After RB Leipzig burst into the Bundesliga last season, Naby Keita has been one of the hottest properties in Europe. He’s headed to Liverpool next season, but he won’t be headed to Russia this summer. Guinea has never qualified for the World Cup. They had a decent chance this time around, making it to the final round and featuring in a group without any traditional African powers. They only managed one win, however, and the engergetic 22 year old, must wait four years for another chance.

Gareth Bale might be the safer pick on the wing, but this is a slightly sentimental choice. Arjen Robben retired from his national team shortly after the Dutch failed to qualify for Russia. The 33-year-old will likely go down as one of the Netherlands’ all-time greats. He led Oranje to second and third place fishes in 2010 and 2014 respectively. It will be strange to see a World Cup without the Netherlands. It’s a shame we’ll never see Robben don his nations colors again.

Another country that struggled through a brutal South American qualifier was Chile. The reigning Copa America champions came close but didn’t manage to do enough to get into this summer’s World Cup. Chile has been dark horse favorites in the past, including one crossbar away from getting past Brazil in 2014. Alexis Sanchez is one of the game’s best players and his absence will be a bummer for many fans. Between Chile and Arsenal, it’s been a frustrating year.