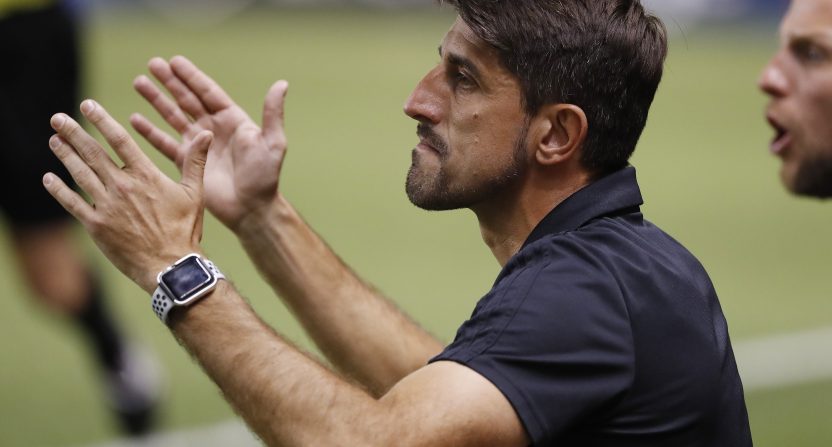 In the winter of 2017, coach Veljko Paunovic had his first real chance to put his stamp on the Chicago Fire. He had been in charge for a year and it didn’t go well. The Fire “won” their second consecutive Wooden Spoon in 2016, finishing dead last in the league, and had few players to build around.

They had taken the first steps toward shifting their long-held state of mediocrity before 2016, when they dealt Homegrown attacker Harry Shipp to Montreal. Shipp was the only semblance of a successful young player to come through Chicago this decade, and he was at one point seen as a cornerstone. Trading him was a statement of intent from Paunovic.

Their failure to make good on overseas signings (see: Gilberto, among numerous other examples) held back their progress. GM Nelson Rodriguez cut dead weight after the 2016 disaster, declining options on players like Razvan Cocis and Nick LaBrocca. The rebuild began once those players were out.

Paunovic and Rodriguez signed Nemanja Nikolic and Juninho in December 2016 and set the league on fire by trading for Dax McCarty the next month, adding the Supporters’ Shield-winning McCarty to a new-look central midfield. (The $400k of allocation money sent to New York for McCarty seems small now, but in the early days of dollar amounts being revealed, it was a splash.)

Chicago’s approach was to use their Designated Player slots and allocation money to get better instantly. It was, essentially, a one-year rebuild, a concept unique to MLS. Even with a restrictive salary cap, it is much easier for MLS teams to quickly get better than it is for MLB, NFL, NHL and NBA teams. There’s little incentive to tank or bottom out in MLS, because there’s an accessible, deep pool of talent constantly available. A by-product of playing the world’s game.

Bastian Schweinsteiger, signed as a DP in late March, was the final piece of the puzzle. He didn’t make a ton of sense tactically at the time, but it didn’t matter: Bastian is Bastian, and his job was to get on the ball a lot and pair with McCarty. With Paunovic finding productive roles for previously marginalized players — notably Matt Polster, who became one of the league’s best right backs – Chicago rose quickly.

Paunovic had them playing an exquisite possession-based style of play, emphasizing passing through midfield and distribution to the flanks — where remained arguably the team’s best player, David Accam. Nikolic won the Golden Boot, and while the Fire lost handedly at home in the knockout round of the playoffs, the pieces were seemingly there.

That was not the case. They traded Accam in the offseason to Philadelphia for a sizable allocation fee, a decision that looks in hindsight like a poor one. This season, they’ve lacked the dynamism and game-breaking abilities of Accam in attack, making them predictable and slower in build-up. Without a number 10, a weakness that was papered over last year, the Fire have been decidedly less threatening with the ball.

Per American Soccer Analysis, Chicago have just 10.3 shots per game, worst in the league, and they’re 20th in expected goals for per 90. Their xGD/game is the worst in MLS. They’ve taken a significant step back, and winter acquisition Aleksandar Katai hasn’t been able to overcome the deficiencies.

The Fire are 10th in the Eastern Conference — last on points-per-game. The loss of Polster to numerous injuries has hurt, and left back Brandon Vincent has been shuttered to center back due to depth issues. They stood pat in the summer transfer window. Paunovic, whose contract expires after this season, is looking at a blurry future in Chicago.

Fan disapproval is high just a year after the Fire were one of the most entertaining teams in the league. Supporters groups are unhappy with Rodriguez for various injustices. Things are getting bad in Chicago.

Their on-field problems come down to inaction. They never really improved, and losses of players like Accam, Joao Meira and Polster (to injury) have hurt worse than anticipated. Players like Jonathan Campbell, Vincent, Daniel Johnson and Grant Lillard haven’t shown signs of growth.

Paunovic has tried a few things to pull the Fire out. He’s put Schweinsteiger in a number of different positions, from old-fashioned sweeper to number 10, but all that’s done is cause further instability. The defense is error-prone and weaker than it was last season. Injuries to McCarty haven’t helped.

They’ve lost seven straight games in MLS and were swept out of the U.S. Open Cup by the Union in the semifinals, a decisive loss in their most important game of the season. The playoffs are a grim possibility at best.

It’s hard to look at the winter of 2017, that one-year rebuild, and point out flaws. It’s their future execution that was imperfect, and their failure to improve in a number of areas. But it’s become clear that growing and spending like the Fire did that winter, and like Orlando City did before 2018, is a more difficult proposition than it may hypothetically seem.

Cultivating a culture of growth is delicate in those roster turnover-heavy circumstances. The Fire left fatal defects in place for too long, and are paying for it.

1 thought on “The Chicago Fire got stale, and now their immediate rebuild is falling back apart”