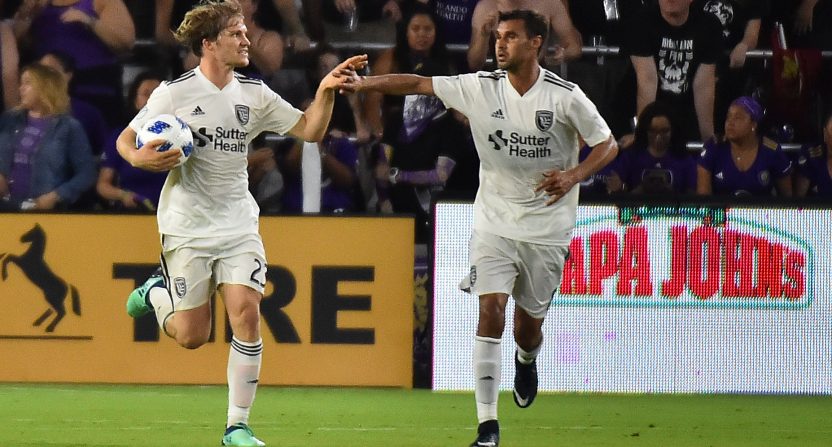 Last year, the San Jose Earthquakes ducked into the postseason under coach Chris Leitch. Their attack was relentless and they focused on keeping the ball.

They played something resembling a 4-2-4 and thrashed numbers forward, all but neglecting a defensive shape and leaning instead on overwhelming teams with a cadre of dribblers, creators and scorers.

It was an overcorrection from the Dominic Kinnear era, which emphasized tight organization and devalued possession. Kinnear loved his 4-4-2 and hoarded defensive midfielders. Leitch, himself not yet 40, incorporated younger players and devoted the Quakes to the polar opposite tactical ethos of his predecessor, like teens rebelling against their parents.

Simply qualifying for the playoffs was an improvement over the outdated Kinnear, as San Jose had missed out in both of the most recent Kinnear years. They were a fatally flawed team, though, heavily benefitting from a dilapidated Western Conference. Their goal-differential, remarkably, was an ugly -21, and they were one of five MLS teams to leak 60 goals.

Fittingly, they got whacked back to 2012 in the first round in Vancouver. That 5-0 loss was likely the catalyst for the front office to move Leitch back to his prior role as technical director and hire a new manager. Thus, they welcomed Mikael Stahre in November from Sweden.

Stahre harmonizes with the progressive mentality of Jesse Fioranelli’s Quakes. He is just 42, young in soccer coach years, and is not a former professional player, having risen through the youth coaching ranks instead. He was given a team stockpiled with talent and tasked with putting it together. The early returns have not been impressive. Yet.

Despite hopeful preseason expectations, the Quakes took just five points from their first six games, shipping 13 goals in that span. Their 3-2 loss last Saturday at Orlando — which was not nearly as close as the score indicated — was a painful illustration of their disorganization and Leitch-era defensive prowess. They are mistake-prone at the back and gappy all over.

Anibal Godoy and Florian Jungwirth are a revolving door in midfield. Whatever distributive abilities exist they possess do not nearly make up for their inadequate protection of the backline, which is bad enough without opposing attackers building houses in the half-spaces. Yefferson Quintana, Harold Cummings and Francis Affolter are making catastrophic mistakes in central defense like they play for Minnesota United.

Full backs Nick Lima, Shea Salinas, and, for one game, Jungwirth, overlap and leave acres of space behind them. Even in Stahre’s hybrid four-at-the-back formations, which require the wingers to track back at some level, none of the wide attackers are putting in significant work up and down the touchlines.

Team defense — i.e., players working together to rotate and cover gaps — is not really a thing that’s happening in northern California. As a result, they’ve given up at least two goals in all but one game.

Orlando had an easy time breaking through their midfield:

In the above example, it took no more than a couple of passes to disjoint the Quakes’ defense. Multiple Lions sit down in the space between the midfield and backline (which cannot happen), so when a pass successfully hits the feet of one of those players, a center back has to step to the ball. That movement opens a huge hole in backline, which becomes a direct and simple path to goal. Orlando and other San Jose opponents consistently took advantage of this.

These kinds of overloads are all too common in Earthquake games. When one of the number 6s has to step across to cover for a winger, he inevitably opens a hole in the middle — a peril of playing with two, instead of three, deep midfielders. If the other 6 rotates to cover for the one that shifted to the flank, teams can hit horizontal switches and easily overwhelm the opposite full back.

Attack San Jose up the seam and you can break open Godoy and Jungwirth, who risk giving up space on their shoulders if they commit too much to the middle. The Quakes’ attacking style, which still devotes four forward at almost all times, is putting its back six in precarious positions.

It has been their transition defense and their propensity to step too high that has killed them the most. The full backs are getting caught forward too much, and given the numerical disadvantages that already hinder them defensively, the consequences of over-aggression are calamitous.

Due to simple mistakes and mental blunders, they are giving up clean odd-man rushes at the rate of a hockey team that can’t forecheck. 3-on-1s should not be a thing in soccer. They are a very real thing in San Jose.

On top of their defensive problems is a problematic dilemma farther up the pitch: Chris Wondolowski’s role in the attack, and whether they can support the club legend as a consistent starter.

Wondo, 35 and the second-place all-time MLS goalscorer, is a second forward who performs best next to a number 9 and at this point in his career doesn’t fit well in any position besides that. Unless San Jose were to switch to a 3-5-2 (which shouldn’t be completely out of consideration), they’re locked into a 4-4-2, which has shown to be leaky defensively and does not suitably unleash the Quakes’ other attackers.

Moving him full-time to a super-sub, allowing them to play a more defensively stout 4-2-3-1 or 4-3-3 that could fit young passing mid Jackson Yueill, feels wrong. This is Wondo we’re talking about, the dedicated scorer who can smell Landon Donovan’s all-time record. Benching him would be difficult. But it is present as a potential solution. It would be ignorant to disregard it.

The hope that had many predicting them as top-three contenders in the Western Conference has not fully departed. Danny Hoesen is a capable number 9. Magnus Eriksson likes to work in off the flank and distribute, a valuable trait. Jahmir Hyka and Vako Qazaishvili are skillful on the ball and use their low centers of gravity to duck under defenders and attack space.

Yueill and Tommy Thompson deserve bigger roles, Yueill as a game-controlling number 8 and Thompson somewhere near him — on the wing, as an advanced midfielder, or even at full back. All is not lost on the backline, if they can straighten out their core of central defenders like Columbus did last year with Jonathan Mensah. Fatai Alashe deserves minutes in the meantime.

It’s on Stahre to sort everything out and make the difficult decisions. He has to organize a more concrete team defense, and he has to plug the holes that have them oozing big chances. Do that, and you’ve got a team that can compete.