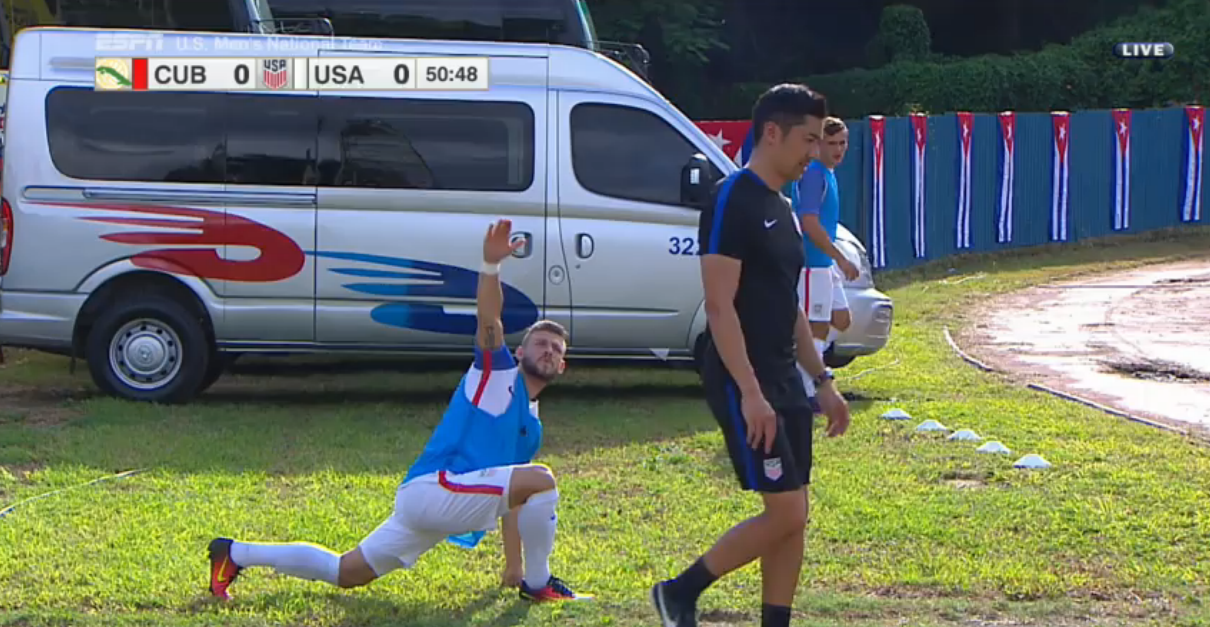 In a sign of goodwill, Cuba invited the United States to play a soccer friendly in Havana for the first time since 1947 (the U.S. last played in Havana in 2008). Given the economic state Cuba is in, their sports facilities aren’t necessarily what the USMNT players would be used to in the States or in their club teams.

In World Cup Qualifying, the United States go into some rather poor countries within Central America and the Caribbean and play on field conditions that rec league teams wouldn’t be playing on in the U.S. Cuba, who prefers baseball over soccer as their sport of choice, has taken this to another level.

The field at the Estadio Pedro Marrero is so bad that it’s proven difficult for both teams to effectively move the ball upfield. The ball is literally bouncing around when passed on the ground and essentially making ground passing irrelevant. According to Ian Darke and Taylor Twellman on the ESPN2 telecast, there is no running water and the field is maintained with a regular lawn mower like you or I would use. While this isn’t necessarily shocking, it hasn’t stopped many to point out the atrocious conditions.

Between field conditions and play, completely unwatchable half. I think the Caddyshack gopher has been hanging around the pitch. #USAvCUB

This field is horrendous. #USMNT #USAvCUB

US players won't say it, but they 100% think this game on this field is a joke.

I don't mean to sound elitist and know the realities of CONCACAF, but this field is so bad it makes this entire game kind of meaningless.

I get it. A Cuba/United States game in Havana goes a long way to normalize Cuban/U.S. relations. That is important and I 100% support that. I also get that Cuba is a poor country so playing conditions won’t be ideal and I wouldn’t expect state of the art facilities. But the timing of this game just seems bad in a soccer sense.

The United States is set to start the final round of World Cup Qualifying in November and start out against the two toughest opponents in the six-team “Hex,” Mexico and Costa Rica. This game in Cuba doesn’t really do anything to prepare for that. Not to mention that the USMNT players seemed like they were more focused on not getting injured than actually playing to their ability, and that caused Cuba to hold strong with the United States and keep the game close.

Maybe Christian Pulisic getting knocked around a bit will give him a sense of physicality for The Hex, but if you cannot pass on the ground and are playing a vastly less talented team in Cuba (despite playing well against the U.S.), Jurgen Klinsmann, the USMNT coaching staff and the players cannot possibly learn anything tactically from this game that would help them in World Cup Qualifying. It’s great for PR and for both nation’s governments but it’s not going to help the actual team in Columbus next month.