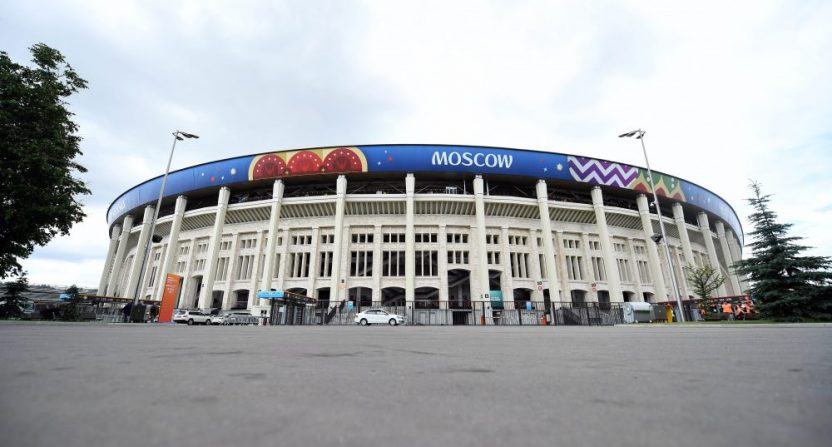 The world’s biggest sporting event begins on June 14th in Moscow when the World Cup kicks off between Russia and Saudi Arabia. All totaled, there will be 48 games played in the group stages between now and June 28th that will pare the field down from 32 to 16 nations. The group stages contain so many interesting storylines and matchups that are sure to pique the interest of even the most casual soccer fan. Others not so much. We’re here to try to help you make sense of it all so you can mark your DVRs for the must-see games in our World Cup Group Stage Watchability Rankings. All times Eastern.

Let’s be honest, none of these teams are really threats to make a deep run in this year’s World Cup. The host nation traditionally kicks off the festivities with the opening match and Russia-Saudi Arabia may be the weakest opening game in the history of the World Cup. Maybe it will be worth watching just for that fact alone, but don’t expect it to be an instant classic by any means. At least the good news is that it’s just going to get better from there!

Group G and Group B should be the most straightforward groups in the tournament when it comes to projecting who will advance. It would take a massive upset in either group to see the two favorites in each (Spain/Portugal in Group B and Belgium/England in Group G) fail to advance to the knockout stages. In Group B, Tunisia has one won game in their entire World Cup history and are winless since 1978 and this is Panama’s first-ever appearance. In Group G, Morocco has just two wins in their World Cup history (1986 & 1998) while Iran has one win (1998). Having said that…

… given England’s propensity for heartbreak and schadenfreude in major tournaments, it may be worth checking in on these matchups to see whether or not upset-minded Tunisia or Panama can wreck the hopes and dreams of the home of the sport and significantly increase their World Cup victory total.

Count this group of games as ones where more fancied nations should be able to easily take home three points without much trouble, but there’s an outside chance for an upset. In particular, Brazil-Costa Rica and Australia-France should be very compelling to see where each team stands. Brazil is one of the top favorites for the tournament and will look to quickly make amends for the 7-1 disaster on home soil in 2014 while Costa Rica will be looking to double down on their Cinderella quarterfinal run at the same tournament. France can win the whole thing or bounce out at the group stage, and although Australia was a disappointing 0-3 four years ago, they’ve put up some impressive wins in recent World Cups, even making it to the knockout round in 2006.

You won’t find many of these teams among the favorites or even the dark horses in the 2018 World Cup, but three points either way in these matches could prove to be the vital difference between leaving Russia as an afterthought or making a run into the knockout round. Peru-Denmark could be one of the sleeper games of the entire tournament. The Danes will be led by Premier League stars in Leicester City goalkeeper Kasper Schmeichel and Tottenham’s Christian Eriksen. Peru was one of the great stories in qualifying from South America and will receive a gigantic boost in the overturned suspension of captain Paolo Guerrero. He scored twice in a warm-up victory over Saudi Arabia and could inspire Peru to surprising heights in Russia. The winner of that match should be in prime position to make the group stage.

After their opener against Saudi Arabia, Russia will have their work cut out for them to make sure they advance out of the group stage and into the knockout round. With all eyes on the country, it would be a massive disappointment for the hosts to bow out so early. While victory against Uruguay and the strike tandem of Luis Suarez and Edinson Cavani will be a tall challenge, they may find greater success against Egypt. Thankfully, the Pharoahs will have a healthy Mohamed Salah after his unfortunate shoulder injury forced him off in the Champions League Final for Liverpool. If Salah replicates his Premier League record goal-scoring form, he can take Egypt further than they’ve ever been before at the expense of the host nation.

Sweden, and the entire world, will greatly miss the mercurial Zlatan Ibrahimovic at the World Cup. Because of Zlatan’s presence, Sweden hasn’t normally been associated with a great defense, however they held Italy scoreless over two legs in the UEFA playoffs to make it to Russia. Will they be able to stonewall a German side with one of the most talented attacks in the world? A German side whose B team would probably make the quarterfinals and had the luxury of leaving Manchester City winger Leroy Sane at home?

Now we get to the really compelling matchups. All of these games could theoretically be deciders on who makes it out of the group stage and who goes home. The competition won’t be more compelling than in Group D where any combination of the four teams can advance. Nigeria has already made waves for their impeccable, trend-setting style on the way to Russia. But don’t overlook their talent on the field as well. Would you believe that Nigeria has won the U-17 World Cup three times since 2007? Is it time for the Super Eagles to further replicate that success at senior level and move past the Round of 16 for the first time.

Expect some of the top nations to get a fierce test from their group stage rivals in these games. The Argentina-Croatia game in particular features a wealth of attacking talent all over the field. And anytime you can have a taste of the Barcelona-Real Madrid rivalry in international play (with Real’s Luka Modric leading Croatia and Barca’s Lionel Messi leading Argentina) it always adds an extra level of intrigue.

With the USA failing to make the World Cup, the Iceland bandwagon should be at maximum capacity for the World Cup. Iceland became the darlings of the soccer world at Euro 2016 where they reached the quarterfinals and even picked up a win in the knockout round over England, one of the most surreal results in the history of the competition. The road to the knockout round in Russia couldn’t be more difficult with a stacked Group D awaiting them, but results in either or both of these games could lead to another deep run that will make the Viking clap thunder around the world.

With Group A being the most wide open group that we’ve seen in some time at the World Cup, the winner of this game should set themselves up very nicely for a decent run into the knockout round. The matchup of former Liverpool star Luis Suarez against current Liverpool star Mohamed Salah is sure to produce some fireworks. Uruguay definitely has the more accomplished roster, but who knows what awaits especially with Suarez’s infamous combustibility. The last two tournaments have produced a famous goal-line red card and a biting incident from Suarez. What could 2018 possibly bring?

It was four years ago that James Rodriguez burst onto the international scene for Colombia. James scored the goal of the tournament and was arguably the best and most influential player at the 2014 World Cup as they reached the quarterfinals. The Bayern Munich star’s matchup against teammate Robert Lewandowski will be appointment viewing. These are two nations that will go as far as their star players will lead them.

Mexico will carry the CONCACAF flag into this year’s tournament without the United States and interestingly enough, Fox is going all in on El Tri , hoping that a good run will help carry some much needed viewership. Right away we will find out just how much Mexico can deliver on those hopes and dreams in the 2018 tournament, with their first group stage game coming against the defending champions. Any kind of result against Germany will lead to a significant uptick in interest and coverage of El Tri and provide a needed boost for North American audiences.

It might be weird to say this, but when Belgium face England in the group stage it will be the former that has the greater wealth of Premier League talent than the latter. Belgium was a popular dark horse selection four years ago when they made the quarterfinals and there is no reason to think why they won’t be much improved this time around. Kevin De Brunye has blossomed into the best player on the best team in the Premier League at Manchester City, Eden Hazard and Romelu Lukaku are two of the league’s consistent top scorers, and the defense will be anchored by Vincent Kompany, Jan Vertonghen, and Toby Alderweireld. Can England match that potency from front to back? It will be a tall task and the likes of Harry Kane, Marcus Rashford, Raheem Sterling and others will have to find a way to step up on the world’s biggest stage to answer the challenge.

It’s the ultimate David vs Goliath showdown in a World Cup group stage game. If Iceland is somehow able to carry their Euro 2016 form into 2018 and gain a result against Argentina, it will send shockwaves throughout the tournament. Not only would it position Iceland favorably to do the unthinkable and reach the knockout round once again, it will likely send all of Argentina into a panic. This could be Lionel Messi’s last best chance to finally lead his nation to a major tournament victory. Argentina lost in the final of the 2014 World Cup, 2015 Copa America, and 2016 Copa America. After all the drama that Argentina has faced the last few years, they’ll need to start the World Cup off on the front foot.

How could it get any more interesting in the group stage than this? Portugal-Spain is a fantastic rivalry game. The top spot in Group B will more or less be on the line even though it’s the first game (and along with it a favorable matchup against the runners up of Group A). It will feature two of the tournament favorites and one of the biggest stars in the world in Cristiano Ronaldo. And if that wasn’t enough, Spain just happened to fire their manager just two days before their first World Cup game after it was announced that Julen Lopetegui had accepted the Real Madrid job vacated by Zinedine Zidane. Narrative overload!