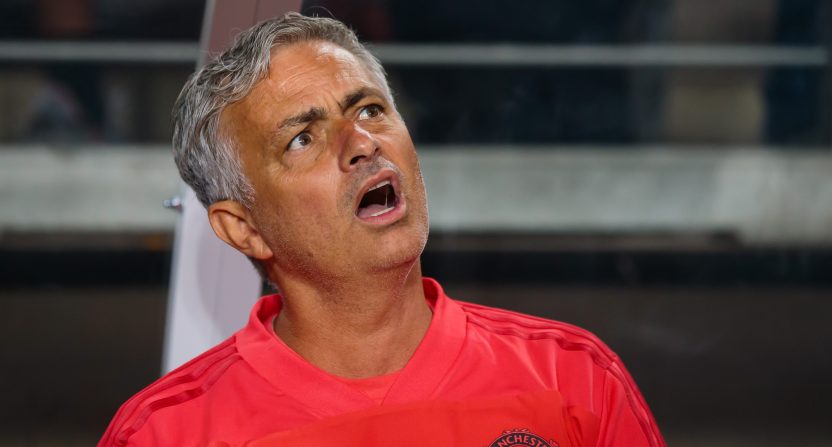 You don’t have to be a Manchester United fan to have realized that something was wrong this summer. Even with manager Jose Mourinho’s reputation for always being grumpy this summer, he took it to a whole new level. Just look at some of the headlines from The Guardian this past summer:

Now, there’s a lot unpack here. For starters, all these headlines have appeared in the past three weeks and I’ve left out the ones dealing with dejected players Anthony Martial and Paul Pogba.

Forget the fact that Mourinho complaining about winning preseason tour games is difficult because he’s missing World Cup players is laugh out loud funny considering Manchester City, and all of United’s rivals, had to do the same this summer while United trotted out 10 senior players in each game. We know that Mourinho is simply already creating excuses in case United doesn’t get off to a good start this season.

Mourinho’s moaning this summer has not only been above and beyond but has also somehow managed to be both very in line with his past behavior, while also being astray from his past behavior. Mourinho lashing out against his club and the board is nothing new, but he usually waits until the season starts to do so. In the summer he’s usually peppy. Hell, even Mourinho’s final season at Chelsea, which ended in disaster, began with him in a good mood as he gave his players an extended summer break as a reward for winning the Premier League the previous season.

Perhaps this summer is different because Mourinho knows that even if he had a full strength squad, he doesn’t have a chance of competing with Manchester City for the title this year. Or perhaps there’s something even bigger at play.

Mourinho’s biggest gripe this season has been the lack of transfers at United. While he tried to hide his disdain and frustration with the board at the start of the summer, now he’s calling them out directly. He’s even accussed the board of not backing him.

Accusing the board of not backing him after they have spent over £200 million in his first two years, the second highest amount in the Premier League, is pretty out there. However, in this instance Mourinho may actually be right.

Last January, United and Mourinho agreed to a one year contract extension, making his contract with United a four year deal. I wrote how this “extension” was nothing more than insurance for both sides. The extra year would give Mourinho a higher buyout should United decide to fire him. On the other side, if Mourinho were to get poached away by another club, United would get compensation. At the time, Mourinho was heavily linked to a summer move to PSG.

But then United’s season went into the toilet and when the summer came around, PSG decided to hire Thomas Tuchel, leaving United stuck with Mourinho and facing a massive buyout should they decide to fire him. While money isn’t really an object for the club, they’re still paying David Moyes to not manage them and paying a second manager not to manage the team didn’t seem like a great option.

That left the club with one choice; rely on Mourinho’s past history to repeat itself.

The good thing about Jose Mourinho’s massively inflated ego is that it’s made him very predictable. The man takes all the credit when his team wins, and blames everyone else when his team loses. But he can also see when he can no longer win with a team, and when that happens he’s very quick to throw the club under the bus (usually by saying the board isn’t backing him and he can’t win if they don’t spend money) before quitting and blaming the board.

If this is Ed Woodward’s plan, it seems to be working right on schedule.

This summer, United have made three signings: Brazilian midfielder Fred, brought in to replace sparsely used Michael Carrick, 19-year-old fullback Diego Dalot, a man for the future, and 35-year-old Lee Grant, a third goalkeeper. None of these players make United better this season, and none are Mourinho players.

Ed Woodward has finally decided to separate Manchester United from Mourinho United. As of now, he’s not breaking the bank to sign Toby Alderweireld, yet another 31-year-old whose best days are behind him and will have no resale value. He’s not selling out of favor players Anthony Martial or Paul Pogba because that would be a long-term disaster for a club that would hurt them long after Mourinho is gone.

Woodward is no longer backing his manager. He’s knows that’s going to make Mourinho quit and he’s just waiting it out so the club doesn’t have to sack him. The writing is already on the wall at Old Trafford.

Now it’s only a matter of time.