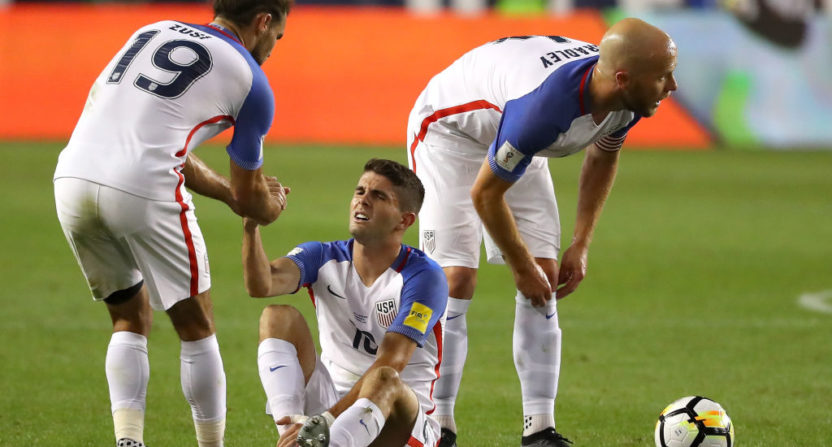 I’m going to be honest, I am nervous right now. Very nervous. Any semi-casual fan of US Soccer should be right now, because the US Men’s National Team is in serious danger of missing out on the 2018 World Cup. And it would be unfathomably disastrous for a program that obviously has seen so much improvement especially over the last few years.

The USMNT is in danger of wasting golden boy and superstar Christian Pulisic’s first World Cup cycle, as well as a core team that made the semifinals of the Copa America Centenario, won the Gold Cup and, despite recent poor performances and mismanagement, includes world-class talent capable of competing on a world stage.

Everything comes down to Friday’s all-or-nothing home game against Panama in Orlando (7:35 pm ET kickoff, ESPN). In the CONCACAF Hexagonal standings, Panama hold the third and final automatic qualifying spot, followed one point behind by the US in the playoff spot (fourth would mean a home-and-away playoff in November against Australia or Syria) and fifth-place Honduras, tied with the US on nine points but far behind on goal differential. There are two games remaining for each side; the United States go to Trinidad and Tobago on Tuesday after the Panama match, Los Canaleros host Costa Rica the same night, and Honduras have to deal with a road match in Costa Rica followed by a home game against Mexico.

Simple math tells us that with a loss, the United States would be competing only for fourth, and flying out to Australia or Malaysia (where Syria play home games) as part of a two-leg Asian playoff. A draw would necessitate at least a Costa Rican point in Panama as well as a win at T&T, preferably avoidable because Los Ticos have very little to play for at this point (they’re essentially assured of qualification) and going into Trinidad needing a win is tough. T&T aren’t a great team and are all but eliminated, but away CONCACAF games are always tough and that game will be on tall grass in burning heat. Not easy.

The US need to win on Friday, which should not be hard considering the two teams’ level of skill, but Panama always play the US tough, as was seen in their March 1-1 draw in Panama City and another hard-fought 1-1 draw on US soil in the Gold Cup this summer. Not to mention, Panama is looking for a way to payback the United States after knocking them out in 2014.

What especially worries me is the United States’ more-than-dismal September performances, in which they put themselves in their current predicament by flaming out against Costa Rica in New Jersey and then barely scraping out an unseemly road draw in Honduras. Pretty much everybody except for Pulisic and the subs in Honduras were sluggish, mistake-prone and generally terrible in September, made even more worrying by their somewhat unconvincing Gold Cup triumph in July.

Bruce Arena made some questionable lineup decisions and there were some crucial injuries to deal with, but the ugly truth is that everybody just didn’t play well last month, and that beats out any tactical analysis we can come up with. Even knowing DeAndre Yedlin is healthy, all we can hope is that the players come out in Orlando with real urgency and, frankly, an ability to adequately play soccer.

It’s hard to predict what Arena will do with his starting XI, but this is what I’d like to see: 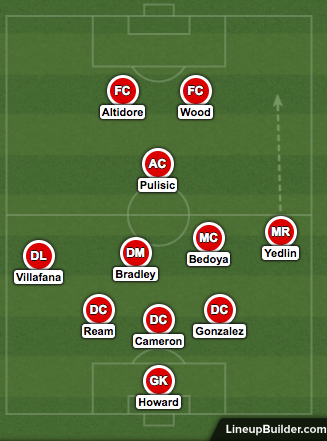 A 4-1-3-2 shape has generally been the USs favorite formation because it put Pulisic in the middle while keeping two strikers up top. But after Arena skillfully and effectively implemented a 5-4-1 at the Estadio Azteca in Mexico four months ago, and after a three-at-the-back was used to more success in the last 20 minutes in San Pedro Sula, we’re seeing that moving away from a four-at-the-back is a valid option (which I wrote about in June).

They have the personnel to do it. Geoff Cameron can anchor a three-man central defense, and has the athleticism to step out of it; Yedlin can get up and down the flanks with speed rarely seen anywhere in the world; and, most importantly, Pulisic is given more attacking freedom than in any other shape. It’s tough to know whether he’s best on the wing or in the middle at this point in his young career, so given he’s the USA’s best player, why not just let him go out and try stuff?

The next step, then, is finding creativity beyond Pulisic, which has been a major concern for Arena. Benny Feilhaber was brought in for this purpose. I’ll admit that this issue is not addressed as much as some would like in this particular XI, which obviously omits Benny, but we should not discount how much more effective an overlapper and wing-back Yedlin is than Graham Zusi. Combined with Jozy Altidore torturing center backs up top next to ruthless channel-runner Bobby Wood, this should be doable.

Clint Dempsey’s role is the other major talking point. One could argue he should be given 90 minutes to maneuver around Panama’s defense and score the crucial goals he’s become known for, but an arguably better case could be made that a partnership of Altidore and Wood is more effective for the first 60 to 70 minutes, with the change-of-pace (and 34-year-old) Dempsey waiting in the wings for 25 minutes of hard work.

In general, you could do a whole lot worse than a 3-5-2 with Christian Pulisic running around freely joined in attack by a track star wing-back, a physically-dominant hold-up No. 9 who beasts on center backs for a living, and an agile second striker with a penchant for important goals. This, combined with a comfortable role for Michael Bradley — who, of course, is MLS’s best defensive midfielder as a No. 6 in Toronto FC’s three-at-the-back — and an in-form center back trio makes this the USMNT’s best look. Let’s hope Arena uses it.

No matter what starting XI is put out on the field, though, it comes down to the simple fact of whether the United States can put together a good, effective, pragmatic performance capable of beating a desperate Central American team that has produced ugly 1-1 draws in each of their last four meetings. They are good enough to accomplish this, and are far more talented than their opponent. This does nothing to assuage my fears.

So on that optimistic note, we can only hope the US go out, play well, and finish with a comfortable victory. Please.