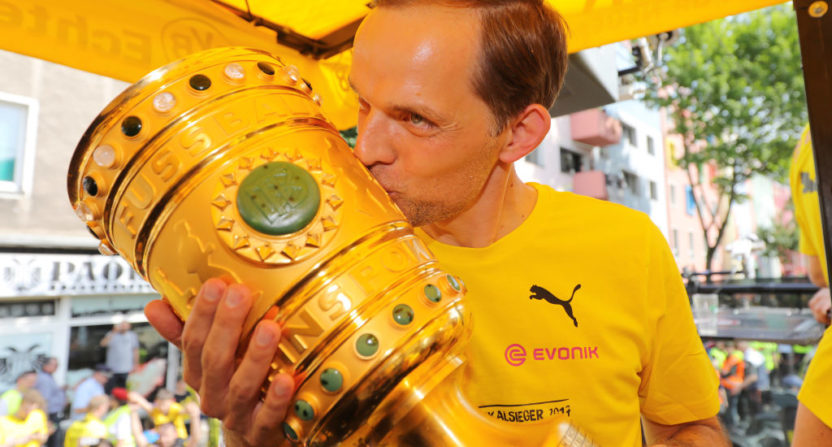 Following Borussia Dortmund’s DFB Pokal victory, Thomas Tuchel’s celebrations were rather muted. His players danced and sang with the traveling fans in Berlin. Tuchel would choose to celebrate from a distance, as he always has. He is very much the anti-Jurgen Klopp. The 43-year-old isn’t full of the same raw emotion that emanated from his predecessor. Where Klopp was exuberant, Tuchel was more calculating. His demeanor might not have been the only reason, but two days after lifting silverware, Tuchel was gone.

German tabloid Bild reported that a 20-minute meeting between club and coach resulted in the Former SSV Ulm defender’s dismissal. Tuchel joined Twitter early this morning and shortly after confirmed the news. He thanked the fans for “two beautiful, exciting and eventful years.”

Tuchel arrived in the Ruhr Valley as one of the game’s best young managers. His slick, possession style was seen as Dortmund’s response to Pep Guardiola. Having recently quit Mainz the previous year, Tuchel was a hot commodity. The German manager could have managed at any number of big clubs, home or abroad. He chose Dortmund.

After two years, his time at the club is now over. Having failed to close the gap to Bayern Munich, Tuchel was shown the door. There seemed to be a growing disconnect between the coach and management for some time. With that disconnect seemingly creeping into the dressing room as well, Dortmund CEO Hans-Joachim Watzke had seen enough.

This disconnect, however, isn’t entirely the fault of the coach. Tuchel is not a charismatic figure. Anyone at Dortmund that expected him to show the same fiery passion as Klopp wasn’t paying attention. But in hindsight, it seems likely that Tuchel’s sacking is much more about the manager’s personality and not results. This is very much a failure of management for not being able to play nice with their manager. Sure, Tuchel’s somewhat distant personality might not be the easiest to deal with, but he’s gotten results.

When you look at Dortmund between the white lines they have been very successful under Tuchel. In his two years, Dortmund never lost at home. The club also finished with a points average of 2.09 per match over two seasons. That is the highest in club history. Dortmund did have some problems in defense, but for the most part they were solid.

Dortmund was building a very impressive team under Tuchel. The German manager gave plenty of playing time to a few high profile teenagers like Ousmane Dembélé and Christian Pulisic. The former scored 10 goals and racked up 20 assists this season. He turned 20 two weeks ago. To the delight of most Americans, Pulisic had a breakout year as well. The US international was involved in 13 goals for Dortmund this year. It looked as if Tuchel was putting together a great young squad at the Singal Iduna Park. When you consider Dortmund lost Mats Hummels, Henrikh Mkhitaryan and İlkay Gündoğan last summer, Tuchel has done a terrific job.

However good of a job Tuchel did, it apparently wasn’t good enough. The coach clearly had the support of many of his young players, especially Dembélé. However, some of the veteran leadership had begun to question their manager’s decisions. Marcel Schmelzer questioned the benching of Nuri Sahin in the cup final. The captain’s comments suggested that Tuchel might not have the full support of his dressing room.

The question now inevitably becomes, what’s next? For Tuchel he’s proven himself as a smart tactician, with a robotic personality. There are a long list of clubs that would happily hire an expert tactician, even if a cold, calculating personality was attached. Tuchel will only be out of work as long as he wants. He might take a sabbatical and survey his options a little more in depth, but when he’s ready he’ll be back.

The situation is much more precarious for Dortmund. Tuchel’s departure could set up a turbulent summer for BVB. There are rumors that the Bundesliga’s top scorer, Pierre-Emerick Aubameyang, already has one foot in Paris. Losing him would be an even bigger blow than Tuchel. First, however, Dortmund need to find a new coach. Lucian Favre is being touted by some German sources as the man for the job. The former Gladbach boss is seen as a quality coach. He was rumored to be in line to take over in Munich following Guardiola’s departure. Favre would be a good fit in Dortmund. He’s dealt with young players before in his career and would be a good choice to take Dortmund’s current crop of young talent to the next level.

The problem for Dortmund, however, is bigger than just naming a new coach. Rather, the issue might be the club’s ultra-passionate culture. To be clear, the passion of Dortmund fans should be above reproach. They are some of the best fans in the game. But for the club, they can’t hold out for a coach to always have that same level of enthusiasm. As long as they do, whoever sits in the dugout runs the risk of being dismissed as not Klopp.

Dortmund’s motto is “Echte Liebe” which means “True Love” and their supporters really take that to heart. Tuchel’s greatest sin at Dortmund might have been not embracing that in a way that Watzke deemed appropriate. Perhaps Tuchel wasn’t the right man for Dortmund. Perhaps the disagreements between the club, the coach and the players ran deeper than just personality differences. But if Dortmund expected Tuchel to be Klopp then he was doomed from the start, and that is unfair to him. On the pitch, he was on the verge of building a team to compete with the likes of Bayern. He was getting results, including a trophy.

Isn’t that what ultimately matters?