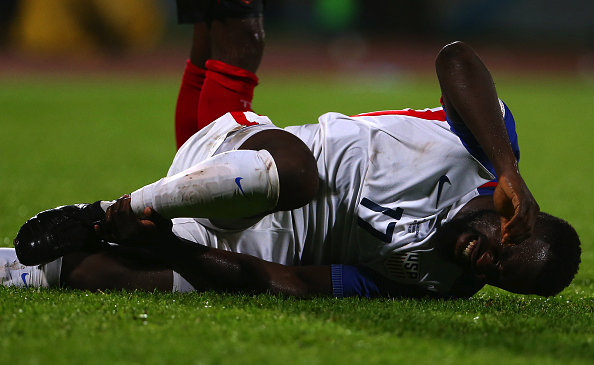 The U.S. did not qualify for the 2018 World Cup. There were no flukes. It was deserved.

Others will look at U.S. Soccer development in a broad sense. We need to. We’ll get the inevitable “why aren’t our best athletes” playing soccer column from someone. But broader questions aside, World Cup qualification is about a single team and the players available right now. That team played in a single competition and failed.

Here are three reasons why:

Soccer is a young man’s sport. When a player’s legs start to go, veteran guile can only do so much. Players peak earlier than they do in other American sports. The U.S. left Brazil in 2014 with serious roster turnover required. The roster never turned over. Fourteen members of the 23-man squad that went to Couva were 30 or older. Only five – DeAndre Yedlin, Bobby Wood, Christian Pulisic, Paul Arriola, and Kellyn Acosta – are younger than 27. Teams that do well have a core of strong players peaking in their mid-20s. The U.S. did not.

Age was crippling in midfield, where the U.S. could not protect their defenders. No one was pushing Jermaine Jones (35) and Kyle Beckerman (35) for places during much of the cycle. Tim Howard is 38. He once was a world-class goalkeeper. He had an excellent 2014 World Cup. He’s not that guy anymore. He lost his place at Everton. He moved on to semi-retirement with the Colorado Rapids. No one stepped forward to challenge him. All three goalkeepers in the squad were 33 or older. None of the others have more than five national team caps. We’re a long way from the mid-2000s where the U.S. had four starting goalkeepers in the EPL.

Broader development issues must be addressed. But sometimes, a gap just happens. The Netherlands has produced some of soccer’s greatest ever players and teams. They have reached three World Cup finals including in 2010. Right now, they can’t qualify for a major tournament. A similar phenomenon has plagued Italy. This may be the largest pool of players the U.S. has ever had, but beyond Pulisic, it’s depressingly shallow.

MLS Deserves Some of the Blame

Jurgen Klinsmann didn’t like MLS. He was a great player who played in Europe’s top leagues. He felt players, to be great, had to push themselves at the game’s top level. There’s a level of professionalism in Europe that one doesn’t find in the U.S. MLS has undergone near constant expansion for the past decade, with expansion fees now ballooning to nine figures. The league had 12 clubs in 2006. It has 22 now, with plans to expand to 28. The league was not bursting with talent before the expansion started.

MLS has expanded its designated player spots as well. MLS clubs can afford large salaries to attract American stars back to the league. MLS can also pay to keep budding stars from leaving. That’s great for MLS, but not for maximizing the potential of the national team.

Sixteen of the 23 players who went to Trinidad last night ply their trade in MLS. Only four – Yedlin, Wood, Pulisic, Cameron – play in Europe’s top leagues. For comparison, Bob Bradley’s 2010 World Cup team had just four MLS-based players. Klinsmann had been bypassing MLS for American-eligible German and Mexican players. Bruce Arena, an MLS coach, was supposed to refurbish the squad with overlooked MLS players. That experiment didn’t go so well.

CONCACAF is the easiest major confederation to qualify from. Even if the away trips are tougher than they look on paper, three of the six teams in the final round make it. Even the fourth-place team gets a reasonable shot to make it through the playoff. Compare that to Europe where teams need to win difficult groups; CAF, where teams need to outright win the group; or CONMEBOL, which is so brutal Argentina needed Messi magic on the final day to qualify and did so at the expense of reigning two-time Copa America champ Chile.

The U.S. needed a draw at Trinidad & Tobago to edge past Panama and Honduras. They were still in a solid position to qualify heading into Tuesday night despite only winning three of their first nine Hex matches. They still failed. The Hex did not exist the last time that the U.S. failed to qualify for the World Cup. Neither did much resembling professional soccer in the United States.

Tuesday night should have been a cataclysm. It was a comprehensive failure to accomplish men’s soccer’s most basic task. Yet U.S. officials went into “all is well” mode. Per Bruce Arena, there is “nothing wrong” with what U.S. Soccer is doing.

“There’s nothing wrong with what we’re doing,” said U.S. manager Bruce Arena. “Certainly as our league grows, it advances the national team program. We have some good young players coming up. Nothing has to change. To make any kind of crazy changes, I think would be foolish.”

Per U.S.S.F. President Sunil Gulati, U.S. Soccer has some “very good” pieces in place and the program is “coming along.”

“So we will look at everything, obviously, all of our programs, both the national team and all the development stuff,” said Gulati. “But we’ve got some pieces in place that we think are very good and are coming along.”

Coming along to where? To what? If now, after missing the World Cup, is not the time to panic and make changes, what would be an appropriate time? Maybe there wasn’t a good response to an inexcusable elimination in the Hex. But those responses came nowhere close. They speak of a small, tone-deaf decision-making body accustomed to almost zero public accountability.

From the reactions Tuesday night, it’s clear that change is necessary and must start at the top. To be frank, it has been clear for a long time.

Brad will be racing the "Tribute to Veterans" Ford this weekend at Road America.

Brad will be racing the "Tribute to Veterans" Ford this weekend at Road America.