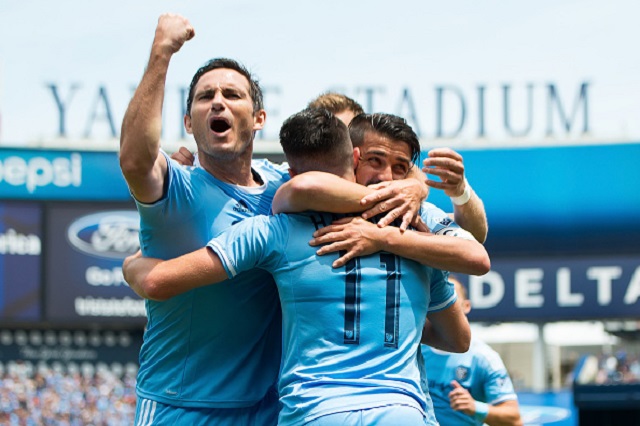 It’s said that a rivalry does not truly begin until both teams have achieved victory. In that case, the New York Derby was officially born Sunday afternoon after NYCFC’s 2-0 New York Derby win over the New York Red Bulls in front of 33,613 at Yankee Stadium in the Bronx.

The win was City’s first in five tries over the Red Bulls dating back to NYC’s inaugural season last year, and came 43 days after RBNY’s 7-0 victory that matched the largest margin of victory in MLS’ 21-year history.

“They enjoyed their win, possibly too much after the last game,” NYCFC midfielder, and English legend, Frank Lampard told The Comeback after the match. “You can’t keep getting beat by your rivals, and we’ve been doing that. So it was time for us to step up.”

Ever since Major League Soccer announced that a second New York team would be joining the league, this crosstown rivalry was hyped and promoted as something that would help the sport of soccer grow in America. NYCFC’s entry into the league as MLS’ 20th team also coincided with a landmark new television contract signed with ESPN and Fox, the latter of which was looking to grow its own new entity in Fox Sports 1.

After the Red Bulls won the first-ever meeting between the two clubs last year, the two sides played in front of 48,047 fans in the Bronx on ESPN, a 3-1 loss for NYC. On May 21 of this year, Fox decided to put an MLS match — the NY Derby — on network television for the first time, which was one of the biggest events of the season noted by FS1 announcers John Strong and Alexi Lalas in our MLS season preview. Despite an incredible amount of ad dollars and social media content devoted to the match, nearly 10,000 fewer fans showed up to the match compared to the clubs’ first meeting at Yankee Stadium and only 636,000 watched on TV.

Despite the wide-reaching and admirable efforts of the league to make the NYCFC-Red Bulls rivalry at the level of some of New York’s more famous rivalries — Rangers-Islanders, Giants-Jets, Knicks-Nets — the league is struggling to attain that lofty goal. Naturally, it takes time for a rivalry to grow, for trends and storylines and a longer-term narrative to emerge, for casual fans who may only attend one match a year to really get behind the product MLS is selling and to embrace red versus blue, English-backed upstart up against energy giant incumbent.

“It’s bragging rights,” Red Bulls fullback Sal Zizzo — who was taken by NYCFC in the 2014 expansion draft before being immediately traded to RBNY — told Red Bull Radio prior to Sunday’s match. “Having two teams in New York, even if you don’t want to create it on the field the media and everyone creates it and it’s been brought out on the field and now it’s within the players. It’s a big test and they’re really fun games to play.”

What Zizzo touched on is the creation of the rivalry by the media and “everyone,” which includes, but is not limited to, the league and its devoted fan base. The league’s top rivalries have been cultivated over time. Seattle and Portland have been duking it out since 1975, during their days in the NASL; New York and DC have had intense battles going back 20 years; Los Angeles and San Jose, Colorado-Real Salt Lake and FC Dallas-Houston have stood the test of time and have grown as natural geographic foes.

In a 2015 article for ESPNFC, Graham Parker warned against “a plastic rivalry, particularly one encouraged by MLS HQ.” Attendance for the New York Derby matches have been slowly declining, which may indicate that the novelty of the rivalry is starting to wear off a bit.

“The energy of all the games have been at an immense level,” Red Bulls head coach Jesse Marsch said after Sunday’s match. “For us, I think we’ve known since day one that this is for real. This has been great, the lead up to them has been great. I think it brings out the best in teams and the best in players.”

“I think it’s there already,” Lampard told The Comeback regarding the rivalry.

Truly great rivalries need to be built, not manufactured by a marketing team in a gleaming office tower. Over time — rather than overnight — and some important, meaningful matches and some memorable, seminal moments, MLS will try to change the New York Derby from more of a plastic rivalry to one that will help the league reach new fans and bring the sport to new heights in the United States.

“The emotion and the adrenaline that’s going to come playing in Yankee Stadium, especially against the blue team, is going to be good,” Red Bulls goalie Luis Robles told Red Bull Radio before the match.

Yankee Stadium may not be very good for soccer on the field, but it serves as an iconic and ideal setting for the optics of the league. Red Bull Arena is an excellent soccer venue. The NYC market cannot be topped in this country. NYCFC and the Red Bulls are currently first and fourth in the Eastern Conference standings.

All the ingredients are there for the New York Derby to become great rivalry to go up against the more longstanding, traditional New York sports except for time. And time is one of the only things in the world that simply cannot be rushed.