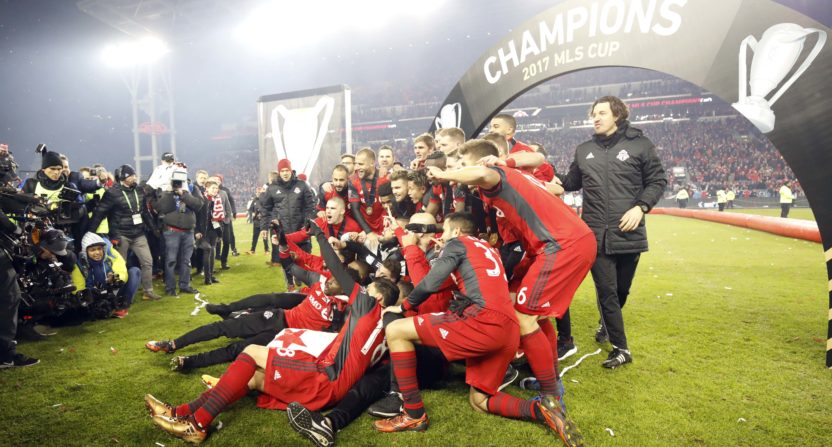 The short history of MLS is often defined by eras. MLS 1.0 was the initial few years of the league, with struggles at the gate, bizarre rules, contraction of teams in Miami and Tampa Bay and near-extinction.

Then MLS teams began to construct soccer-specific stadiums, often in far-off suburbs, and the league began to slowly balloon in size. During this time, the Designated Player was also introduced. This was MLS 2.0.

MLS 3.0 is the current era defined by rapid expansion, growth in salary budgets and the league’s belief as to what its future may be.

Toronto FC came into the league with fanfare and hype in 2007, but was the most moribund and listless franchise in the league from then until 2014. Often finishing near the bottom of the standings, TFC spent money on horrible players and tried to execute bizarre visions of “plans,” such as with the Ajax in Toronto disaster. That was MLS 2.0 Toronto FC.

MLS 3.0 Toronto FC are the defining team in an era of big spending, but with a smart plan behind it. No matter how much they spend, they will be defined by how well they spent the resources available to them, MLSE’s heft or not.

Since they arrived in MLS, Toronto FC was always willing to spend money, but always did it terribly. Mista, Torsten Frings, Danny Koevermans, Jermain Defoe and Gilberto were all big-name, big-money busts wearing Toronto FC red. And not only did they whiff on the biggest signings, they couldn’t construct a roster around them either.

But with Tim Bezbatchenko, Bill Manning and a defined plan in place, Toronto FC used their financial heft to construct a roster that is far more than just Jozy Altidore, Michael Bradley and Sebastian Giovinco. Victor Vazquez is a TAM (targeted allocation money) signing who’d be a DP almost anywhere else, but good budget management allowed TFC to fit him around the core already constructed.

TFC has used the draft effectively to add important players to their core, like Alex Bono and Nick Hagglund. They found players on the scrap heap, like Marky Delgado and Eriq Zavaleta, and turned them into important contributors. Add in a few MLS mainstays like Drew Moor and Steven Beitashour, and you have the perfect modern MLS roster that combines big-money spending with smart signings to create a roster that is deeper than any in league history.

No team can match what this one has done in terms of finding and acquiring talent to fit them into an overall plan. Yes, they have an amazing amount of financial heft behind them and a top-notch academy, but no team in MLS uses every player acquisition method available to them the way that this team does. That is what makes them different in MLS 3.0, the era of TAM and GAM, young DPs and rapid expansion. Other teams may be able to make big DP signings, but can’t supplement the roster the way TFC does.

The LA Galaxy have all the financial clout they could ever need to dominate the league, but outside of their DPs and a few others, their roster painfully lacked depth. Seattle fell just short because they didn’t have the extra touch that Victor Vazquez brought to TFC in the final third in MLS Cup 2017. Those are the kind of players that TFC has identified better than anyone else: not quite DPs, but above the average player level.

Other teams like NYCFC and Atlanta among others have plenty of financial clout to spend big in the transfer market, but no club spends big and as wise as Toronto FC continues to do, which is a critical distinction. In MLS 3.0, it’s not just spending big that matters, it’s spending big and wisely that matters. Without their DPs, TFC would be a surefire playoff team, that is how well they have constructed their roster.

Everyone else in MLS, from Seattle to the Galaxy, has to find a way to duplicate, replicate and exceed what Toronto FC has built, and that is going to be exceedingly difficult. Very few clubs can match the confluence of factors that TFC has worked so brilliantly in their favor. Parity still exists in MLS with the salary cap and budget, and with GAM/TAM too, but no club can do what Toronto FC can do in combining everything to create the deepest roster the league has ever seen, and now, one of the best.

That’s the challenge for the 22 other teams building a roster for 2018. How can you replicate what Toronto FC has done in seemingly breaking a playing field that has been so artificially leveled?

The answer: it’s hard. It took Toronto FC 10 years of failed experiments and plenty of money down the drain to figure it out. That is something else that cannot, and will not, be replicated.