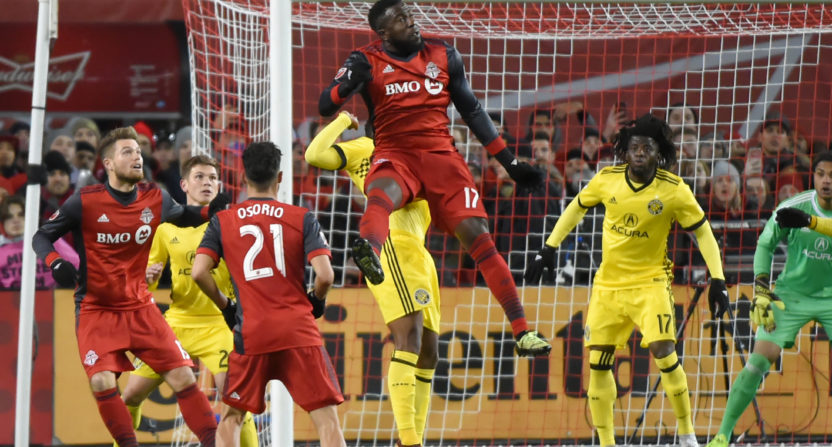 The second leg of the MLS Eastern Conference final between Toronto FC and Columbus Crew SC had plenty of built-in intrigue. From TFC’s quest for league history to Columbus’ relocation situation, in addition to the pure “play for a berth in the final” storyline. That’s all well and good, but the soccer really became must-watch after the result of the first leg, a 0-0 draw.

Both teams went into leg 2 confident in their chances, lessening the effect of game state on tactics and creating one hell of a chess match between two of MLS’ most innovative and adaptive managers. Toronto FC’s 1-0 home win, which gave them the right to host MLS Cup on Saturday, December 9, was a fun example of what every soccer league in the world would like to see more of: smart, aggressive tactics and constant rearrangement intended to throw opponents off their game.

TFC’s Greg Vanney and Crew SC’s Gregg Berhalter went back forth from the beginning, attempting to do whatever they could to exploit weaknesses and throw new wrinkles into the strategies that brought them within 90 minutes of the championship.

Berhalter set the tone with a shocking lineup decision, moving away from the 4-2-3-1 he had ridden for most of the Crew’s hot streak to something of a 3-4-2-1, starting rookie Lalas Abubakar on the backline next to Josh Williams and Jonathan Mensah and trusting DP winger Pedro Santos to play as a left wing-back. He let the front three of Justin Meram, Federico Higuain and Ola Kamara stay forward.

What Berhalter did with this lineup was the first chess piece moved across to Vanney’s side: he created a remarkably organized defensive shape to simultaneously take away both Toronto FC’s possession patterns and goal-scoring superstars. Defensive midfielder Wil Trapp sat at the center of a man-marking system that hounded passing channels in central midfield and followed the trio of Sebastian Giovinco, Jozy Altidore, and Victor Vazquez all over the attacking half.

Mohammed Abu, filling in for a suspended Artur, has struggled often this season, but when all he had to do was sit on Vazquez’s tail, he handled himself pretty well. It became clearer and clearer as the game went on that the Spaniard was marked out of the game, forcing him to find different areas to receive the ball. These are decidedly less threatening positions: 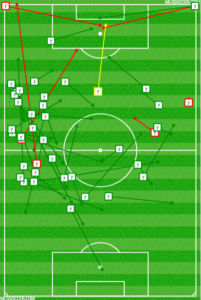 That’s Vazquez’s passing map from the first 45 minutes. Notice how much time he spends on the left flank. Columbus wanted it that way.

The Crew did a very good job of organizing their press in a way that blanketed TFC’s primary distributors out of the back (notably, d-mid Michael Bradley). Berhalter’s front three were able to converge in the middle of Toronto’s possession thanks to the cover provided by the back-five, which forced the Reds wide and made it difficult to assemble sequences capable of breaking down the second level of Columbus’ compactness.

Individual errors still occasionally hurt the Crew — Williams dragged down a TFC player in the box on a first-half corner, drawing a penalty-kick that was stoned by Zack Steffen — but they were the better team for much of the 90 minutes. Credit goes to Berhalter for winning the chess battle.

However, Columbus lost the war. Bradley was just as good or better than Trapp, working like the machine he is to cut off every half-space and minimize the effectiveness of the Black and Gold’s duo of inverted wingers and their channel-running goal-scorer; Kamara, Meram and Higuain started together for the exact reason of overwhelming the space around Bradley, and they failed.

That group and the attack in general was the ultimate reason why this team of destiny will not have the opportunity to play in MLS Cup. Meram underperformed again, missing numerous chances, and Kamara was offside every time he tried to make a run. Higuain never seemed able to connect.

They struggled to pull apart Toronto’s shape despite wing-backs (Santos and Harrison Afful) that were willing to push forward and occasionally overlap, splashing their inverted creators concept back in their face. More often than not, they overcrowded each other rather than their opponent.

Vanney’s substitutions worked well — he moved his team to something of a 4-4-2 diamond at the beginning of the second half before transitioning to a 4-4-1-1 after the goal. Altidore was superman, shrugging off a painful-looking ankle injury and more than once convincing an anxious Vanney to keep him on the field before finishing a beautiful combination play in the 60th-minute to give the Reds the lead and eventually the win.

This was a really fun game to watch and follow. It would be exponentially better for the league’s quality and entertainment if more managers went about their jobs like Berhalter and Vanney, in addition to some other coaches that deserve props — Patrick Vieira, Tata Martino and Jesse Marsch, to be specific.

Making an effort to be creative tactically produces more opportunities to integrate depth (and, by extension, academy kids), sets innovative precedents and, simply and most importantly, increases clubs’ chances of winning if done right. It is not hard to lay out the positives of flexible, aggressive and reactive coaching, straightforward concepts that have existed since Herbert Chapman’s W-M.

Developing a team identity and then being able to build and adapt from that identity is a skill that too many MLS managers either do not possess or try little to implement. Hopefully this Eastern Conference final will act as another step in an important league direction.