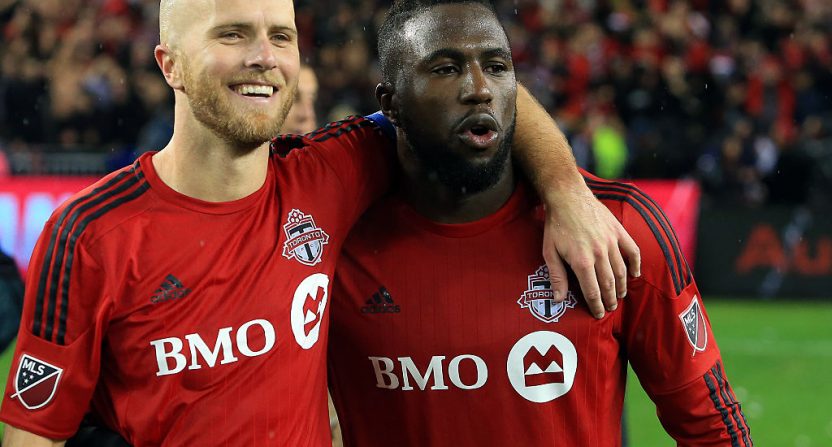 Neither of the MLS Cup finalists from last season had a favorable start to the season. The Seattle Sounders, with Clint Dempsey returning, picked up just six points from their first six games and saw their superstar (Nicolas Lodeiro) struggle to regain his 2016 form. They’ve picked it up in the two games since — with four points and six goals against LA and New England — thanks to a move from Brian Schmetzer that shifted Jordan Morris to the wing, but they remain behind the red line in the Western Conference.

Toronto FC were a popular Supporters’ Shield pick after losing in the final last year, but they, like Seattle, had a bit of trouble early on. They won just once before April 21st and while they lost only once (away to Columbus), they often were uncharacteristically listless in the final third, most notably in a season-opening 0-0 draw to Real Salt Lake, who would soon fire their manager.

Like the Sounders, nobody should have been panicking for Toronto, because four of their first six games were on the road and Sebastian Giovinco spent time injured. That brief slump can now be declared over after two convincing home wins.

A 3-1 result against Chicago and a 2-0 win over Houston, particularly in the comforts of BMO Field, wouldn’t have been very telling last season, but those two teams have proven to be legitimate contenders this season. Those are solid wins, and they get better when considering how well Toronto truly played in those two games, plus the 2-2 draw against Atlanta two weeks prior.

They’ve done a few massive things different, and those have made the difference:

The striking partners are back into their “co-MVP dominate everyone” mode, and teams should be afraid, because this is deadly:

When these two are good, they’re *good*. Altidore maneuvers in front of a defenders, draws more defenders, and opens space for a late-running Giovinco, who likes to drop slightly deeper and either run at the backline and create mismatches or receive a layoff from Altidore, who terrorizes center backs like none other.

Add in the fact that both are elite finishers with different skill-sets — Altidore on quick-turn, back-to-goal finishes and headers, Giovinco on weaving runs, long golazos, and long weaving run volley golazos — and you have what is, by far, the best striking partnership in the league.

2. Victor Vazquez has been freed: Toronto FC decided last offseason that their primary weakness was their inability to generate offense from places other than the strikers and overlaps from the wing-backs. It seems like an MLS first-world problem, but remember that they failed to score in 120 minutes, at home, in the MLS Cup Final.

The solution was Victor Vazquez, a 30-year old former Barcelona midfielder who can get forward and create in the final third unlike others on the team. Vazquez is unlike other midfielders on the roster — like Michael Bradley, Jonathan Osorio, and Armando Cooper — in that he is more comfortable playing the ball forward and proactively than distributing sideways and backwards. Having a player stationed behind the forward players (which are often the strikers and the wingers) and adding 1) an ability to hit final balls and 2) a secondary goal-scoring option from the center has been crucial for TFC.

It took Vazquez a couple of games to settle into MLS after stints in Belgium and Mexico. But once he found a comfort level and Greg Vanney gave him a freer attacking role, he started creating: 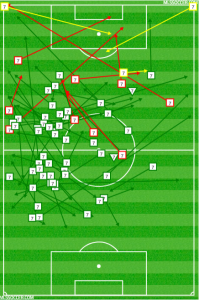 Vazquez takes set pieces well and maneuvers the ball impeccably in the final third for a team that LOVES to possess the ball in the final third. With him on the field, TFC can fulfill their ambitions of stacking three or four players on the backline at a time while having someone to bridge the gap between those players and the deeper midfielders like Bradley and Marky Delgado.

They pushed and pulled the Dynamo’s backline in part thanks to the presence of Vazquez. Similar things happened against the Fire the week before.

3. Raheem Edwards is very good: Drew Moor got injured, which pushed Justin Morrow back to center back, which inserted the TFC academy grad Edwards into the starting lineup. Edwards has been very good, and he knows how to overlap at the right times.

He played a major role in what has become the primary example how good TFC can be:

Here is the entire build-up to the first Toronto goal. 18 passes were exchanged in one minute of possession, and 10 players were involved. pic.twitter.com/JjgQsWTy22

That sequence took one minute and included 18 passes. Ten TFC players were involved (only Morrow wasn’t) and it was ultimately Edwards who provided the assist after sneaking in behind a disorganized Dynamo defense. This is the threat he provides.

It’s also worth noting that Toronto put a lot of time in on set pieces, and are up there with the New York Red Bulls and FC Dallas in effectiveness on them. That’s only another way they can score.