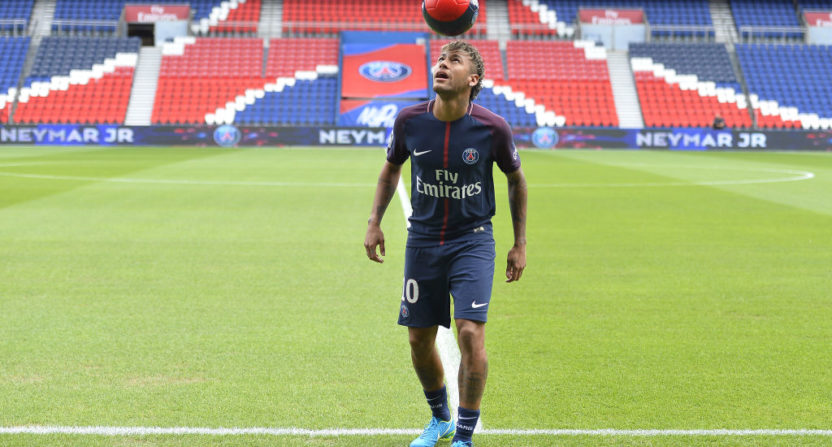 Paris St. Germain more than doubled the world-record transfer fee to buy Neymar from Barcelona. They paid the release clause to get the Brazilian star out of his contract. Barcelona had set that clause to what they perceived to be an absurdly high number to prevent him from leaving. The move leaves the Catalans with a hole in their squad and a stupendous amount of cash to fill it. As Barcelona is finding out, that’s not ideal.

Think of the worst situation to negotiate a fair value for a player. It would be other clubs knowing you are desperate and have more money to spend than what you want to offer.

Even the money alone can jack up the cost of buying players. Premier League clubs, flush from their new TV deals are finding this out. Many of the recent additions to the “most expensive transfers of all time” list are Manchester City trying to buy defenders. Suddenly, Kyle Walker is a $65 million right back. That French striker Arsene Wenger has been eyeing at Lyon, Alexandre Lacazette, now costs more than $60 million.

So other clubs realize Barcelona is desperate. They know Barcelona has a ton of money to spend. Not surprisingly, the Catalans are having a terrible time signing reinforcements. The potential transfer prices are insane.

Barcelona offered Liverpool a package potentially worth $117 million for Philippe Coutinho. Up until this past week, that would have been only a few million off the world record fee. That was an increase from an early reported bid of $93 million. Liverpool, who could use Coutinho in their Champions League campaign, rejected it.

Borussia Dortmund, per a report, turned down an offer from Barcelona for 20-year-old forward Ousman Dembélé that may have been worth a potential $130 million with add-ons. This fee for a player who scored six league goals last season in his first year in the Bundesliga. Dortmund, per reports, may want north of $175 million. Watching with eager interest is Dembélé’s former club Stade Rennais, due 25 percent of any fee Dortmund gets.

Barcelona may need the players themselves to create enough of a stink to make keeping them untenable. Dortmund suspended Dembélé for skipping training. Or they could just suck it up and pay an even greater premium.

The other option would be for Barcelona to go for depth and add players at multiple positions. That seldom works out in this situation. You end up overpaying for a larger number of lesser talents. Tottenham did that the summer they sold Gareth Bale to Real Madrid. They did hit on Christian Eriksen, but not so much on Roberto Soldado, who scored seven league goals over two seasons.

Liverpool restocked up front with Lazar Markovic, Mario Balotelli, Divock Origi, and Rickie Lambert during the summer they sold Luis Suarez to Barcelona. Origi, only 22, still has time to pan out. The other three signings range from not very good to disastrous.

Soccer fans will spot the irony of Barcelona being in this dilemma. This club is perennially in the top 2-3 teams in revenue. It’s the home of the best player in the world, Leo Messi. Barcelona players formed the core of Spain’s World Cup winning side. They have won eight league titles and four Champions League trophies since 2005.

Stealing away a star from a reluctant club and sticking them with a bloated transfer fee is what Barcelona does to other clubs. It was never supposed to happen to them.