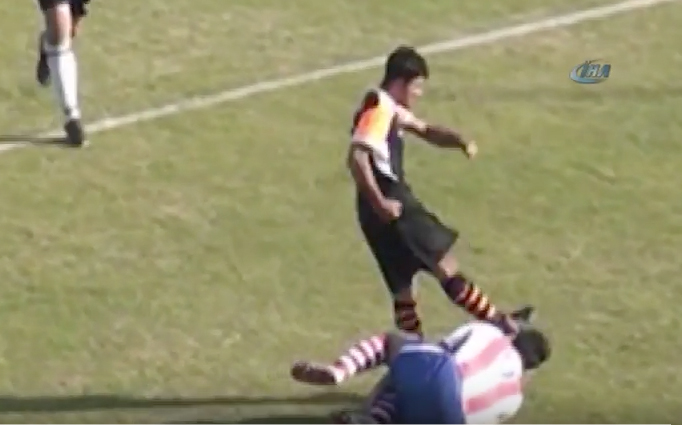 While America is focused on The Joker spearing Batman in a football game between the New York Giants and Carolina Panthers, halfway across the world, an amateur Turkish footballer is reportedly facing “attempted manslaughter” charges for doing this in a match this weekend:

From the Daily Sabah in Istanbul:

The shocking move came in an amateur football match between Dallıcaspor and Sanayispor football clubs playing in the Nazilli district of Turkey’s western Aydın province on Sunday. Sanayispor player Mehmet Değirmenci deliberately tackled his opponent Kayhan Karakaş from Dallıcaspor after a strong shoulder charge. As his action received a red card from the referee, the player turned back to his opponent, already lying on the ground with pain, and kicked him in the face.

Remember, the player received the red card before kicking his opponent in the face.

The report from Istanbul states that the player has been kicked off the team, with Sanayispor publicly apologizing to the injured player and his club.

After the game, Karakaş told the press that he blacked out due to the kick, and he could have died. He pressed charges against Değirmenci for ‘attempted manslaughter’.

The report indicates Karakaş was allowed to return to the game, but fell to the ground with dizziness and nausea before heading to the hospital.

“I continued playing for a while as I was playing in a team that we have established with great efforts. I did not want to leave my friends alone. I thought I could return to the match after a tampon and ice treatment,” Karakaş said. Karakaş received nine stitches in his lip at the hospital.

He told reporters he was lucky the kick hit him in the face near his jaw, because he could have broken his nose “made me blind or break my neck.”

This takes this weekend’s on-field retaliation to a horrible new level.