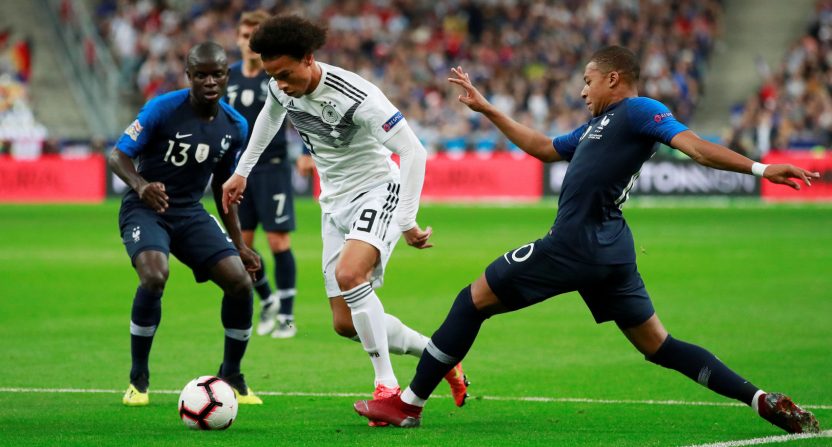 On July 7th, 2016, France defeated Germany 2-0 in a thrilling semifinal match at Euro 2016. At the time, many considered these the two best teams in the world, with Germany being the defending World Cup winners, and France the young up and coming challengers to that title. The fact that France went on to win the next World Cup only seemed to validate those beliefs.

In the coming years, Germany only seemed to get better. Their U23 team finished second at the 2016 Olympics, then their U21s won the U21 European Championships and their “C” team won the Confederations Cup in 2017. There was no reason to think Germany weren’t going to roll right through the World Cup in Russia.

Well you know what they say folks, that’s why they play the games.

Instead of plowing through the competition and possibly getting a rematch against France, Germany was watching the final at home having crashed out in the group stage for the first time ever.

For a team that’s been as dominant for as long as Germany has, this had to have been just a bad dream, a blip on the radar, right? Surely Germany would just asses what happened in Russia, say goodbye to some players, say hello to some others, and everything would go right back to the top of world football.

Enter the UEFA Nations League. People have different opinions on UEFA’s new creation. As a fan, I love it. Competitive matches with players going all out have made these international breaks far more tolerable. Managers like Jurgen Klopp hate it. Adding even more competitive matches to the players schedules could be too taxing for the players. He makes a good point.

After two rounds of play, Germany sit at the bottom of League A Group 1 with just one point. In this past window, they lost 2-1 in France and were humiliated 3-0 by the Netherlands, leaving the Dutch simply requiring a result against Germany, or essentially two points in their final two games to relegate Germany to League B.

Say what you want about the Nations League but it has one undeniable benefit, it’s bringing to light teams’ problems. It’s showing us that Germany’s World Cup disaster was no blip. Their problems are real.

We should have seen a German letdown coming. Germany’s midfield was getting old, they never adequately replaced Bastian Schweinsteiger. They never found a true striker, their center backs were just lacking a bit of pace, and don’t forget the individual players. Mesut Ozil had back-to-back poor years at Arsenal. Thomas Muller, after scoring 33 Bundesliga goals in the two years prior to Euro 2016, only scored 13 in the next two. Julian Draxler, one of Germany’s young future stars, never really hit the heights he was expected to, neither did Julian Weigl. The young German who was dominating at the club level, Leroy Sane, never really integrated into the national team and ended up being left off the World Cup squad.

The red flags were all there, but we ignored them. Why wouldn’t we? Following the loss to France at Euro 2016, Germany soared through World Cup qualifying, winning all 10 games with a +39 goal differential. Their youth and reserve teams were also dominating, giving off the illusion that Germany had a never ending pipeline of talent.

Who cares if certain players were having down years with their clubs? When they met up with the national team they were winning and that’s all that mattered.

Of course that was all an optical illusion. Germany’s World Cup qualifying group consisted of Northern Ireland, Czech Republic, Norway, Azerbaijan, and San Marino. Those teams aren’t even in the same stratosphere as Die Mannschaft. Even with a slow midfield and a slow defense, Germany never had to worry about losing to those teams, none of them are good enough to expose or exploit those problems.

That’s the beauty of the Nations League. Instead of playing minnows, Germany are not only playing teams that are at a similar level to them, but also teams that are good enough to exploit and punish Germany’s deficiencies.

Germany made some changes to their roster after the World Cup, but under the old format they would have jumped right into Euro qualifying and gone back to thrashing smaller teams. By the time Euro 2020 rolls around, we’d all assume Germany were back to their dominant selves. Only then, if they laid another egg would we realize that there were deeper problems present. That wouldn’t be for nearly two more years.

What the Nations League has done is helped teams learn more about themselves. Instead of waiting two more years to learn whether your good World Cup run was due to all your pieces coming together, or just getting a lucky draw, teams can learn about this now. In Germany’s case, they can see that while they made some changes following their embarrassing summer, they still need to make more.

A year ago, we all thought Germany had the depth to be dominant for years to come. One bad summer doesn’t change that, but as the UEFA Nations League is showing us, if Germany want to get back to dominance they better start tapping into that depth sooner rather than later.